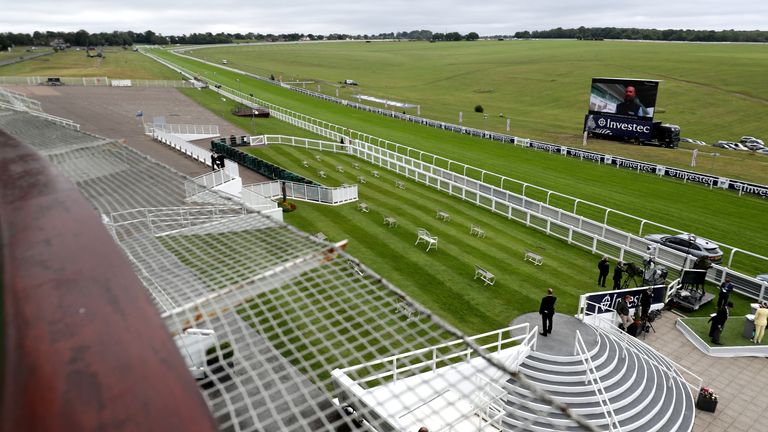 Epsom clerk of the course Andrew Cooper has begun watering the track for this week’s Cazoo Derby Festival.

On Sunday the going was described as good across the course, but a warm afternoon and the decreasing likelihood of rain later in the week has caused Cooper to step in and begin irrigation.

The ground is described as good, good to firm in places for the two-day meeting which starts on Friday and hosts the Derby itself on Saturday – and only those areas which are slightly quicker will be targeted during the initial watering.

“Yesterday was a dry, sunny day here. Temperatures got up to about 20 degrees – and it was a lovely, sunny afternoon.

“We dried out a bit more – and as of nine o’clock this morning, if we were racing here today I’d call it good, good to firm in places.

“You’ve only got to look at the going reports up and down the country and see that a lot of the Flat courses are heading into that territory, so that’s not unexpected at all. It’s exactly where I’d have expected us to be, given the weather in the last week.”

Cooper’s team will apply an initial five millimetres of water to the drier parts of the track, with the forecast in the latter stages of the week the deciding factor as to whether further watering will be needed.

“We’re focusing today on those bits of the track that we would be calling good to firm, or the fast side of good, if we were racing here today,” he said.

“As far as the Derby course is concerned, it’s really only the first half a mile, from the Derby start to the mile start that walks a bit quicker than the last mile.

“We’ll be leaving the last mile, certainly for today, and we’ve decided we’ll put 5mm over that first half a mile.

“In our judgement, the time has come for us to step in and just start irrigation.

“In terms of the forecast, increasingly – this morning even – the shower risk at the end of the week is diminishing.

“There’s still a degree of uncertainty. But here and now, the risk of showers is diminishing – which is one of the considerations to us cracking on and doing some watering.”