It was a case of the young pretender once more beating the old master when Joseph O'Brien, the 27-year-old Irish trainer, defeated his famous father Aidan O'Brien in Australia's greatest race on Tuesday.

Three years ago, O'Brien landed his first Cup with Rekindling, on that occasion thwarting his father who saddled the runner-up, Johannes Vermeer. 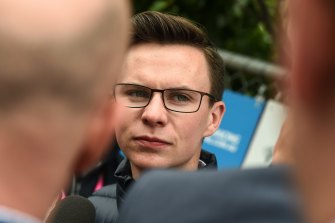 It is a remarkable record for one so young considering Aidan has been trying to land the Cup for more than a decade, sending out more than a dozen fancied contenders over the years in an effort to do so.

Interviewed on television from his Irish base, O'Brien paid tribute to Lloyd and Nick Williams, in whose colours both his Cup runners ran, and jockey Jye McNeil.

"It's very special to be able to compete in these bigger races, this year in particular. There was a time when we weren't sure whether we were going to be able to have runners.

"All credit and a huge thanks to all the people behind the scenes making that happen and making it possible.

"Jye gave the horse an incredible ride and all credit has to go to Lloyd and Nick Williams. They really thought this horse had a big chance in the race this year.

"Mark Power, Sean Corby and my team of lads that have been down in Melbourne for the last number of weeks have done an incredible job. Not only him but all the horses there and having them in fantastic condition. All credit has to go to them."

Beating his father was great but the rivalry ended when the race finished, O'Brien said.

"When the horses are around the track they're all doing their best and Dad is delighted for me to have a winner as I'm delighted for him when he wins a race," he said.

O'Brien's two Cup winners could not have been more different.

Rekindling was the first northern hemisphere three-year-old to land the great prize, a horse who had been bought as a youngster by Williams to be trained in Ireland. Twilight Payment is an eight-year-old gelding who had only been purchased in 2019 as a tried horse with the Melbourne Cup specifically in mind.

That versatility is a hallmark of the O'Brien racing dynasty. Aidan was a champion amateur jumps rider and O'Brien himself somehow managed to defy his 1.80-metre frame to ride as a top class jockey on the flat, winning races like the Epsom and Irish Derby for his father before the pressures of wasting to ride at 55 kilos became too much.

As trainers, both are adept with flat horses and jumpers although both now concentrate far more on the level.

O'Brien has established a very strong relationship with the Williams camp, who effectively now use him as their trainer for their major Melbourne Cup hopes now they have wound down their own Macedon training property and put it on the market.

The young man, whose politeness and calm manner hides a steely determination and a racing brain shrewd beyond his years, certainly has not let them down. As well as winning the race twice in the past four years for them, he also sent out Master of Reality, unplaced on Tuesday, to finish second past the post last season.

Concertista back with Fairyhouse win

Who is Kendall Hinton? Broncos may need to play rookie at QB vs. Saints