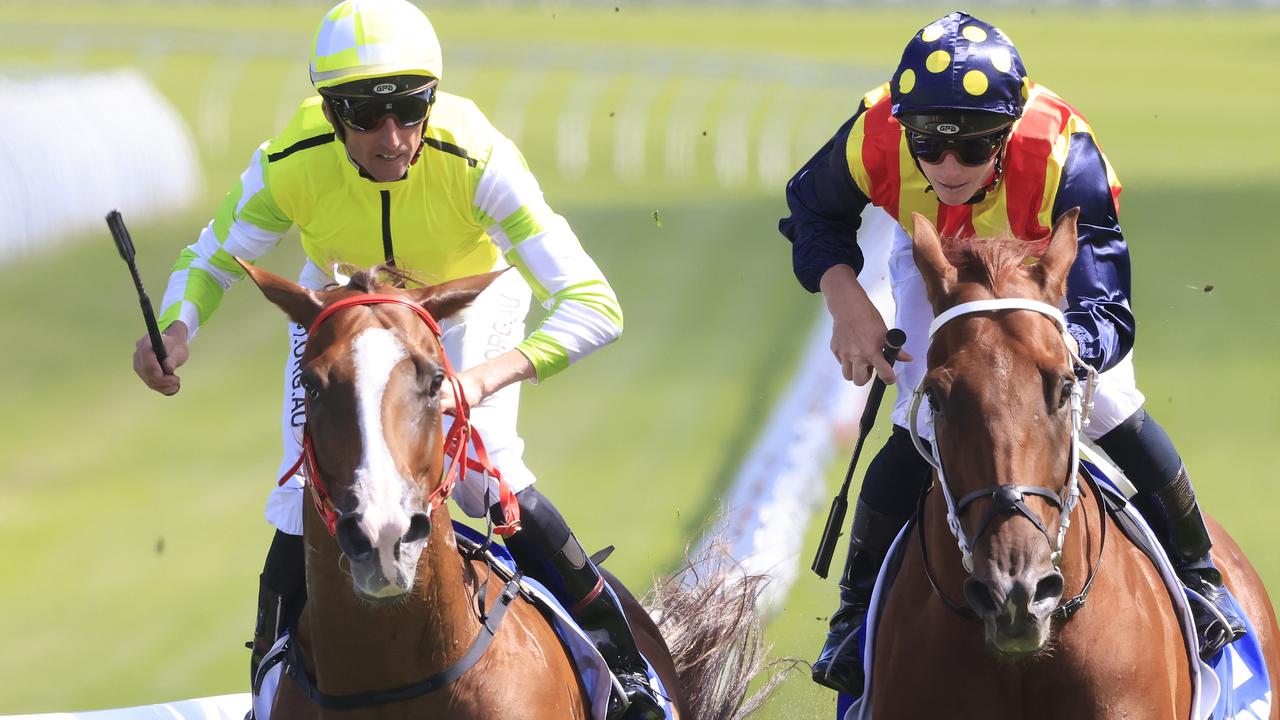 Eduardo smashed a course record then carried topweight and thrashed a Group 1 field of sprinters – but he’s capable of improving on those career-best efforts at Royal Randwick on Saturday.

Trainer Joe Pride sounded this ominous warning to Eduardo’s opposition when he declared his brilliant sprinter is ready to go to an even higher level in the Group 1 $2.5 million Heineken TJ Smith Stakes (1200m).

It’s difficult to comprehend how Eduardo can improve off his two stunning wins in the Group 2 Challenge Stakes (1000m) and Group 1 The Galaxy (1200m) this campaign but Pride is convinced there is “more in the tank”.

“I genuinely think although he was great in The Galaxy he still has another level of progression in him and that is what we want to see on Saturday,’’ Pride said.

“What he did in The Galaxy might be enough to win the TJ but I’d like think there is a length or two improvement and it looks as though he has that in him.’’

Eduardo shouldered topweight of 57kg and toyed with his rivals in The Galaxy, romping home more than three lengths clear of the chasing pack.

This breakthrough Group 1 success came after Eduardo and Nature Strip staged a memorable duel for the Challenge Stakes, Pride’s sprinter fighting back after being headed to win by a nose.

The true merit of Eduardo’s Challenge Stakes win – and Nature Strip’s effort for that matter – was revealed by the scarcely believable winning time of 55.2s, monstering the previous Randwick 1000m track record of dual The Everest winner Redzel by a staggering 0.53s, which equates to about three lengths.

Eduardo holds off Nature Strip after a thrilling battle in the Challenge Stakes at Randwick. Picture: Getty ImagesSource:Getty Images

The stage is set for a rematch between Eduardo and Nature Strip in the TJ Smith but this isn’t just a two-horse “drag race”.

Godolphin are confident Bivouac is back to his brilliant best, Masked Crusader is an exciting and emerging sprint talent, Libertini is capable of anything on her day and September Run is an outstanding filly.

Zoutori, Dirty Work, Order Of Command and Eleven Eleven are not just making up the numbers, either, they are top class sprinters in their own right.

The TJ Smith has attracted an outstanding sprint field with six individual Group 1 winners among the 10 starters and collectively they have earned more than $22 million prizemoney.

Chris Waller’s flying machine Nature Strip has bankrolled the most so far winning nearly $6.5 million and the gelding is the $3.50 favourite to win a second successive TJ Smith Stakes.

Despite the quality of opposition, Pride wouldn’t swap Eduardo for any other runner in the TJ Smith Stakes although the trainer did concede the feature sprint could prove to be the race of the day on an outstanding Doncaster-Derby Day program.

“I love horses that we know, horses we have seen race many times,’’ Pride said.

“The Derby and Doncaster are great races but the TJ Smith has so many headline horses.

“It will be a great race of tactics and horses coming together with different formlines.

“From my perspective it will be us (Eduardo) and Nature Strip up front. The rest will be behind us and hopefully they stay there.’’

Eduardo never looked like getting beaten in The Galaxy at Rosehill. Picture: Getty ImagesSource:Getty Images

With the scratching of Haut Brion Her, Nature Strip comes out of gate four and is expected to lead as Eduardo cruises across from barrier seven to settle outside the defending champ.

The brilliant duo won’t be able to break the track record on Saturday given the rain-affected conditions but both are very effective in soft-heavy conditions so this should be another enthralling speed duel.

Pride said Eduardo’s autumn campaign has been faultless so far and even the necessity to change riders after the suspension of Nash Rawiller doesn’t faze the trainer.

In fact, Pride is so relaxed about having secured Brenton Avdulla for Eduardo that he hasn’t even bother to asked the jockey make his way out to Warwick Farm to put the gelding through his paces at trackwork.

“No, that is a bit overrated for mine,’’ Pride said when asked if he was worried Avdulla hasn’t ridden Eduardo going into the TJ Smith Stakes.

“My theory is this horse is very consistent in his trackwork. I don’t want a gallop that doesn’t match his others so I like to keep him to his routine.

“What you see in a track gallop doesn’t simulate raceday, anyway. Brenton has done a few ‘dances’ during his career so he knows what to do.

“The horse is ready, his preparation has been really good so there will be no excuses.

“This autumn, it is all happening for the horse, he is in a great frame of mind and just racing right up to the very best of his ability.’’

Eduardo is likely to be spelled after Saturday’s race with Pride already thinking about another The Everest campaign.

Pride said Eduardo has some “unfinished business” in the world’s richest turf race after going too hard in front and running only 11th behind Classique Legend last spring.

There is a school of thought that Eduardo has already done enough to secure a slot in The Everest and that might be the case but a win in the TJ Smith would certainly seal the deal.

Haut Brion Her was withdrawn from the TJ Smith Stakes on veterinary advice on Thursday.

Originally published asEduardo up for another stoush with Nature Strip 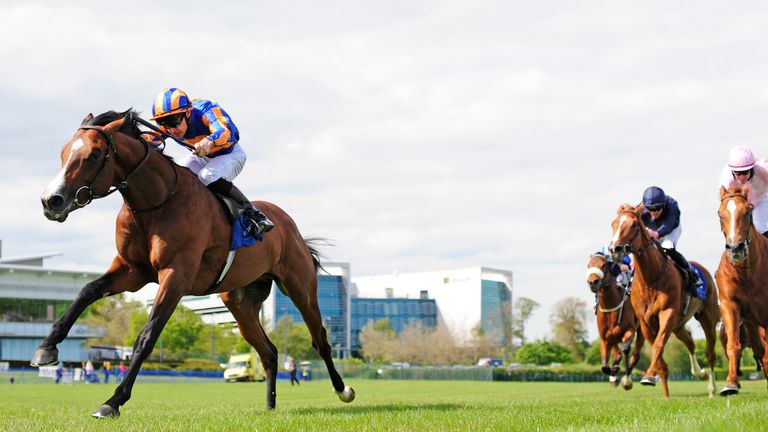 Broome battles to victory in Alleged Stakes at the Curragh 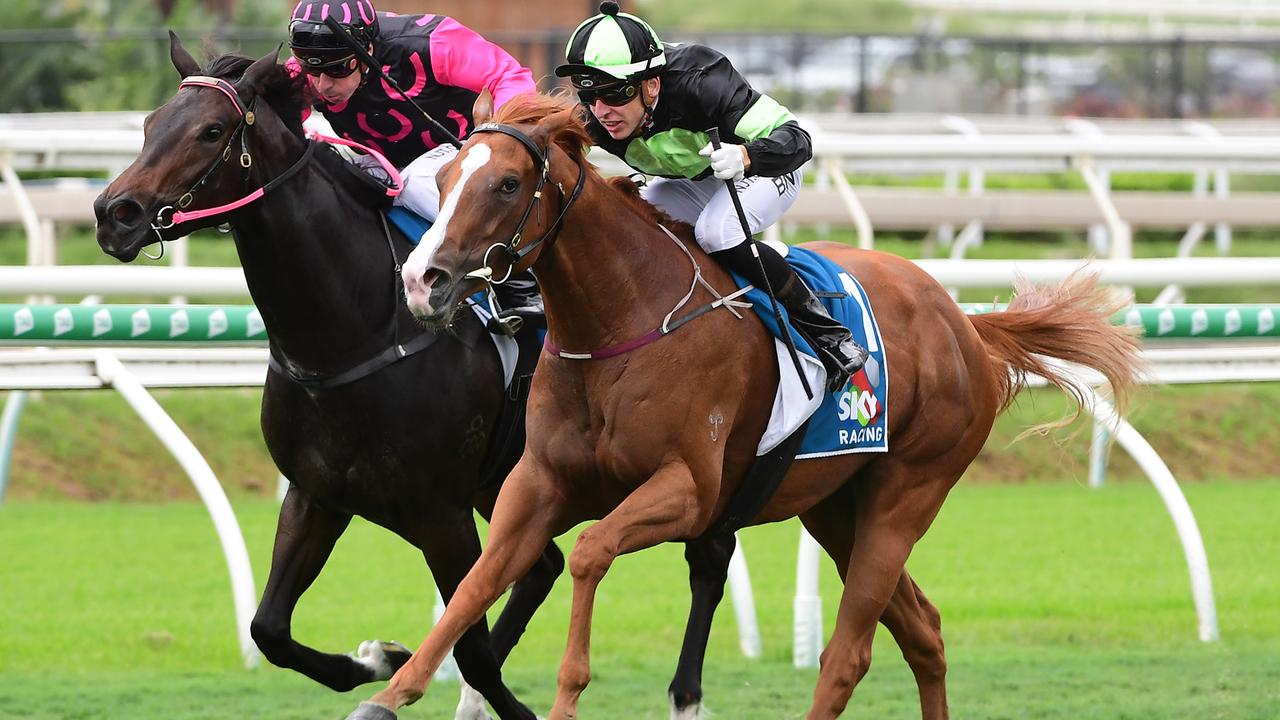