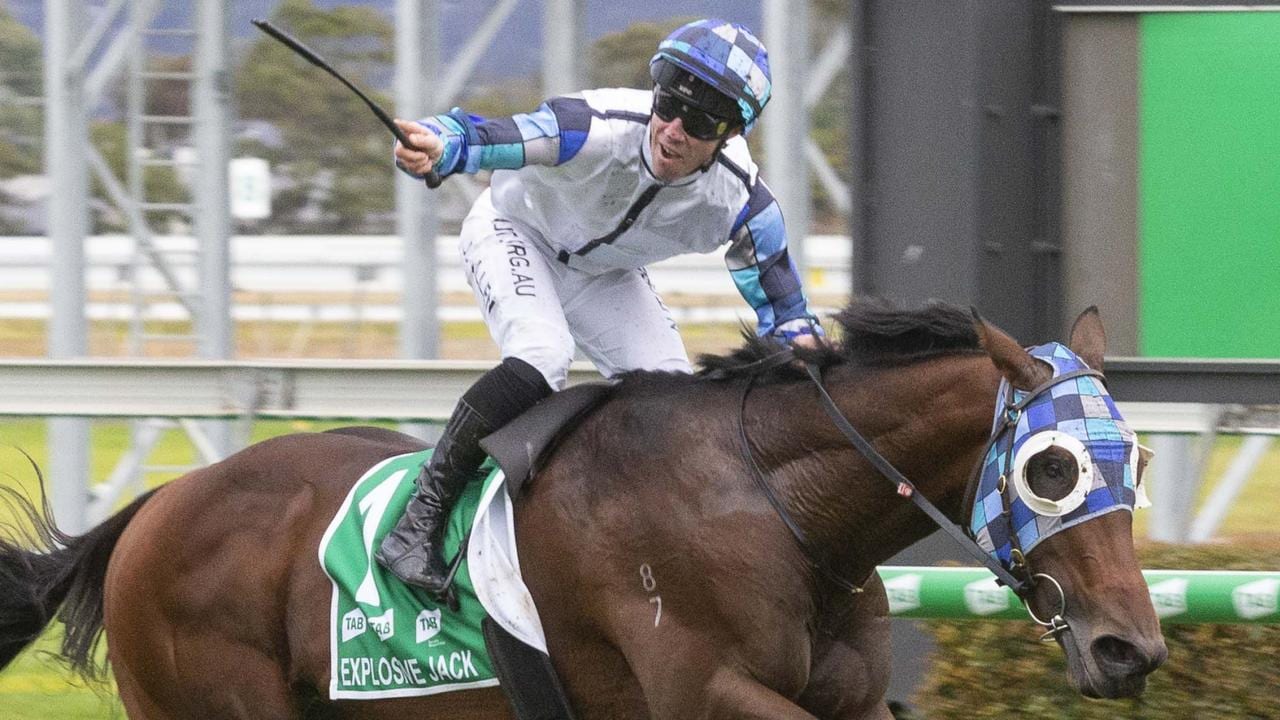 LAY OF THE WEEK: Yonkers (Caulfield R6 No.4)

A challenging end to the day at Caulfield where if you find the winner the value will take of itself.

She boasts a tremendous record at Caulfield having won three of her five starts at the track and is a must for the quaddie.

The runner who represents tremendous each-way value is The Inevitable.

The Tassie star did not have much luck in the spring but two recent barrier trials showed that he is back to his best.

He has an excellent fresh record with three first-up wins and should run a big race.

Muntaseera is another with leading claims having won the Redelva Stakes in Adelaide two starts ago.

I can see Muntaseera firming from her current $6 quote.

THE TIP: THE INEVITABLE each-way.

The Inevitable resumes on the back of some top jumpouts. Picture: Getty ImagesSource:Getty Images

Boom galloper Ayrton will race his way into the Group 1 Stradbroke Handicap with a win in Saturday’s Group 3 Fred Best Classic at Eagle Farm.

The Mick Price and Michael Kent Jr-trained galloper burst onto the scene last December winning his first two career starts by a combined nine lengths at Bendigo and Caulfield.

He resumed from a spell with an equally impressive Caulfield win and looks primed to continue his meteoric rise through the racing grades.

Ayrton was backed from $1.60 into $1.50 in pre-post markets for the Fred Best Classic and reopened at $1.55 following final field before easing out slightly to $1.60.

He should be too good from gate six and star hoop Jamie Kah in the saddle.

He must win to be guaranteed a start in the Stradbroke, where he is a clear favourite at $3.50.

Exoboom is on the second line of betting at $5 and should feature in the placings.

He has placed in all three runs back this campaign including a win in the Group 3 Hawkesbury Guineas two starts ago.

Apache Chase at $15 can run a cheeky race and will be worth including in the wider multiples.

Explosive Jack has been a darling to readers of this column as we have been with him in his three prior Derby victories and we are not jumping ship now.

The star stayer has already claimed the Tasmania Derby at $4, ATC Derby at as much as $26 and then last start defied a late betting drift to win the South Australian Derby at $4.

Senor Toba from the Chris Waller stable is on the second line of betting at $5.

He worked home strongly in the Rough Habit Plate to run third to $101 bolter Criminal Defence and should appreciate the step up in trip.

Senor Toba and Criminal Defence are two of eight runners to come through the Rough Habit.

Let’s Karaka Deel is stablemate to the favourite Explosive Jack and he has been runner-up in all three runs this campaign.

Horrifying is a talented galloper who is putting it together and looks over the odds at $15.

As always, an open edition of the Kingsford-Smith Cup with the early money coming for the James Cummings-trained Savatiano.

The classy mare has resumed in top order in 2021 winning the Group 2 Expressway Stakes and Group 1 Canterbury Stakes before running second behind Kolding in the All Aged Stakes.

She was posted a $5 chance following the barrier draw and has been backed into $4 to head the market at that quote.

There has also been support at longer odds for her stablemate Trekking, who has been backed from $9 into $8.

Trekking was disappointing first-up but was much better last start coming off a slow speed to work into fifth behind Eduardo in the Group 1 Doomben 10,000.

He looks set for a big run third-up and stepping up to 1300m.

Gytrash ran well as a beaten favourite in the Goodwood and has a good second-up record of two wins and three placings from five attempts and must be respected.

Savatoxl caused an upset winning The Goodwood and is again worth including in the multiples.