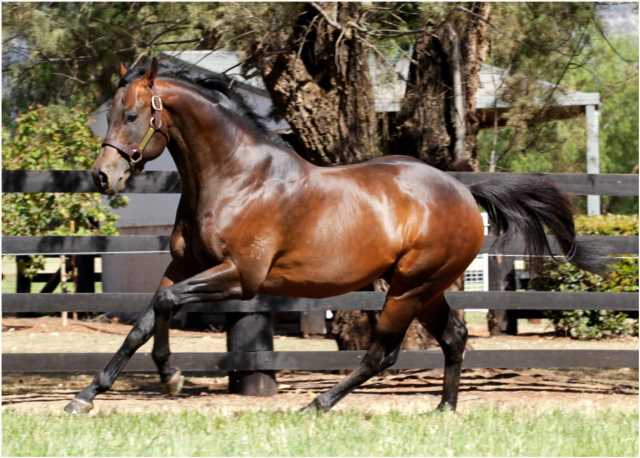 Yearlings by super stallion I Am Invincible were the stars of the show including one which set a record on the second day of the Inglis Australian Easter Yearling Sale on Wednesday.

Stock by the Yarraman Park resident charged out of the blocks with three million-dollar plus babies from the opening 13 lots of the second session of the sale.

Six seven-figure I Am Invincibles on Wednesday took the stallion’s haul to eight for the sale after producing two million-dollar offerings on Tuesday.

The filly will be trained by Mick Price and Michael Kent Jr.

“I don’t think I’m overstating it when I say that’s a collector’s item that you’ll get very few opportunities to buy.

“Same ownership group as Odeum and hopefully we can get the same result.”

WOW! TOP LOT OF DAY 2 – @CoolmoreAus I Am Invincible x Hips Don’t Lie filly (Lot 340), selling to @SMBloodstock for $1.95m and we can see why! Congrats to all involved in this huge result #InglisEasterpic.twitter.com/A6EMDiigZM

“We’re so lucky with the support of Hermitage and we picked out two beautiful I Am Invincible fillies,” Mulcaster said.

“We managed to get the one yesterday in partnership and we’ve got this one today.

“Catchy was such a great race mare and this filly is just such an athlete.

“She’s going to go with the other one and Chris (Waller) has got the pair of them.”

The I Am Invincible filly landed by Hermitage, in partnership with Coolmore on Tuesday, was a daughter of Vezalay and cost $1.25 million.

Coolmore were also back in action on Wednesday paying $1.4 million for an I Am Invincible colt out of former top race mare, the multiple Group 1 winner Cosmic Endeavour.

“I Am Invincible doesn’t need any introduction to what he’s doing at the moment,” Tom Magnier said.

“We’ve had Home Affairs and we’ve got a couple of good horses that we bought last year that are with Chris (Waller) that are showing a lot of promise and so it gives you the confidence to come back and buy this.

“This is a lovely type. Chris Waller and Guy (Mulcaster) and James Bester, the whole team really liked this horse so it gave us the confidence to go ahead and buy it.”

Strong competition sees this colt become the top lot of the morning so far! He is an I Am Invincible x Cosmic Endeavour colt (Lot 253) from @kiaorastud, selling for $1.4m to @CoolmoreAus. Congrats to all involved #InglisEasterpic.twitter.com/yv5H5BsDbC

The other million-dollar I Am Invincible yearling is out of the Elusive Quality mare Caveat and was purchased by agent Andy Williams for bang on $1 million.

“We put this horse in that top bracket, one of the best colts of the sale,” Williams said. “He’s just a lovely athletic horse that walks so well.”

Williams said no trainer has been chosen yet for the colt.

A bit later in the day Rosemont principal Anthony Mithen said he couldn’t resist when the I Am Invincible, Heart Of Thrills filly walked into the ring.

It took his final bid of $1.2 million to secure the brown filly.

“It’s a family that’s been close to our hearts for a while with Thrillster doing really good things,” Mithen said.

Warwick Farm trainer Bryce Heys struck two significant blows late on Wednesday – paying $1.4 million for the I Am Invincible, Miles Of Krishan filly, just six lots after he paid $1 million for a So You Think colt from Encosta De Lago mare, Martilago.

Meanwhile, former champion Victorian trainer Peter Moody was the last man standing when securing the Zoustar and Fireworks colt for $1.15 million before Matt Laurie paid $1.25 million for another Zoustar colt, out of Lady Jivago.