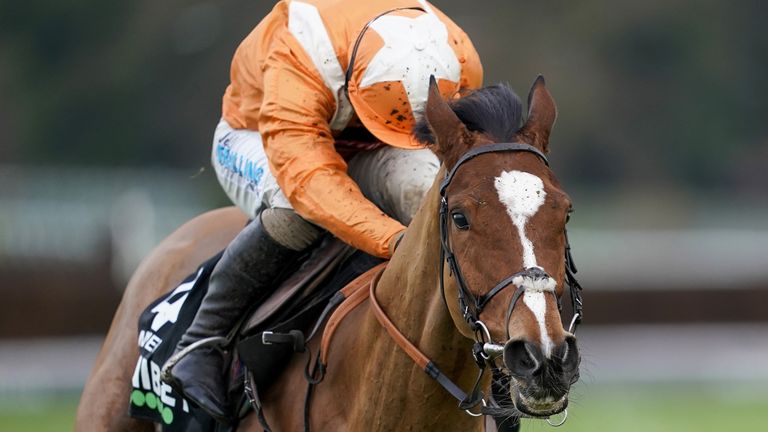 Metier maintained his unbeaten record over obstacles with a facile victory in the Unibet Tolworth Novices’ Hurdle at Sandown.

A useful performer on the Flat in Ireland for Andrew Slattery, the Mastercraftsman gelding subsequently changed hands for 150,000 guineas to pursue a jumping career with Harry Fry.

He made a fine start for his new connections when impressing on his hurdling bow at Newton Abbot in October – and having since doubled his tally with a dominant front-running display at Ascot, Metier was the 7-4 favourite to complete his hat-trick in this Grade One feature.

Always travelling well in the hands of Sean Bowen, the five-year-old loomed up to challenge long-time leader Shakem Up’Arry early in the home straight.

The latter did his best to make a race of it, but Metier had far too many guns and powered clear in the testing conditions to score emphatically by 12 lengths.

Paddy Power reacted by cutting the winner to 10-1 from 25-1 for the Supreme Novices’ Hurdle at Cheltenham in March.

Fry said: “He comes alive on the racecourse. It was ideal we didn’t have to make our own running today, as they went a good tempo. Sean said he just jumped for fun.

“Turning into the bottom, he had a double handful. Very rarely do races go quite so smoothly, and certainly not at this level, but I’m absolutely delighted for Gary Stevens. We bought him over a year ago now and he had to wait over 12 months to see him first run. I’m delighted that patience is being rewarded.

“He relishes those conditions. He is a very exciting hurdler. With the action on him, I wouldn’t be in too much of a hurry to run him on drying ground, but good horses have to run on all grounds.

“This is a lovely race to win and I’m absolutely delighted to get a first Grade One winner from the new yard, having only moved in back in June.

“A lot of people have helped us to get where we are. To get the new yard up and running, moved in and set up, is a lot of hard work from the team – not least for my wife Ciara, who not only is assistant trainer but is married to me, so it is a double-edged sword. It is great for all the team.

“I think you’ve got to consider that (Supreme). We will enjoy this moment then work out whether we go straight there (Cheltenham) or look at something in between.

“The Betfair (Hurdle) entries close this week, for which you have to have a third run by next weekend anyway, but he has probably gone about it the wrong way. He will certainly have an entry. It will be an interesting conversation with the handicapper.”