Champion jockey Kerrin McEvoy and his family are on the Melbourne Cup diet of fish from Streaky Bay as he attempts to break his hoodoo in the Doncaster Mile on Unforgotten at Randwick on Saturday.

McEvoy will ride the four-year-old mare at 51.5kg and his secret weapon for the week is fish shipped daily from his South Australian home town by Renae and Dion Edmunds’ Streaky Bay Seafood. 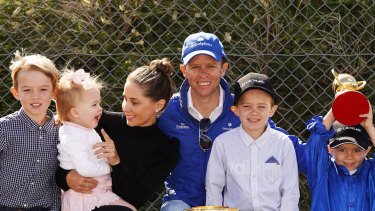 “My sister and her husband run the fish co-op at Streaky Bay and they cryovac it and it get over to me in a day. It is the go-to diet when I’m riding light,” McEvoy said. “It is just steamed fish for me [for the week] to get the weight down before you sweat the last bit out. Having it from home makes a bit of difference.”

McEvoy, who was know as the Streaky Bay kid when he won the first of his three Melbourne Cup on Brew in 2000, is naturally a lightweight but for the right ride, he strips right down.

And it was a diet of Streaky Bay fish that helped him get down to the weight to win the Melbourne Cup on Cross Counter last year.

It is the main part of his preparation for the first day of The Championships, when he also links with dual Everest winner Redzel in the TJ Smith, Global Exchange in the Australian Derby, another race that has so far eluded him, and Tenley for Godolphin in the Sires Produce Stakes.

The hardest work will be to make the weight for the Doncaster but it is an enjoyable challenge for McEvoy, with his boys Charlie, Jake, and Rhys taking part in the week of preparation.

“It is all fresh-caught fish, so it can be King George whiting, snapper, and a bit of flake and then calamari for the kids. It arrives frozen but very fresh,” McEvoy said. “The boys get into it as well – Eva is bit young for it at the moment – so it becomes a family thing.

“I did it a couple of weeks ago when I rode 52 kilos and before that it was the spring and Melbourne Cup, which is a good memory.”

Unforgotten got gate 18 at Tuesday’s barrier draw, which sees her rated an $11 chance with Beteasy, while Alizee, which will jump from gate 12, is the $6 top pick in a wide open Doncaster, with a capacity field of 20 and four emergencies.

McEvoy is confident Unforgotten is peaking after he rode her in a final gallop at Rosehill on Tuesday. This preparation she has taken on Winx twice, run third in the Chipping Norton Stakes, before struggling in the soft ground when fourth to Avilius in the Ranvet Stakes.

“She has come out of her last run feeling really well,” McEvoy said. “I take a lot of confidence that I rode her in the Epsom with 52½ kilos in the spring, and she should have won that race, now she has only has 51½ in the Doncaster.”

McEvoy is also happy with Redzel after he had an unusually flat run in the Galaxy. He has drawn barrier five and should be able to control the TJ Smith, which has drawn a star-studded group of sprinters, headed by Trapeze Artist, Osborne Bulls and Sunlight.

Ciaron and David Eustace have booked McEvoy to ride Global Exchange, an $8.50 hope for the Australian Derby despite an unbeaten autumn preparation in Melbourne, which included winning the Alister Clark Stakes last start.

McEvoy got a feel for the colt in barrier trial last Friday and was impressed.

“He is a big strong individual and has a nice attitude,” he said. “He feels like he will enjoy 2400m and is definitely bred to run it, being by Dundeel.

“I presume Ciaron [Maher] has always had lofty ambitions with him and he has got into the Australian Derby at his fourth run back after three wins.”

McEvoy’s first group 1 ride for the afternoon is Tenley, which had won her first three starts before she failed on the wet track in the Golden Slipper. He has always believed she would be more comfortable at 1400m.

“I was next to her all the way in the Slipper and she didn’t like that track,” McEvoy said. “The way she relaxes and settles I thought that seven [furlongs, 1400m] would be her best trip and I think on a firm track she can be closer and use her turn of foot.”