Racing's modern-day version of Bonecrusher v Our Waverley Star proved the highlight at Flemington on Saturday as Alligator Blood held off new rival Catalyst in a captivating battle in the CS Hayes Stakes.

The three-year-olds raced side-by-side over the entire 1400-metre trip after jockey James McDonald worked Catalyst out of the gates to take a forward position on the gelding. 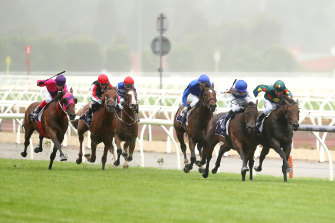 Alligator Blood's trainer David Vandyke said he thought the New Zealander was going to run over the top of his horse, but the son of All Too Hard stretched his neck over the last 50 metres to prevail by a very narrow margin.

"That'll go down in history, that race will," Vandyke said.

"The little Queenslander gets off the canvas and comes back and does it. That was amazing, Australia and New Zealand.

"I think he needed to be in his best shape to win that. I thought the other one had us. He was sort of softened a bit by Catalyst early.

"We've never seen him go head-and-head against another horse. He usually gets there pretty quick and he's dominant and the day Super Seth beat him [in the Caulfield Guineas] he was really switching off a bit.

"Full credit to the second horse, but my horse, wow. He is something really special."

It was the first of what's likely to be three clashes between the two stars this autumn, with both expected to progress towards the Australian Guineas in two weeks' time before a tilt at the All-Star Mile.

Catalyst, who carried a kilogram more than Alligator Blood on Saturday, will meet his counterpart better at the weights next time. 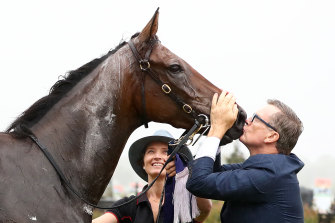 "I don't think he'll eat up tonight after that," Vandyke said of Alligator Blood.

"I was looking at the sectionals and I saw they were going along and I thought, gee he's going to have to be good to win this.

"They were two top-class horses. The time they ran for the last 400 was incredible and they were going stride for stride."

Alligator Blood's jockey Ryan Maloney was delighted with the way his mount tenaciously answered his every urge, declaring it the most exciting race he had ever ridden in.

"Most of his wins he hasn't over exerted himself. I went 100 metres and I said to James [McDonald], 'We have got ourselves a match race.'

"We had it easy in front and he put it to me early. My bloke just wanted it. It was as simple as that. He was headed multiple times and he just kept coming back, it was really tenacious.

"It was a real ding-dong. I have not been in a race at this grade with two horses who wanted to win as much as each other."

Catalyst's trainer Clayton Chipperfield believes that the extra distance of the Australian Guineas and the All-Star Mile will suit his horse down to the ground.

"I am very happy with that. He bounced out and put himself there and we took a lot of bad luck out of the equation by having him handy. That was a good dog fight, bring on a mile," he said.

"We gave the winner a kilo and got beaten a nose. 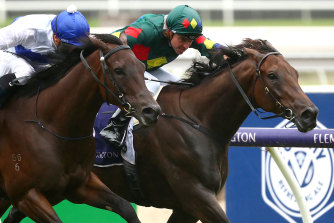 "The weight was the advantage for the other boy, but we can't be disappointed. This wasn't a must win race, but we needed to know if he was competitive and he's certainly answered that question.

"The 1600 metres of the Guineas will suit, his best sectionals have been over a mile. He will relish a mile. There were no excuses today. We have got two weeks to the main race. The Guineas is the one we want, if he pulls up 100 per cent after the Guineas we will push on to the All-Star Mile.

Anthony Freedman was equally impressed with the effort of the third-placed Godolphin-owned Chenier, making a belated seasonal reappearance

"We were really happy, first up for nearly a year. He's run great and showed he's close to the mark," Freedman said.

He too is now likely to press onto the Guineas.