Thousand Guineas winner Flit is finally ready to show her real talent in the autumn according to trainer James Cummings after she took out the Light Fingers Stakes at Randwick on Saturday.

With the addition of the blinkers for the first time, Hugh Bowman was able to get Flit ($11) settled closer  behind the speed set by stablemate Kiamichi ($12), and she sprinted away to lead home a Godolphin trifecta of group 1 winners, with  Lyre ($5.50) getting home late to split the pair. 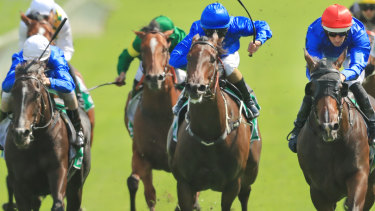 It was another 1-2-3 finish for Godolphin's golden generation, which  delivered three group 1s as two-year-olds and another two as three-year-olds – and there could be more to come.

Cummings and Bowman  added the other feature from the afternoon when Alizee drove through to beat Dreamforce in the Apollo Stakes.

However, Cummings is excited about what is in front of Flit and believes that,  although she is already a group 1 winner, she is ready to go to another level.

“The penny is dropping with her, and there is a lot of promise for her this autumn,” Cummings said.

“Hugh and I have been talking about the  blinkers  for a while. I think we did the right thing and leaving them off [in the spring] and she won the group 1.

“She couldn’t afford to lose her focus for 50 metres [today] when the pressure went on. With them on, she was able to apply herself and show the promise she has shown over the past 12 months.

“It is great to see her starting to deliver, and I dare say she is going to be filly to beat in two weeks time [in the group 1 Surround Stakes].”

While Cummings was talking glowingly about the future, his father Anthony was left scratching his head as the odds-on favourite Libertini ($1.85) could only manage fourth.

“She didn’t race as well within herself as I expected,” Cummings said. “I thought she would be more prominent in the race, and she wasn’t.

“It is the first time she has disappointed me, and we just have to get her home and have a good look at her.”

“She jumped quick and that was about it. I had to ask her to be there, and she wasn’t travelling that well,” Berry said. “She has towed me into the race every time, but she didn’t feel the same horse today. I don’t know why.”

Bowman, by contrast, was delighted with Flit and how she had developed in the break.

"She felt great, but she always has. I think the blinkers have really helped, especially over these distances. It really switched her on,” he said.

“Even in the Thousand Guineas, when she went from travelling to through her gears, she just didn't do that well without the headgear.

"I didn't think she was all that comfortable on the soft ground in the trial, so to just switch on and perform like that in that ground, it is so encouraging, and her work through the line was just as good.

“It didn't surprise me. Our main goal was to let her settle and get her into a good rhythm.”

Flit look a more furnished product and Cummings admitted she had filled into her frame.

“She has put on weight, but if I told you I would have to kill you,” he said.

“She is tougher and she is really developing.

“She was backward, backward all the time, and had had enough racing. She went a little deeper into the campaign to Flemington [after winning the Thousand Guineas] and she is more seasoned now.

“It is great to see that toughness coming through. She has beaten a very respectable field there with the Blue Diamond winner and Golden Slipper winner and the favourite.

Will the Mozzie bite at Caulfield on Saturday?

‘The W is all that matters’: Cubs manager David Ross is already in playoff mode