Top jockey Luke Currie is hoping to recapture the career-best form he was in prior to his fall at Moonee Valley in February, which left him with rib and lower neck fractures.

Currie shook the monkey off the back at Flemington on Saturday with his first win since returning to the saddle, on Pretty Brazen in the group 2 Let's Elope. 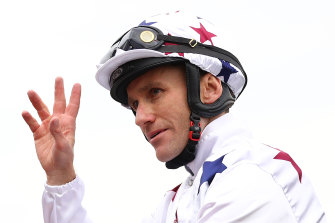 She's one of a number of horses Currie is excited about partnering with this spring as he looks to resume where he left off.

"It was definitely a good feeling," Currie said of Saturday's win.

"I felt like I had been riding well. I had a lot of placings and hadn't made too many mistakes in the first couple of weeks back and obviously riding straight back in the city this time of the year, it's competitive whether you've been riding right through or coming back from holidays. I wasn't too concerned but I was looking forward to getting my first [win] back."

The timing couldn't have been worse for Currie, who suffered the fall on the eve of the $1.5 million Blue Diamond where he was due to ride favourite Hanseatic.

But Currie has set himself for this spring and believes he's never been as fit as he is now.

"The time off, I've tried to make it as positive as I could," he said.

"I've trained really hard and got myself really fit and fit away from the track, not just ride fitness. I feel I'm fitter than ever and with that good break I'm as keen as I ever have been. 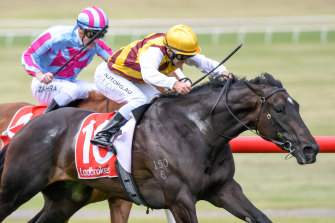 Luke Currie reunited with Pretty Brazen on Saturday to get his first win since returning from a fall.Credit:Getty Images

"I'm lucky enough I'm set up pretty well at home with a gym and a sauna, but the one thing I couldn't do [due to COVID-19] was get in the swimming pool, which I do a lot usually. But it hasn't affected me too much.

"Over the past few years I've really been going well, the last couple of years I've been flying so it was good to almost pick up where I left off."

Hanseatic is another horse Currie is keen to reunite with in the spring, although 52kg in the Moir Stakes will be below his weight grade. Instead, he's likely to partner warhorse Hey Doc in the Moonee Valley sprint, while Currie is also excited about jumping on the back of 2019 Blue Diamond winner Lyre and Caulfield Cup aspirant Game Keeper.

"Game Keeper, I think he'll be a bit of a chance to run in the Naturalism and that'll put him in contention for the Caulfield Cup I suppose," Currie said.

"I'm really looking forward to him. He probably has to go to the next level but the way he's going he's on the right track.

"I'm booked to ride [Lyre] next week, I think in the How Now. She ran super first up; the inside draw at Caulfield is probably not really her go, she'll need a bit more room than what she got earlier but she was really good.

"[And Hey Doc] jumped out last week on Friday and he jumped out quite well but he did have a big blow. There'll be plenty of improvement in him, he's a big horse and he'll only improve on what he does first up [in the Moir]."

Temperature rules Anders out of the Moir Stakes