It's unusual to see two group 1 winners turning out for a Country Cup, but then Saturday's Ballarat Cup is no ordinary country contest.

Saturday's feature officially brings down the curtain on the spring carnival.

And with $500,000 in stakes money it is hardly surprising that top line gallopers like former group 1 winners Harlem and Kings Will Dream are among the entry. 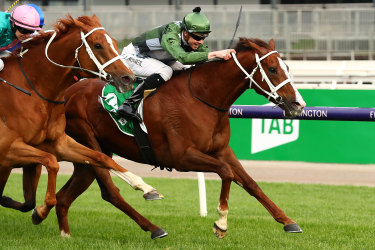 A measure of how strong the field is this year is that neither of that pair – dual Australian Cup winner Harlem – from the Tom Dabernig/David Hayes stable – and the Chris Waller-trained Kings Will Dream, who landed the Turnbull Stakes one year ago – are even top weight.

That distinction goes to the enigmatic So Si Bon, a stable mate of Harlem, whose best wins have come at group 3 level.

He shoulders 62 kilos and has to give half a kilo to Harlem and Kings Will Dream.

But he showed he was in fine fettle as recently as last Saturday, when he prevailed in a blanket finish to the group 3 Eclipse Stakes at Sandown, seeing off stablemate Power Scheme by the minimum margin.

Mark Zahra was in the saddle at Sandown but this time he jumps off the gelding and climbs aboard the improving locally-trained mare Affair to Remember from the Dan O'Sullivan yard.

She often leaves herself with plenty to do in her races because of her get back racing style, but she arrived just in time last start to win the group 2 Matriarch Stakes at Flemington on the final day of the Cup week carnival.

Kiwia, trained at the track by expatriate Englishman Archie Alexander, is aiming to make history on home ground when he looks to win his third Ballarat Cup on the spin.

Last year he carried 56.5kg and was a $16 chance when he and big race rider John Allen nosed out Double You Tee. The year before he was rather more fancied, he and Allen starting at $8.50 before landing the spoils by almost two lengths from Pilote D'Essai and Life Less Ordinary, on that occasion shouldering 57.5kg.

They are the only two races he has won in the past couple of years, but trainer Archie Alexander is optimistic that the now seven year old can put his best foot forward despite having to carry 59.5kg this time. Irishman Allen will once again be his partner.

''Country Cups in Australia are so important. Everyone follows the Cup and they follow a horse like Kiwia,'' he says.

''He's a tricky horse to get right, and as he gets older, like any athlete, he's not easy to train.''

But this is Kiwia's day in the sun, and it wouldn't be the greatest shock to see him make history on his home turf on Saturday – whatever price he starts at.

Protest: The ‘intimidation’ case doesn’t work this time for Coolmore