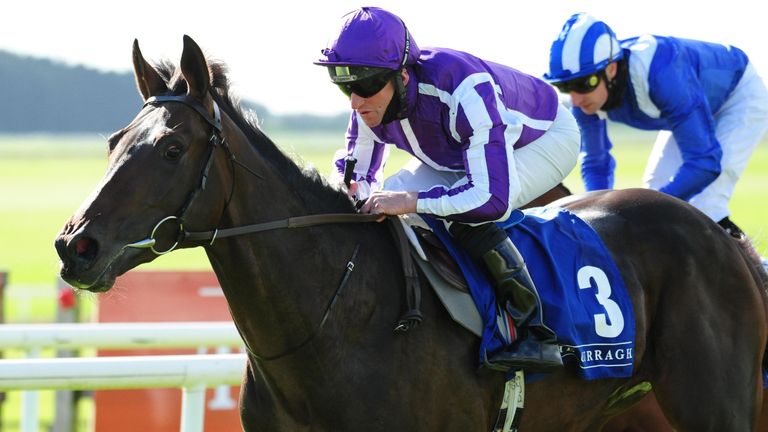 High Definition is set to sidestep the Cazoo Derby at Epsom on Saturday and instead run in the Irish equivalent at the Curragh on June 26.

The Galileo colt spent the winter months as ante-post favourite for the premier Classic after coming from the clouds to win the Beresford Stakes in September.

However, his preparation this spring has not been entirely straightforward, with unsatisfactory blood test results ruling him out of his intended comeback run in the Lingfield Derby Trial.

Instead, High Definition returned five days later in the Dante Stakes at York – and while he was not disgraced in finishing third on the Knavesmire, O’Brien has revealed he is set to be saved for the Dubai Duty Free Irish Derby later in the month.

The Ballydoyle handler still houses the hot favourite for this weekend’s feature in Bolshoi Ballet.

Speaking after saddling Point Lonsdale to win the opening race at the Curragh on Wednesday, O’Brien said: “It looks like Bolshoi Ballet will run at Epsom and High Definition will wait for the Curragh.”

He went on: “Nothing is written in stone until ten o’clock in the morning (final declarations), but it looks like the two horses are going to be split.

“It looks like Bolshoi Ballet is going to Epsom and it looks like High Definition is coming straight here (Curragh). Bolshoi would be our only runner at Epsom – that’s what the lads are thinking to give the two of them a chance at a Derby.

“St Mark’s Basilica and Van Gogh are going to France (Prix du Jockey Club, on Sunday). Kyprios is going to Ascot for the Queen’s Vase and Sir Lamorak might go for the King Edward.

“We were lucky to get the run into High Definition at York and we think he’s a very good horse. A little more time won’t do him any harm.

“It was just to give the two of them a chance until they have to meet. The Curragh Derby is a very important race, as the Epsom Derby is also.

“I’m very happy with both horses. If we didn’t get the run into High Definition then there was no decision to make as if he didn’t run in York then he definitely wouldn’t go to Epsom.”