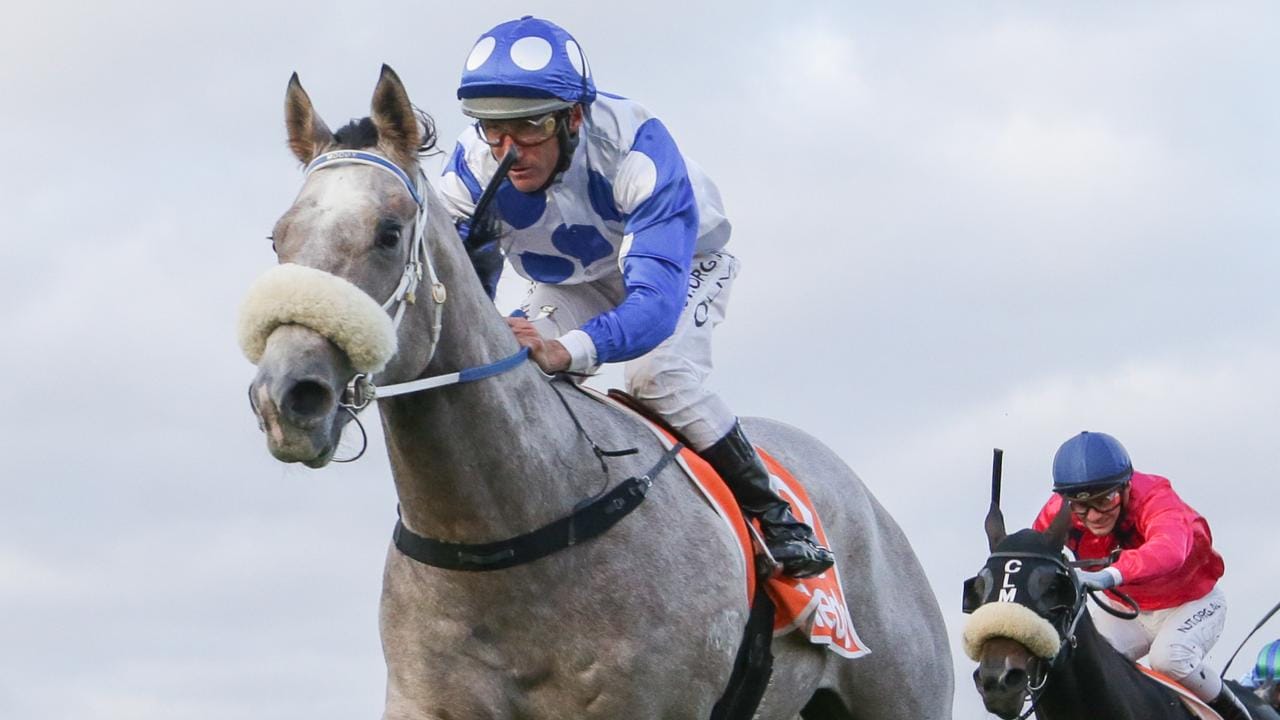 Moody and Nolen have combined for more than 800 wins in a wonderful partnership but the jockey suffered a blow on Friday night.

“Shout out to my little mate Trumby (Luke) Nolen and his brother Shaun, they lost their mum last night,” Moody said.

“The boys will be up there in Benalla probably having a cold one at this time of night. Thinking of you boys.

“Trumby rode this bloke and did a lot of work on him. Wish you were here, mate.”

Nolen did most of the work educating Riot And Rose and piloted the grey to a win on the Pakenham Synthetic track at his previous run.

But Oliver had to produce a few tricks to get Riot And Rose to produce his best in the straight before the three-year-old scored by more than two lengths. Rathlin ($14) and Zoutellus ($41) filled the minor placings.

“He was on and off the bit at different times but he joined in nicely and then when he got to the front he pricked the ears and had a bit of a wait.

“I think Moods and ‘Trumby’ are going to have a nice horse on their hands there.”

Moody has several options with Riot And Rose but said he’d consult managing owner Wylie Dalziel before deciding his next move with the promising son of Pins.

“On that race he’s still very new to it – he’s got no idea what he’s doing yet and still being able to win so that is very encouraging,” Moody said.

“That’s his first racing preparation so we’ll take a look at how he pulls up.”

An economical ride from Thornton, allowing the favourite to settle midfield in the run and slide up to the leaders approaching the bend, was the difference in the $135,000 Open Handicap.

Albeit short of breath, Thornton praised the five-year-old gelding’s willingness to find the line.

“We wanted to be right behind the speed and stalk them and make our run from there.

“We were a pair further back than we planned but I was quite comfortable where we were.

“He switched off and travelled lovely for me and just kept building around the turn.”

Another Dollar, the well-supported second favourite, appeared to get every chance but failed to quicken after being unable to find a clear path in the straight.

But Yonkers has been a model of consistency the past three starts especially with Thornton aboard, banking two Caulfield wins and second in the Listed Wagga Cup.

“He’s a dude to ride although he takes a little bit of effort from the 600 (metre mark),” Thornton said.

“It worked out (today) very similar to the Wagga Cup … he was in the same spot but there was probably a touch more give in the track today.

“It was quite firm at Wagga and just didn’t seem to be able to let go quite as well.

“He was good today but I think where he’s best effective is on ground where there is soft give in it.”

“It looked early on that he had to make the decision whether he was going to come back or try and push up a little bit more but I think he made the right choice to slide back a touch,” Taylor said.

“He really got the soft run in and we had a nice good pull into the race.

“Produced him at the right time and helped him through his gears.

“He certainly knew where the line was.”