A yearling filly by Dundeel received great reports from her vendor and buyers after she topped the 2019 Magic Millions Adelaide Yearling Sale on Tuesday with a final bid of $250,000.

Tony McEvoy won a spirited bidding duel and immediately after the sale bloodstock agent Suman Hedge – the original buyer of super horse Zoustar, who was the under-bidder on the Dundeel yearling – bought in.

David Johnson, whose Rushton Park Stud offered the filly for sale, reported: ‘‘She’s a star and hasn’t turned a hair all week. She just cops everything in her stride and was easy to deal with. She’s a real professional.’’ 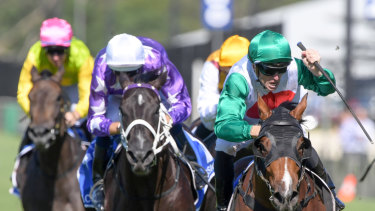 Raising the bar: Dundeel youngster Castelvecchio swoops down the outside in the Inglis Millennium. Credit:AAP

Rick Connolly, the bloodstock manager for McEvoy Mitchell Racing, gave a glowing report about the filly claiming her as not only a stand-out at the Adelaide sale but of the yearling sale season: ‘‘As long as I’ve been working for Tony we haven’t bought a better filly than her. She’s a very nice filly, fluid in her action and has a lot of class.’’

Hedge was an unabashed fan of the Dundeel filly as well but declared the McEvoy camp was too strong. He made McEvoy an offer to buy a part of the filly as his clients were keen to race her and a deal was done immediately.

Dundeel is becoming an exceptional stallion for Arrowfield Stud with a spate of black-type winners in 2019. He looks to be a special sire of staying youngsters and his $2million Inglis Millennium winner Castelvecchio looks to have a great chance in the coming ATC Sires’ Produce and Champagne Stakes. The Adelaide sale provided 19 yearlings which sold at six-figure sums and there was a great atmosphere at the sales complex.

A pleasing aspect was the response from local trainers and agents who purchased 83 of the 250 yearlings sold.

The Yu Long group was the biggest spender in Adelaide with owner Yuesheng Zhang outlaying $515,000 for four yearlings by a number of the popular sires – Not A Single Doubt, Written Tycoon, No Nay Never and Akeed Mofeed.

The local training partnership of Leon Macdonald and Andrew Gluyas spent $500,000 on five yearlings including the first yearling sold in Australia by Mongolian Khan for $110,000.

McEvoy’s outlay was also substantial with the trainer buying five lots for $597,000 (average $119,400). and Lloyd Kennewell continued his spending spree with another five yearlings for $258,000.

A number of stallions had excellent results in Adelaide including:

❏ Akeed Mofeed, who had 14 yearlings sell at an average of $61,786. He had a great Melbourne Premier Sale and a colt on day two topped the afternoon when selling to Gary Moore for $200,000.

❏ Shamus Award also had a strong sale with four of his progeny averaging $88,250, with his progeny showing great recent form.

❏ Brazen Beau, who had a huge sellers at the Premier Sale, had one yearling who proved popular with Lloyd Kennewell outlaying $190,000 for a colt from Natural Swinger early on day one.

A striking grey colt by Tapit, one of the major stallion forces standing in Kentucky, fetched a $US2 million ($2.83 million) record price at the opening session of the OBS Sale in Florida on Tuesday.

Tapit, who commands a $US250,000 service fee, had the record breaker as Lot 33 from the multiple group1-winning broodmare Artemis Agrotera.

Tapit has had a number of his progeny sell at Australia’s major sales and is represented by a lone colt at next month’s Inglis Easter Sales at the Riverside Stables complex at Warwick Farm.

He is being sold by Newgate Farm as Lot 44 and his dam is Heart Stealer, a five-time winner in the US.

The Phoenix Thoroughbreds group was active at the OBS Sale on day one buying three yearlings, the most expensive being $US825,000 for a Bernardini colt who will enter the stables of top trainer Steve Asmussen.

Widden Stud’s Zoustar, who is covering a full book of European mares at Tweenhills Farm in England, surpassed the $5 million prizemoney tally after a fantastic weekend of racing including Sunlight’s sizzling Newmarket win.

Zoustar was the leading first-season sire in 2017-18 and is now attempting to become the leading second-season stallion. The record holder for the latter award is Pierro who last season amassed earnings of more than $8.5 million.

Racing in Singapore at Kranji last Friday and Sunday had Zoustar as the sire of three winners, the first on Friday when the Lee Freedman-trained, Michael Rodd-ridden King Zoustar won. On Sunday Zoustar’s double was Vittoria Perfetta and Top Knight with Michael Clements training both and Vlad Duric riding the pair.

It was a satisfying moment when Yes Yes Yes, Bloodline’s early selection to win the Golden Slipper, scored a fabulous win last Saturday in the Todman Slipper Trial. Yes, I really believe he’ll crack the big double next Saturday.