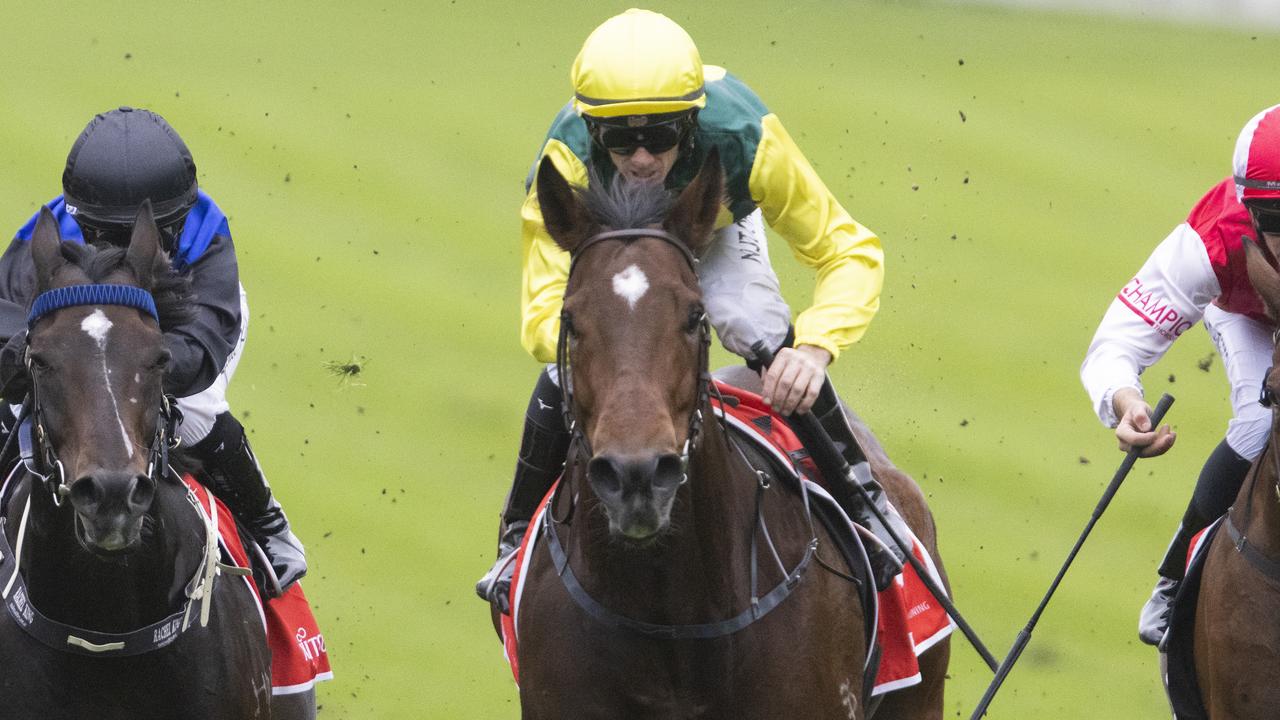 Punters saw what Brad Widdup’s seen in Adelong all preparation as she took out the At Sea Handicap at Randwick in an upset, but dominant performance.

She beat Wandabaa by only three-quarters of a length but had the race won by the 200m when she swooped past the $2.35 favourite Marway.

Widdup said Jay Ford’s position of her in the run was the key to her winning her seventh race at start 16.

“It was a great ride. He tracked up on Mark Newnham’s horse (Marway) and it all fell into place,” Widdup said.

“I’ve been happy with her all preparation but a lot of things haven’t gone right with her. Jay’s had a couple of rides on her now and he got it right today.

“She kept coming at them. In a couple of her earlier runs this time in she got into the wrong spot but she got outside the leader today and that’s what she likes. It all went to plan.”

Adelong takes out the first leg of the quaddie for @BWiddupRacing

Down in the weights she was too strong late 👌 pic.twitter.com/hqmltmqWDo

“I wouldn’t mind a few more like her. She’s had a tie back (surgery) and that’s probably held her back a bit but it’s her fourth run back now and it was a terrific effort,” Widdup said.

Ford rode a perfect race on Adelong from barrier eight after they just got beat by Albumin at Rosehill a fortnight ago.

Albumin isn’t the same horse at Randwick however and Adelong was easily able to reverse the defeat which wasn’t a surprise to her jockey.

“She has been very consistent, she was due to break through,” Ford said.

“I liked the set up today. She drew outside Marway which just enabled us to follow it across. She is a tricky horse, if you set her alight too early she won’t some back so you just need to be able to glide along on her but the way the race unfolded today really suited her.”

Ford did everything to ensure his mount could win but even he was a little shocked at how well she got past the raging favourite who had been dominating races of late.

“It did surprise me a little bit how easily I came up to Marway in the straight but she has been going really well and she deserved this breakthrough,” Ford said.

“She just needs the race to unfold the right way for her because she is a bit temperamental.

“When you tell her ‘go’, there’s no stopping her. When you’ve got a speed horse like that (Marway) you can just tag off and you don’t have to push or pull, it’s an ideal scenario.”

Widdup has done a good job with Adelong to get her strike rate to where it is in the tough Sydney racing scene where she’s been a regular in Saturday racing for a few preparations.

Now it’s time to make the daughter of Medaglia D’oro a more valuable horse for later in life.

And punters should see her again on June 12 in another 1100m race.

“We’re chasing a bit of black-type and there’s the Bob Charley Stakes in a couple of weeks and that’s probably what I’ll look at,” Widdup said.

“We could go up to Queensland or stay here. We want black-type and this race today was a solid ace. I’d like all those horses in my stable.

“They’re not easy to win but when she gets it right she is very good.

AT THE TRACK WITH MATT JONES

Chief steward Marc Van Gestel was not happy with Lee Magorrian for his lack of vigour on Loving Cilla in the Highway.

“I was niggling a bit and I thought I did enough on it,” Magorrian replied.

“What if I say you’re doing nothing on it?” asked Van Gestel. “We’ll never know where the horse would’ve finished.”

“I’ll improve on that in the future, sir,” he said.

But Van Gestel had little sympathy.

Magorrian was charged with not riding the horse out and fined $500.

He was then criticised for using his whip too much on Shuffle Up when it was out of contention later in the day. He was charged for that too and fined $500 also.

Adkins not falling for that

Andrew Adkins has come back from more adversity than most jockeys in recent years after a few really bad falls.

He said he hasn’t once thought about what could go wrong again.

“If you hold on to those thoughts from a fall you’ll go nowhere. If you lose your nerve you shouldn’t be riding horses,” he said.

“You won’t bounce back if you’re a bit nervous.

“It’s happened that many times that I’ve got used to it. I live and dream this so getting back on a horse is never a problem.”

Keagan Latham told us which race — as a South Africa jockey — he most wants to win at the moment, but it might not be the same answer down the track.

“I think it has to be the Melbourne Cup,” Latham said.

“In a decade though, The Everest might overtake the Melbourne Cup.”

Pierata at stud won’t be a dud

Greg Hickman always has a good horse in his stable but Pierata will always have a soft spot in his heart.

The Group 1 winner is attempting to be a success at stud and we’ll know in coming seasons if his new career will pay off.

“I can’t wait for his first foals to hit the ground and I’m looking forward to seeing them in the sale ring and saying ‘that’s the one I want’,” Hickman said.

“He’s never let me down with anything I’ve ever done with him. We knocked back a million dollar offer for him in the early days and he’s backed me up ever since.

“I can’t see why it wouldn’t be any different with his new lifestyle.”

One leading trainer wasn’t a fan of how loud the DJ was playing tunes throughout the day at Randwick.

Neither was this writer, who is long past 18 years of age.

However, most people in the crowd were in their late teens and early 20s so it did the trick and is a positive sign for the future of the sport.

■ There’s been a new sign put up (above) outside Albury racecourse to keep the horses safe and warn the drivers going past. The local trainers are very happy.

■ Speaking of dangers to horses, this alligator was causing a disturbance on the racing track at Delta Downs in Louisiana during the week. Fair Dinkum!

Sack: Feel The Rush (plain) Ayrton (didn’t live up to it)

Quote: “Is he a horse that can eventually get to a Sydney Cup? The 3200m could be his go” — Charlie Duckworth after No Compromise’s win.