The Cox Plate has been flipped on its head, with favourite Russian Camelot suffering a shock loss to West Australian star Arcadia Queen in Saturday's group 1 Caulfield Stakes.

The Bob Peters-owned mare has struggled with feet issues over the past 12 months, but co-trainer Grant Williams opted to remove the bar plates on Saturday.

It was a decision that helped her find what was needed to knock off racing's poster boy, Russian Camelot, the Willie Pike-ridden Arcadia Queen ambling past the odds-on favourite to win comfortably. 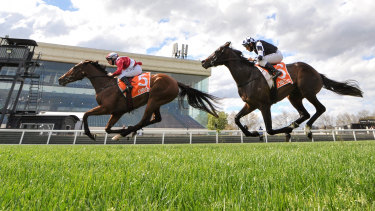 Bar plates off: Arcadia Queen, ridden by William Pike, was ahead of the pack at Caulfield. Credit:Racing Photos

The Danny O'Brien-trained Russian Camelot was a $1.50 shot on Saturday and was also the $2.80 favourite for the Cox Plate in two weeks' time, but with Arcadia Queen back to her best and the internationals yet to race, the 2040-metre classic now looks up for grabs.

Williams said he was waiting for the right time to make the gear change.

"I've always had it in my mind I'd like to take them off close to the grand final," he said.

"I spoke to Bob and it was over a few conversations we had to make a decision. We were thinking about taking them off for the Cox Plate but I thought I'd like to take them off to give her a feel without them before the Cox Plate. 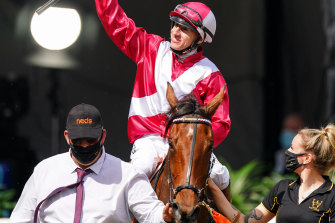 "The bars will go back on Monday as a maintenance thing and then we'll do the same thing we did today for her next start."

O'Brien said there were no excuses with Russian Camelot's performance.

"We were hoping he'd be the winner but he's been beaten in an exceptional performance by Arcadia Queen," he said. "She's been comprehensively better than him today and we certainly wouldn't be making any excuses.

"Hoping maybe when we go to Moonee Valley the race has a bit more pressure. Maybe our guy might be looking for a bit further now but no, full credit to the winner. She's gone super and our guy wasn't good enough."

Meanwhile, Team Hawkes have proved themselves adept over the decades at shuttling horses between their Sydney and Melbourne stables and they got it right once again in the group 2 Schillaci Stakes . They sent sprinter Dirty Work down from NSW for his first Melbourne start in seven months, the son of Written Tycoon duly obliging under a well-judged ride from Perth champion Pike. 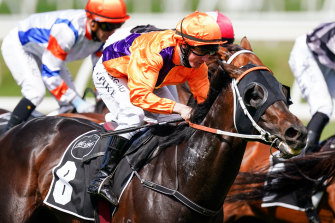 Dirty Work's previous best success had been in a listed race at Rosehill last May, but he had shown he was improving with competitive efforts earlier this preparation in the group 3 Concorde Stakes and the group 2 The Shorts, behind Gytrash and Classique Legend, both of whom are strongly fancied for next weekend's The Everest.

Dirty Work could now himself be a last gasp contender for the $15 million race if Chris Waller, who owns the last slot, opts to select him following his win in the Schillaci. Last year'sSchillaci winner Trekking backed up quickly and ran third in the richest race on Australian turf.

Trainer Wayne Hawkes was circumspect when asked about that possibility immediately after the race, instead happier to talk up his horse's prospects as a stallion.

Pike kept his cool after his mount was last turning into the straight as Splintex and Hey Doc made the best of their way home. Diamond Effort looked to have put the race in safe keeping until Dirty Work pounced late to take the spoils.

TAB trimmed Dirty Work's odds for The Everest in from $34-$26. He is an $11 chance for the group 1 Manikato Stakes, run on Cox Plate eve at Moonee Valley.

Cyrname could head to Ascot rather than Wetherby