Melbourne Cup topweight Anthony Van Dyck has been euthanised after breaking down during the race.

The horse, which broke down at the 400-metre mark, became the seventh to break down during the famous race since 2013.

Anthony Van Dyck was ridden by star jockey Hugh Bowman, who on the eve of the race dismissed concerns about the massive weight the horse was carrying in the Cup. 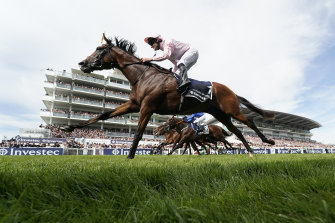 "It is with sadness that we confirm that Anthony Van Dyck had to be humanely euthanised after sustaining a fractured fetlock during the running of the Melbourne Cup at Flemington," Stier said.

"The horse received immediate veterinary care, however he was unable to be saved due to the nature of the injury sustained."

Bowman immediately dismounted and a horse ambulance made its way onto the track to attend to the injured horse as its strapper ran up the straight to be with him.

Anthony Van Dyck was one of the race's main fancies, having finished second in the Caulfield Cup and been a winner of the English Derby in 2019. He was carrying 58.5 kilograms in the race and was trained by Aidan O'Brien.

O'Brien also trained The Cliffsofmoher, who broke down in the 2018 Melbourne Cup. Rostropovich broke down last year but recovered from an injured pelvis.

Clan on course for King George despite cut at Haydock

Crowds could return on Wednesday under post-lockdown tier system