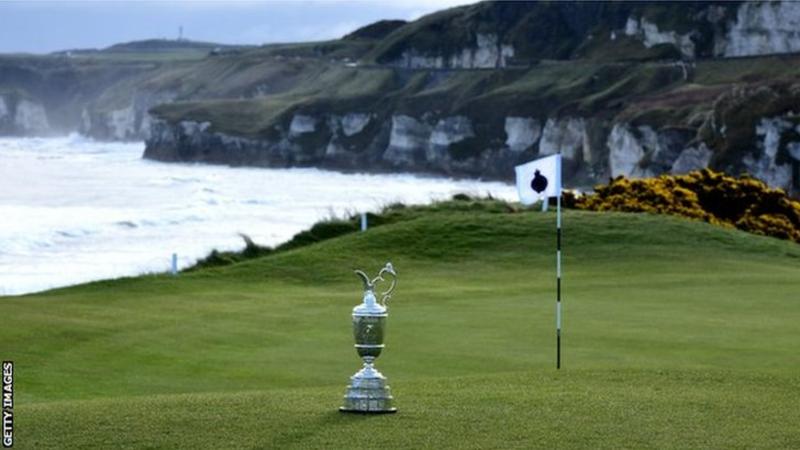 Gary McNeill has been head professional at Royal Portrush for the past 20 years. A former Irish Amateur Champion, no one knows better the Dunluce course staging its first Open since 1951.

Compared with when Max Faulkner triumphed in 1951, the famous Harry Colt design has undergone considerable change, including two new holes to replace the old 17th and 18th.

Gary gave me the inside track on how the world’s best players will tackle the new challenge of the Northern Ireland course this week. 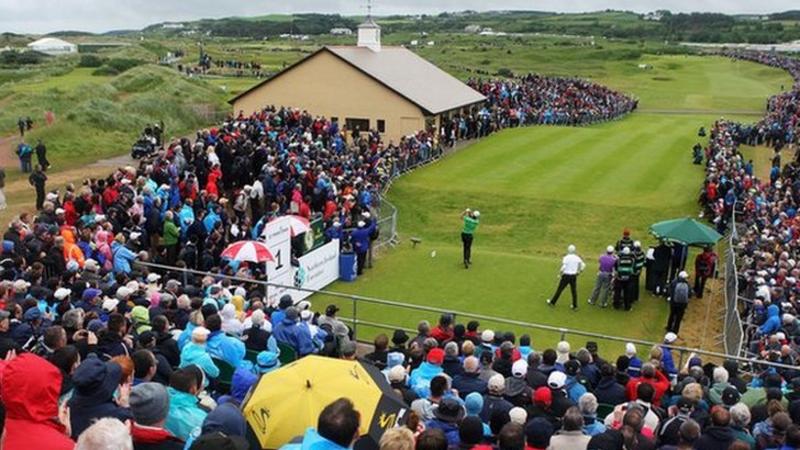 A very good start with potential for real drama. Placement off the tee is key. There is a bunker on the right at 262 yards and one on the left at 291 so the guys will hit something that does not reach that second hazard. It will be a mid to short iron up a steep incline to the green. If they are attacking a front pin, a false front comes into play and balls could easily spin back down the hill. The majority will be happy with an opening par. 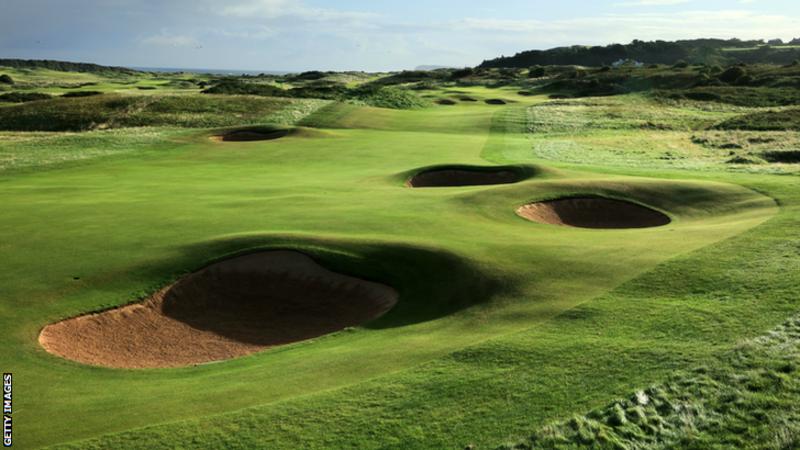 They have to avoid bunkers and rough off the tee. It gets quite narrow because there is a new bunker on the left around 300 yards from the championship tee. The driving line is just to the right of that. There are three bunkers on the right as well. But if the fairway is found, the green is within reach. There are plenty of tricky undulations short and left of the green. 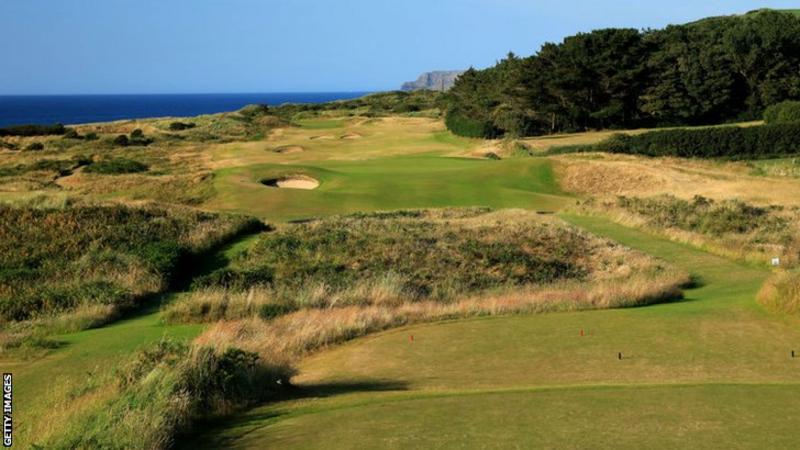 One of the most elevated parts of the course, so the wind can become a factor. Named Islay because of the beautiful views out towards the Scottish isle, which is only 20 miles or so away. It is a mid/short iron with just one bunker short left of the green. Miss this putting surface and it is a very difficult up and down. You have to be careful if you attack the flag. 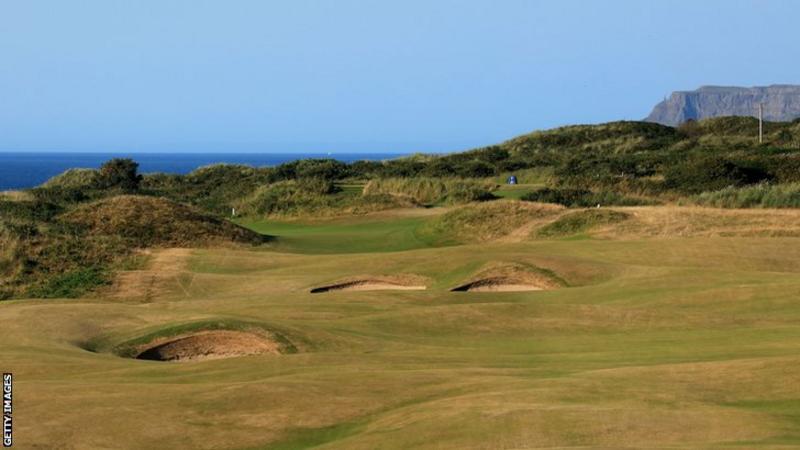 Named after the 1947 Open champion, who was born in Portrush, it is a very strong par-four hole, which is stroke index one on the members’ card. There is out of bounds down the right side, reminiscent of the 11th at Royal Troon. A couple of bunkers on the left need to be negotiated, the second of them is 280 yards from the tee. They will use the first trap as the driving line with a second shot slightly uphill to a green nestling in sand hills. All the trouble is at the front of the green and it is another hole where par is a good score. 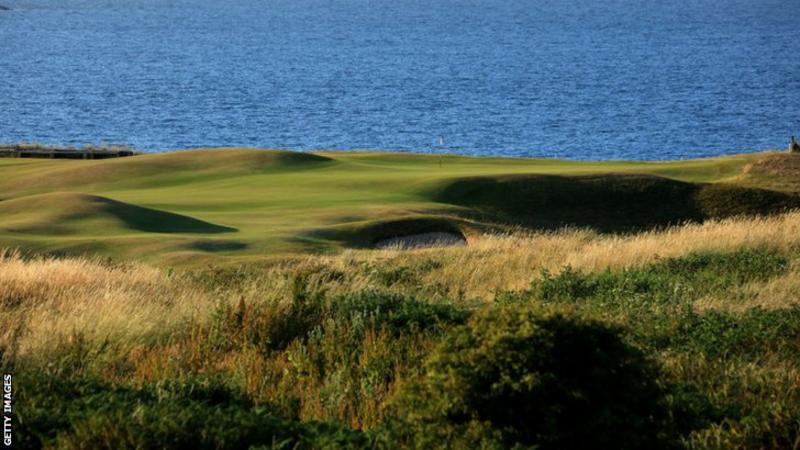 A risk and reward hole. The R&A have indicated they are happy to use a forward tee to entice the players to have a crack at the green. There are two bunkers at 280-290 yards which come into play with the tee shot. The green is perched on the cliff top and they could go out of bounds just two or three yards over the back. It will offer plenty of birdies, but the green is interesting with a step in it and runs away at the back. 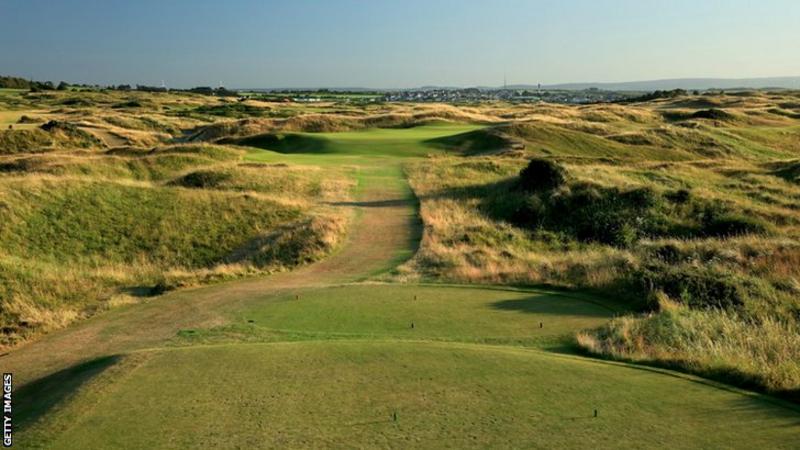 Named after the original course designer, there are no bunkers but a green that sits high on a plateau. It is a generous putting surface but a miss will pay a price because it is difficult to get up and down successfully. Any front pin position brings into play a false front and the key is a tee shot that flies all the way onto the green. 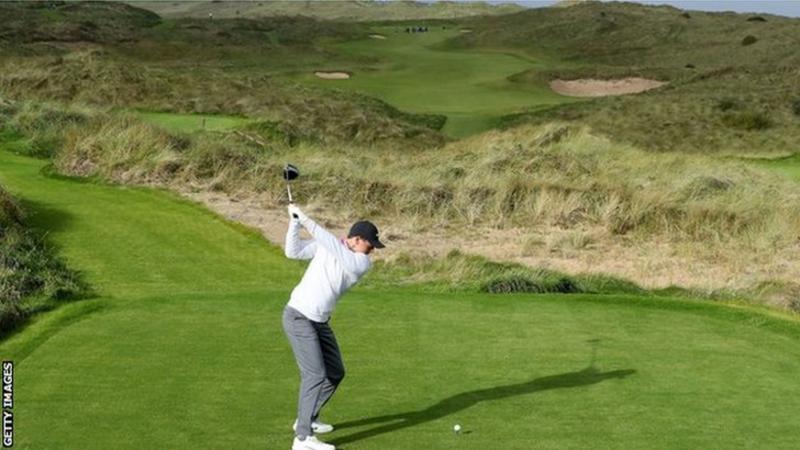 The first of the two new holes is a very strong par five from an elevated tee into the valley with natural high dunes along the right side, separating the course from the beach. There is a big bunker on that flank which requires a 300-yard carry. The hazard is a nod to the famous “Big Nelly” bunker that was on the old 17th. The second shot is uphill and the landing area narrows as you get nearer a green that has plenty of undulations. It should be in range after a good tee shot despite playing into the prevailing wind. 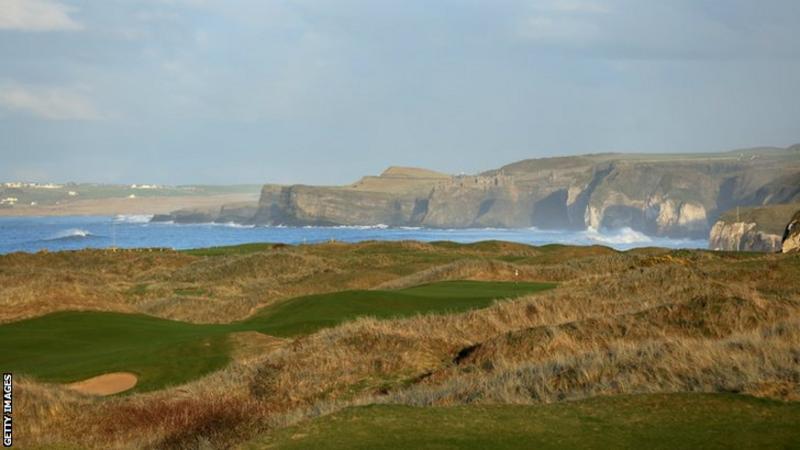 The other new addition with a 230-240 yard carry over a chasm to reach the fairway from the championship tee. Players can attack and take a tight line on the left side to get closer to the green. The majority will play towards the second of two bunkers on the right side. It will likely play downwind. The second shot, with cliffs and Dunluce Castle in the backdrop, turns left towards another undulating plateau green. You are dead if you miss on the left. 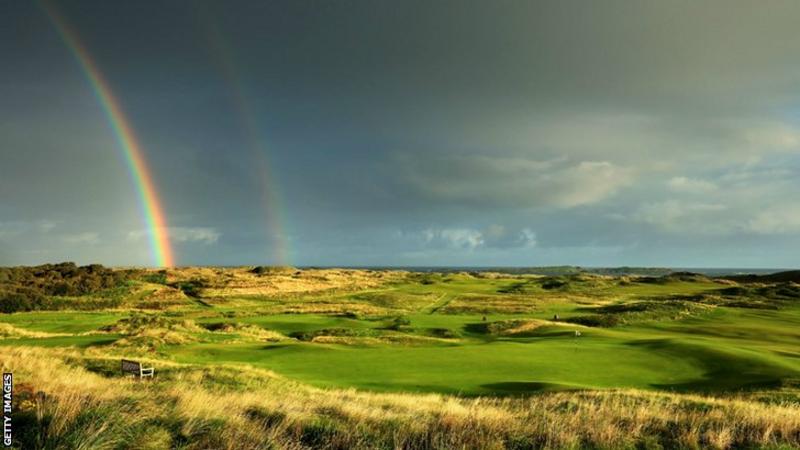 This is the old seventh, a dogleg that swings slightly from right to left. There is a new bunker on the right 250 yards out. The second shot plays uphill with the green sitting a little sideways with a swale to the right. This tends to be a busy spot during tournaments. The green slopes quite a lot from back to front. 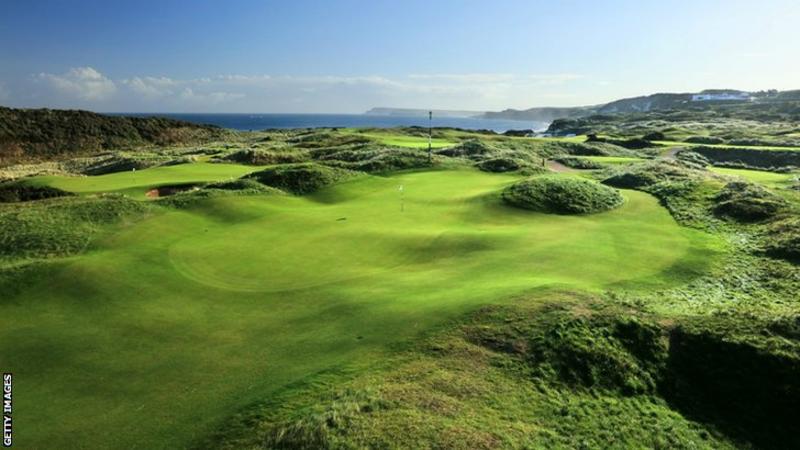 We have added a good 70 yards to this hole over the last couple of years. No bunkers, but this tee shot needs to be up the left side and has to go 290 yards to get a look at the green. It is a long, undulating, re-contoured green and the back section is particularly narrow with mounds left and right. The right side of this hole is to be avoided at all costs. 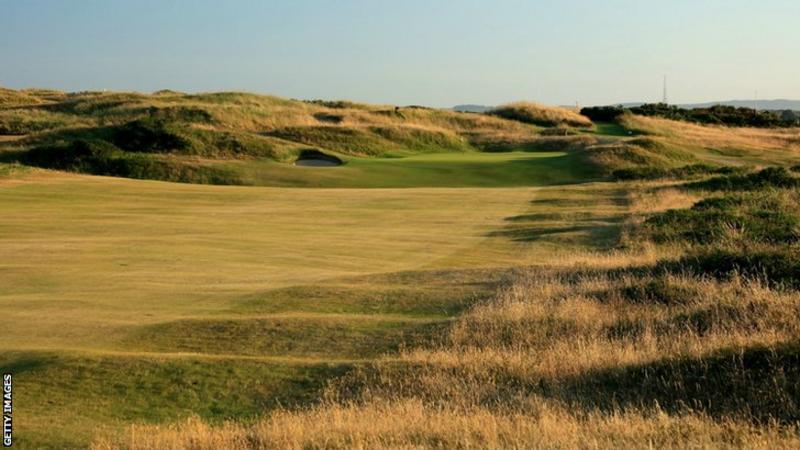 A par five for the members but a par four on the championship card. Trouble on both sides makes a challenging drive but negotiate the corner at 260 yards and the fairway opens as it swings to the right. There is a valley in front of another plateau green with just one bunker on the left of the putting surface. Like many holes, the green sits up for the second shot. The ball has to be carried all the way, meaning the fairway must be found to leave a shot capable of holding the putting surface. 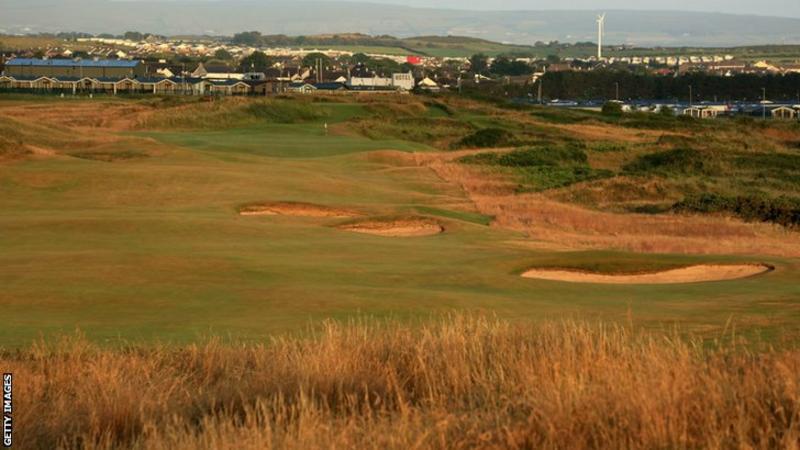 The only par-five chance on the back nine. It narrows at driving distance where the bunkers on the right come into play with rough pretty severe on the left. A good drive into the fairway offers an obvious birdie opportunity and perhaps some eagles. But it is quite a difficult sloping green and there is a stream on the right that has been extended. It is the only water at Royal Portrush. 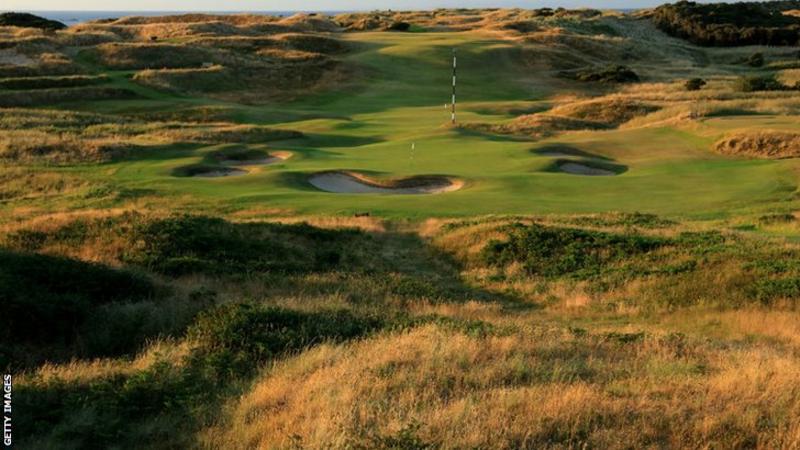 A downhill short hole with five bunkers around a green which runs from front to back makes a tough tee shot. The prevailing wind is off the left so it is a good hole with a couple of cracking grandstands there as well. 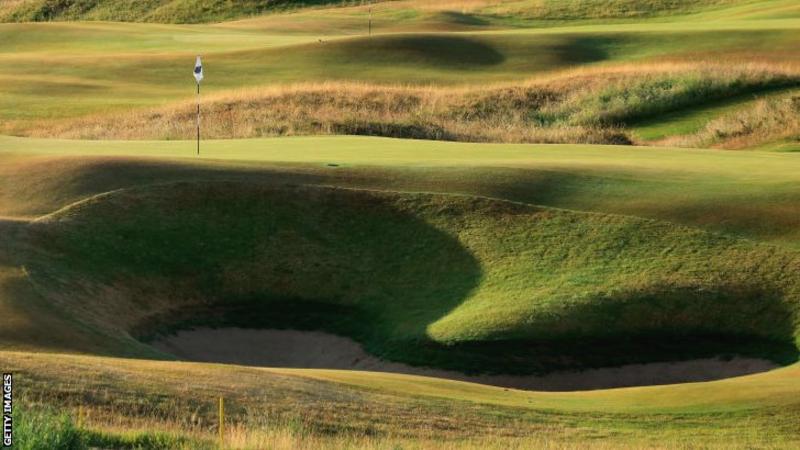 Another new championship tee stretches this one with a bunker down the left at 328 yards. The hole tilts from right to left and it is all about the second shot. There are fall-away areas all around the green with a horrible bunker on the left of the putting surface. It is not a big target and if this plays into the wind it could prove the biggest test on the inward half. 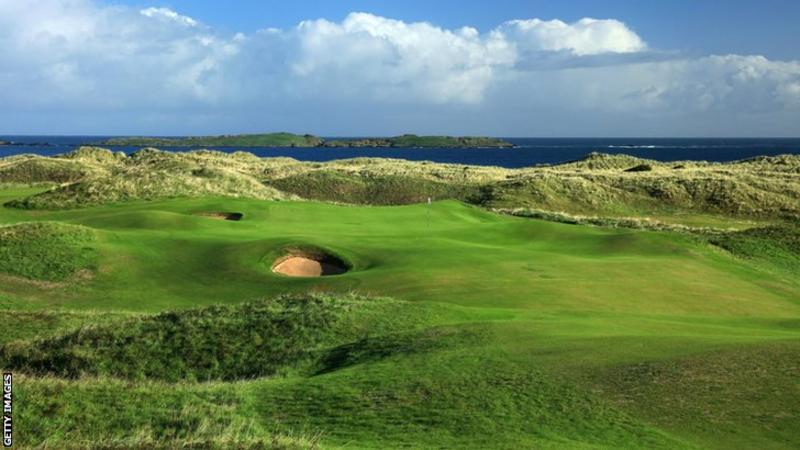 An uphill drive on a hole that doglegs left with bunkers on the right which grab players’ attention, especially the one 275 yards from the tee. But it is quite a generous fairway. The ideal position is 280-290 yards from the tee which gains a good view of the green for a slightly downhill second shot. There will be beautiful views of the sea and the Skerries islands. A back right pin will be very challenging. 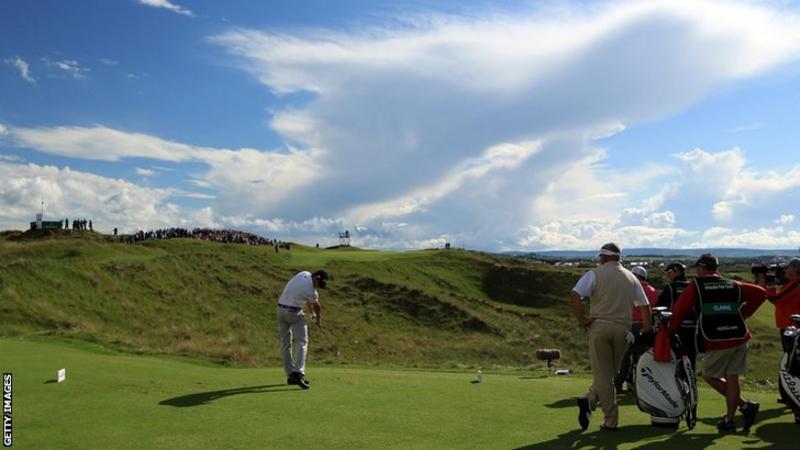 This world famous short hole has been stretched to 236 yards. There is a deep chasm on the right and Bobby Locke’s hollow is the only respite. Situated on the front left corner of the green, it is where the South African is alleged to have played each day in the 1951 Open. This is a difficult elevated green, with the wind likely to affect putting. 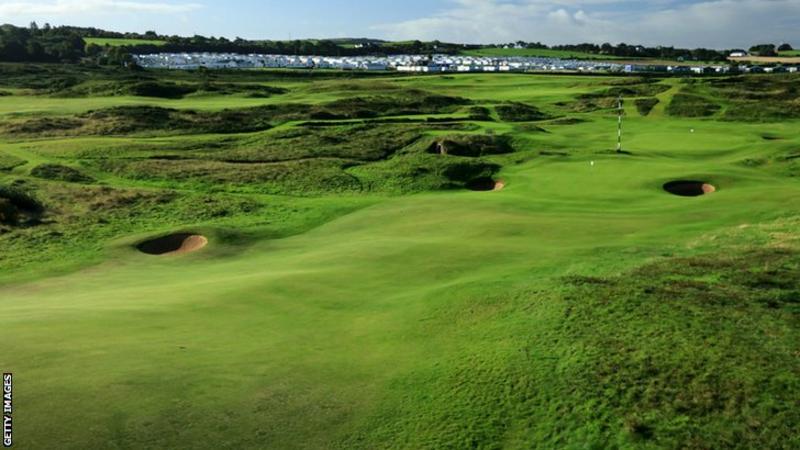 A dramatic fall from the 300 yard mark means balls running over the top can tumble to the front of the green. A new bunker lurks to catch anything pulled left off the tee and there is gorse too. So it is a risk/reward hole and if the wind cooperates, longer hitters will have a crack at the green. As the 71st hole it could play a big part in the outcome. 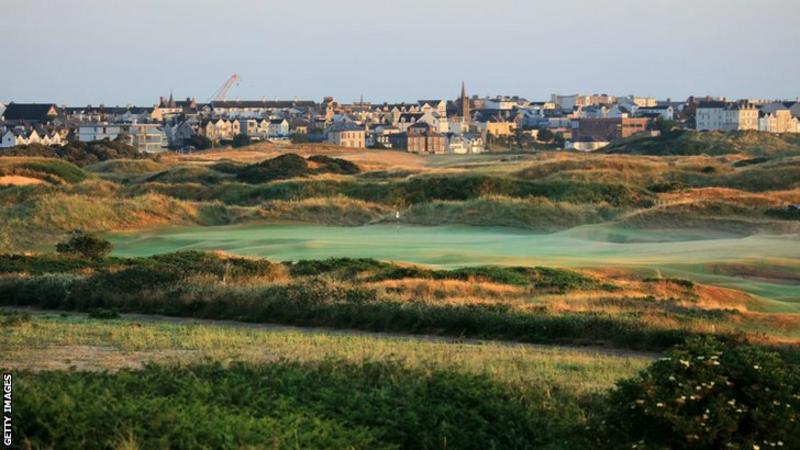 A very strong closer. The tee shot is from an elevated tee to a fairway that swings to the right. The ideal line is left of centre, opening a good view of the green. But there is out of bounds on that left side. This is the fence line where Max Faulkner famously played an intentional slice onto the green when he won in 1951. Back then it was the 16th hole. Nowadays it is a mid-iron to the green with just one bunker guarding the front right and dramatic run offs to the left. Back left is the premium pin position while any hole locations on the right bring in a lot of subtle undulations.

Hang on … how does this shot from Tiger Woods not go in?