The 2022 Ryder Cup at Marco Simone Golf and Country Club in Italy will take place from September 30 to October 2, organisers said on Monday (local time).

It will be the first Ryder Cup in Italy, with the country following England, Scotland, Spain, Ireland, Wales and France as European nations to host golf's biennial contest between Europe and the United States. 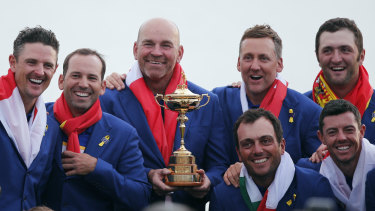 Members of the victorious European side at the 2018 Ryder Cup.Credit:AP

The dates of the 2022 matches were confirmed in the same week as the European Tour's Italian Open.

The Marco Simone club, which will also host the Italian Open in 2021, is undergoing a renovation programme in preparation for the Ryder Cup and all 18 holes will be reconstructed at the golf course on the outskirts of Rome.

Ireland's Padraig Harrington will captain Europe at next year's Ryder Cup as they look to defend the title at Whistling Straits, Wisconsin.

WGC-Mexico Championship: Tee times for opening round at Chapultepec