Adam Scott – one of the most vocal critics of golf's return to the Olympic Games three years ago – has left the door only slightly ajar to spearhead Australia's team in Tokyo after conceding it was "not a priority".

The former US Masters champion, the only Australian to don the famous green jacket, returns to Sydney for the Australian Open while enjoying a career renaissance and in the box seat to claim one of two Australian spots at the 2020 Games. 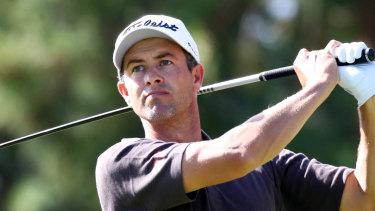 Adam Scott says a spot in Tokyo for next year’s Olympic Games is “not a priority”.Credit:Getty

The 39-year-old opted out of selection for golf's Olympics comeback in Rio and it will again be part of a crowded international schedule next year.

Scott leads the rankings race from Marc Leishman (world No.27), Jason Day (31) and Cameron Smith (52) for one of two spots in Tokyo.

But Scott labelled the Games format – a traditional 72-hole individual strokeplay event rather than teams event – as "incredibly disappointing" before claiming he hadn't yet made a firm decision on whether he would commit to Tokyo.

"I haven't prioritised [playing in Tokyo]," the world No.15 said. "I haven't ruled it out, but it is certainly not my priority. We will see how the year shapes up for me. It is possible, absolutely.

I haven’t ruled it out, but it is certainly not my priority. We will see how the year shapes up for me

"[But] I still question strongly why it is there. I don't see the need and I know it is going to be a very successful event in Japan because Japan do [everything well]. I think you always have to stay open minded. But I just don't want to hastily say no and be silly based off more emotional things.

"It is not in a great place in the schedule if you are treating other things seriously."

The opening round of the men's tournament in Tokyo will be played less than a fortnight after the year's fourth major, The Open at Royal St George's.

Scott is considered Australia's best chance of a medal in the men's division after his ranking climbed amid one of his best years on tour in recent memory.

He's also been a regular visitor to Japan in recent years due to his association with clothing manufacturer Uniqlo.

Day has pulled out of the Australian Open and next week's Presidents Cup in Melbourne after his chronic back problem intensified in recent weeks.

Scott Hend and Marcus Fraser represented Australia in the men's tournament in Rio.

Scott's good friend and former US Masters hero Sergio Garcia, who this week said he desperately wanted to return to the Games representing Spain, will spearhead this week's Australian Open with the former suggesting the format was unsuitable.

"Three or four years ago when they announced it, I think it was incredibly disappointing that it was just a 72-hole stroke [event]," Scott said. "I don't think we're getting the best out of it.

"I think we probably should have asked for a bit more out of it to do the good that it was intended to do. My thoughts are kind of deep on it. It is important stuff."

Scott insists his focus is solely on the national championship at The Australian Golf Club this week. He will lead the Ernie Els-captained International side against Tiger Woods' Americans in the Presidents Cup next week.

Scott hasn't played in the Australian Open for the last two years.

"I try and do the right thing, but sometimes you have to be a bit selfish and do the right thing by yourself and I did last year," he said. "You have big changes throughout and the most frustrating thing if I look at my career is that I didn't win more tournaments in a period when I'd say I played my best golf from '11 through to the end of '16.

"I played really well in that period and I did win some tournaments, but it's frustrating looking at it thinking, 'I didn't win another Aussie Open or a couple of more Aussie Opens during that stretch and majors for that matter'.

"The good news for me is I think I've got another stretch in me like that all things going well."