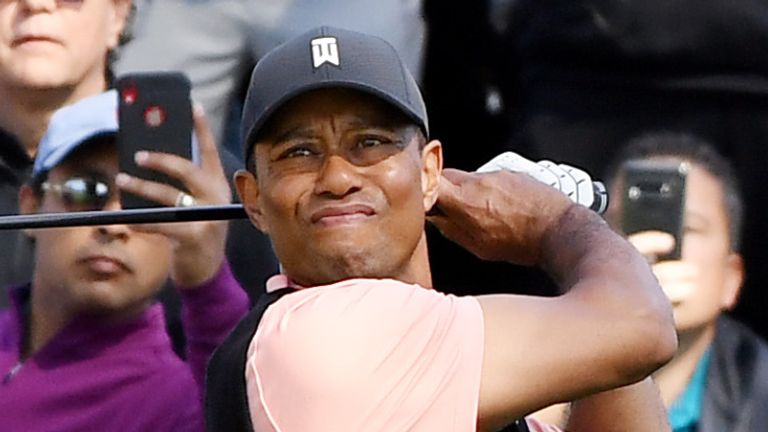 Matt Kuchar was in a class of his own on the first day of the Genesis Invitational as Rory McIlroy enjoyed an encouraging opener, while Tiger Woods faltered following a sensational start at Riviera.

Kuchar’s seven-under 64 was three shots better than anyone else could manage in the first round as he upstaged a stellar field featuring nine of the world’s top 10 in the final event of the West Coast swing.

New world No 1 McIlroy overcame a “very sluggish start” and made two eagles in three holes in the middle of his 68, while tournament-host Woods eagled the first and cruised to the turn in 31 before struggling with directional issues on the back-nine and settling for a 69 along with the likes of Brooks Koepka and Jon Rahm.

But it was Kuchar who stole the show as he flourished in the frigid, early conditions, the 41-year-old making birdies at three of his first four holes before he dropped a 30-foot putt for a rare birdie at the tough 18th.

Kuchar picked up further shots at the first and fifth, and another long-range putt found the target for his seventh birdie of the day on the eighth green, and his early clubhouse lead was not threatened throughout the remainder of the day.

Russell Henley’s 67 began with nine straight pars before he followed an eagle at the first with back-to-back birdies before parring the last six to stay in a tie for second on four under, with McIlroy a shot further back along with Rafa Cabrera-Bello, Patrick Cantlay, Bryson DeChambeau and Jason Day. McIlroy started at the 10th and had to dig deep to scramble pars over the first third of his round, dropping only one shot when he three-putted the 12th green, but he suddenly got into red numbers when he hammered a 290-yard fairway-wood to the heart of the green at the 17th and holed from over 30 feet for eagle.

He gave one shot back after a blocked drive at 18, but he was back on the eagle trail at the first thanks to a smooth seven-iron to five feet, and his lone birdie of the day arrived at the fifth before he parred home to stay inside the top 10 at three under par.

Woods, chasing his first career victory in this event, looked a likely challenger to Kuchar’s lead when he drained a 25-footer for eagle at the first and, after missing a good chance at the next, he knocked sweet approaches to inside three feet at both the fifth and eighth and converted both for birdies.

But a wayward driver forced him into scrambling mode as he hit only one fairway on the back nine, although he could not take advantage of being on the short grass at the 12th as he tugged his second long and left and missed from six feet to save par.

Woods had to work hard to avoid further blemishes until the 18th, where he carved his drive into the right rough, pitched back out to the fairway, and a pulled third led to a two-putt bogey from 30 feet as he slipped to two under and into a huge group that included Rahm, Koepka, Paul Casey, Justin Rose and defending champion JB Holmes.

“I got off to a nice start on the front nine and just didn’t hit many good shots on the back nine,” said Woods, who revealed he had struggled to get in much practice over the week due to his many obligations as tournament host.

He made it. For eagle. 💛💜 pic.twitter.com/dnlEPtXaci

“I was trying to piece it together on the range and I did a good job of figuring out how to make solid contact and get the ball heading in the right direction and was able to get off to a quick start there with a quick three. Hit a lot of good shots on the front nine, and the ones I did miss were generally left and obviously didn’t hit them right.

“I haven’t had a whole lot of time to practice this week, I’ve been a little bit busy. First time I saw the range was for about 10 minutes warming up for the pro-am. I really haven’t hit a lot of balls, so I was just trying to get a nice movement pattern, trying to shape some shots.