The 149th Open Championship scheduled for Royal St George's from July 16-19 has been cancelled due to the coronavirus pandemic, golf's governing body confirmed on Monday. 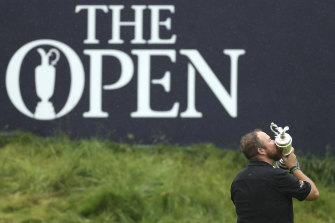 "The R&A has decided to cancel the Open in 2020 due to the current COVID-19 pandemic," it said in a statement. "The Championship will next be played at Royal St George's in 2021."

The Open was last held at Royal St George's in Kent on England's south-east coast in 2011 when Darren Clarke claimed victory.

Martin Slumbers, chief executive of the R&A, said the decision had been made with a "heavy heart".

"We appreciate that this will be disappointing for a great many people around the world, but this pandemic is severely affecting the UK and we have to act responsibly," he said.

"I can assure everyone that we have explored every option for playing The Open this year but it is not going to be possible."

It is the first time since 1945 that the British Open will miss a year.

The Open is the only one of this year's majors to be cancelled. This month's Masters and PGA Championship have been postponed, while the US Open at Winged Foot, New York in June remains on the calendar, for now at least.

Shane Lowry of Ireland would have been hoping to retain the trophy at Royal St George's.

"Obviously I'm disappointed that I won't get to defend my title but people's health and safety come before any golf tournament," he said in a video posted on Twitter.

"I'm sure the R&A have thought long and hard about this. You can guarantee the Claret Jug is in safe hands for another year and I look forward to seeing you all in 2021."

Preparations for staging the Open involve a huge logistical operation and the "build" would have begun soon in Sandwich on the Kent coast.

Slumbers said it would have been unreasonable to put any extra pressure on the local authorities.

"We rely on the support of the emergency services, local authorities and a range of other organisations to stage the Championship and it would be unreasonable to place any additional demands on them when they have far more urgent priorities to deal with," he said.

The R&A said tickets and hospitality packages purchased for the 2020 championship would transfer to 2021 with full refunds for those who cannot attend next year.

Apart from stoppages due to world wars, the only other time the Open has been cancelled was in 1871 because there was no trophy – Tom Morris jnr having been allowed to keep the Challenge Belt for winning the tournament three times in a row.

The British sporting calendar, like that across the world, has been decimated because of the coronavirus pandemic.

Last week the Wimbledon was also cancelled for the first time since World War II, while the soccer, rugby and cricket seasons are all suspended.

Get our Coronavirus Update newsletter for the day’s crucial developments at a glance, the numbers you need to know and what our readers are saying. Sign up to The Sydney Morning Herald’s newsletter here and The Age’s here.

Golf trick-shots of the week: Goals, slabs, pans and more!

Next scheduled events for each professional golf tour worldwide…