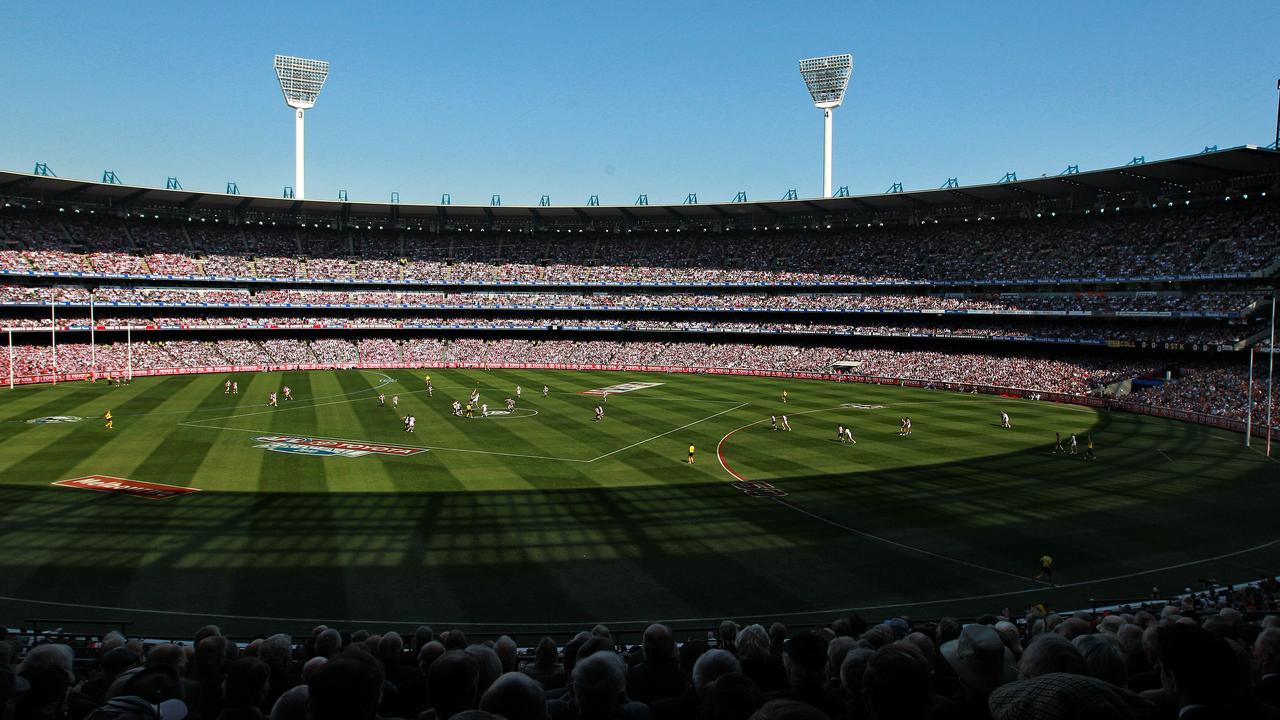 The AFLW Grand Final time and date have been set in stone and now its over to the clubs to determine whether the hosting venue will be Adelaide Oval, The Gabba in Brisbane or the MCG.

The league announced on Wednesday that the AFLW showpiece would be handed a stand-alone timeslot of 2pm AEST on Saturday, April 17.

If top side Adelaide accounts for Melbourne in this weekend’s preliminary final, the season decider is guaranteed to be held at Adelaide Oval.

If the Crows stumble and second-placed Brisbane beats Collingwood, the Lions win the right to have the Grand Final at The Gabba.

But Collingwood (third) and Melbourne (fourth) would both have to spring upsets for the first-ever AFLW Grand Final to be played at the MCG.

The MCG could play host to the AFLW Grand Final.Source:Supplied

The AFL also moved to give the women’s play-off clear air by pushing back the start of the men’s Round 5 clash between the Western Bulldogs and Gold Coast — from 1.45pm AEST to 4.35pm.

AFL General Manager Women’s Football Nicole Livingstone said as per the first two weeks of the finals series, tickets to the Grand Final would remain at $10, while children aged under 18 would attend for three.

AFL chief executive Gill McLachlan said season five of the AFLW competition had been the best one yet.

“The Finals Series has so far proven to be an extremely competitive one — any of the top four teams can win through to the Grand Final,” he said.

“We are calling on the whole Australian Football community to come and see our best performing teams compete for the Premiership.”

AFL General Manager Women’s Football Nicole Livingstone said as per the first two weeks of the finals series, tickets to the Grand Final would remain at $10, while children aged under 18 would attend for three.

Collingwood takes on the Crows this weekend for a spot in the Grand Final. Picture: Getty ImagesSource:Getty Images

“We hope to see as many supporters as possible attending what shapes up to be an exciting contest between the Competition’s two strongest sides of 2021,” she said.

“I would love nothing more than to see a packed Adelaide Oval, MCG or The Gabba, watching women’s football at the highest level.”

Adelaide, who finished as minor premiers, take on Melbourne at Adelaide Oval on Saturday.

The winner of that match will play either Brisbane or Collingwood, who play after the first preliminary final, whp clash at the Gabba.

For a MCG Grand Final, the Pies will have to defeat Brisbane while Melbourne would have to shock the Crows.

Brisbane’s wet weather is forecast to clear for the Saturday’s do-or-die preliminary final clash against Collingwood, with tickets going on sale to the public from 3.30pm Wednesday.

Tickets will be $10 for adults while children under 18-years-old will be allowed free entry.

Adelaide Oval will be able to have a crowd of up to 40,000 for the Crows AFLW preliminary final match against Melbourne.

Tickets will go on sale on Wednesday for the clash.

The Oval’s current COVID management plan will apply for the preliminary final, meaning 75 per cent of the stadium can be filled on Saturday.

‘IT IS WHAT IT IS’: PIES STAR PLAYS DOWN AFLW CLASH

‘It is what it is’: Pies star plays down AFLW clash

Collingwood co-captain Stephanie Chiocci says the AFLW would “love to take over the channels” and have its own space in the sporting calendar but accepts the scheduling problems that currently present themselves.

The AFL has been criticised for failing to give its women’s competition clean air during the finals series, with matches clashing with big days of men’s fixtures.

The Magpies will play a preliminary final against Brisbane Lions on Saturday at 4.10pm, after a clash between Adelaide and Melbourne at 2.10pm on the same day.

The AFL has a men’s match on Thursday night this week but still has two bumper games scheduled on Saturday afternoon, with the Western Bulldogs playing Brisbane in Ballarat at 1.35pm and St Kilda hosting West Coast at Marvel Stadium at 4.35pm.

“In an ideal world, we’d love to take over the channels and be the only game playing,” Chiocci said.

“But it’s the way it is at the moment. We’re fully understanding of that. We’re playing in a summer competition.

“I look forward to the day that we are a stand-alone competition where it’s not clashing with any other sport. But for the moment it is what it is.

“We just want to make sure we put on a good show for our Collingwood fans and get the win on the weekend. That’s what we’re focused on for the moment. We’ll let others talk about the media stuff and the clashes and all those sort of things.”

The AFLW Grand Final is scheduled to be held on the weekend of April 17 and 18.

There are four men’s matches schedule on April 17 and three on April 18.

Fox Sports has launched a dedicated Women’s channel for the month of April, which is showcasing the AFLW finals.

Collingwood is ready for a preliminary final showdown against Brisbane at the Gabba. Picture: Getty ImagesSource:Getty Images

They are known at Collingwood as the ‘Original Gangsters’ — or OGs for short — and the five members of the special group had extra reason to celebrate on the weekend.

Having been on the journey with the Magpies since the club’s inaugural AFLW season in 2017, the “OG’s” finally got a taste of finals success as they helped the club to a semi-final victory over North Melbourne.

“I was a little bit emotional when the siren went,” Chiocci said.

“There’s only five of us left from the first season. We’re really enjoying this ride at the moment. I’m just super proud that all the hard work’s starting to pay off.

“Steve Symonds (Collingwood coach) came in at the start of last year and ignited the fire in us and invested in our young talent. Girls saw what path we were on and wanted to be part of the journey.”

The Magpies now have Brisbane in their sights in a preliminary final showdown at the Gabba this Saturday as they look to swoop their way into their first Grand Final.

Symonds had written “Fight all the way” on his whiteboard before the semi-final clash with the Kangaroos, which Collingwood won by six points after trailing by 14 points early in the last quarter.

The Magpies fell to the Lions by three points when the sides last met in Round 7, but Chiocci said the group would again be fighting until the final siren this weekend.

“They don’t really have many weaknesses, the Lions,” Chiocci said.

“But we’re very resilient, big fighters and the girls were ready to grit their teeth and get the job done against the Kangaroos.

“I’m fairly confident that our girls can prepare well again and find a way to get through them this weekend.”