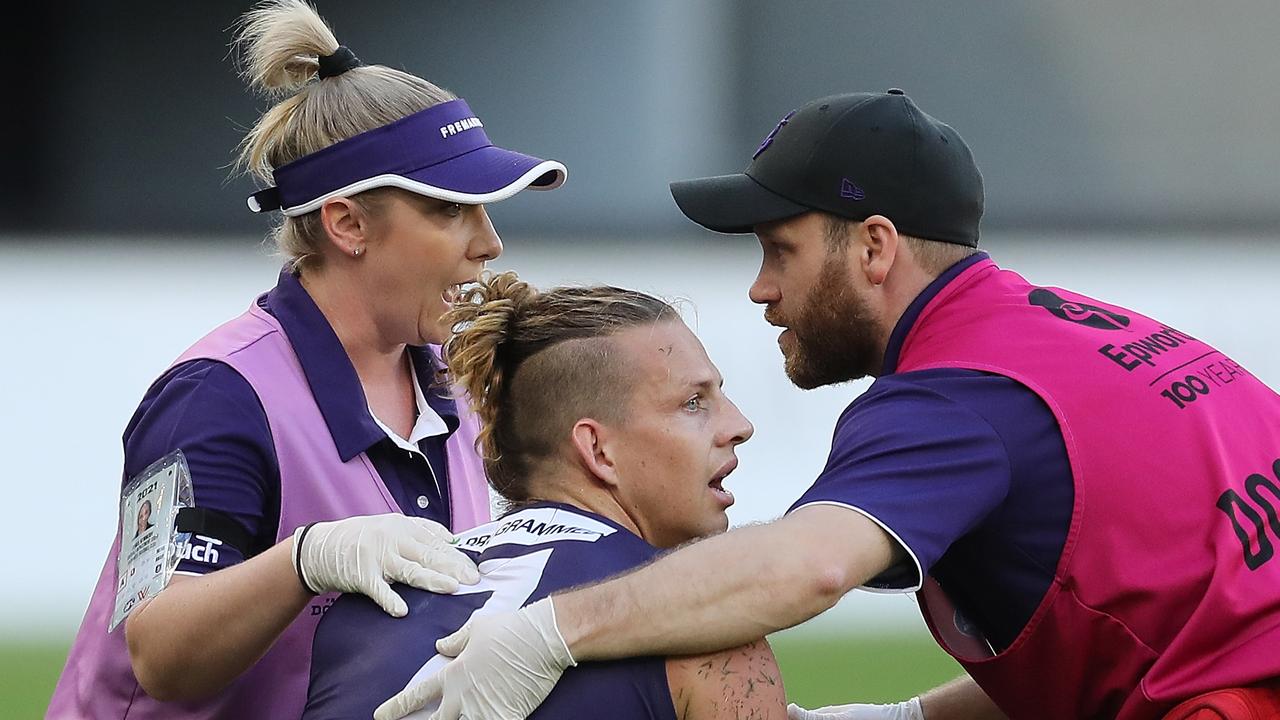 Fremantle Dockers captain Nat Fyfe was taken off the ground after suffering a nasty head knock during Sunday afternoon’s AFL match against the GWS Giants at Optus Stadium.

Late in the third quarter, Fyfe’s head collided with Giants defender Sam Reid while looking in another direction, and the midfielder briefly lay unconscious on the deck.

The 29-year-old was assisted by trainers for an extended period before he reluctantly exited the field.

Fyfe subsequently became the first AFL player to be replaced by a concussion substitute this year, with teammate Connor Blakely activated as his replacement.

The league’s newly-introduced concussion protocols require a mandatory 12-day period on the sidelines for players who demonstrate concussion symptoms.

Fyfe is therefore in doubt for Fremantle’s round three match against Carlton, scheduled for next Sunday afternoon.

Speaking to reporters after the victory, Dockers coach Justin Longmuir explained: “He’s good in the changerooms now — he’s up and about, he’s getting around his teammates.

“We subbed him out of the game. What that means for the next couple of weeks I’m not sure.

“We tread carefully with all concussions. He’ll need to tick every box medically like all of our players do.”

[email protected] captain Nat Fyfe has come from the ground after this head knock.#AFLFreoGiantspic.twitter.com/NXhb1hLz1j

Fyfe has had two serious concussions before this a decade apart including the Josh Battle head clash. Spoke last year of not even wanting to think of the ramifications for his head post-career. We need to protect the head. Players need a duty of care to unsuspecting opponents pic.twitter.com/SYVpdKHyNP

I love our Captain so thank god the concussion rule protects him from himself because he looks seriously pissed to be off. #[email protected]#foreverfreo#fyfe

Although Reid did not run at Fyfe, he could be sweating on the Match Review Officer’s verdict on the incident.

Former Bulldogs star Brad Johnson elaborated: “The discussion over the next day or so is going to be whether he bumped, or whether he braced.”

Australian comedian Dave Hughes tweeted: “This isn’t definite suspension. Giants player gets pushed Fyfe’s way. He does brace and Fyfe wasn’t aware, but Reid held his ground more than anything.”

Geelong premiership player Cameron Mooney said on Fox Footy’s Bounce: “For me, he’s bracing for contact. I think he’s standing his ground, he saw Fyfe coming in to his right and you’ve got to brace yourself and unfortunately Fyfe didn’t know he was there.”

Nat Fyfe of the Dockers.Source:Getty Images

The 2019 grand finalists are yet to record a victory this year, with three-time All-Australian Gerard Healy offering a stern warning to Leon Cameron’s side.

“It’s a belting the Giants can ill afford at the start of the year … it’s so early in the season, I don’t think you get a second mulligan,” Healy said on Fox Footy.

“This is on the line now, your season needs a solid performance, it needs four points to kick start it and they’re getting an absolute trouncing right now.

“Their work rate is nowhere near the level it needs to be.”