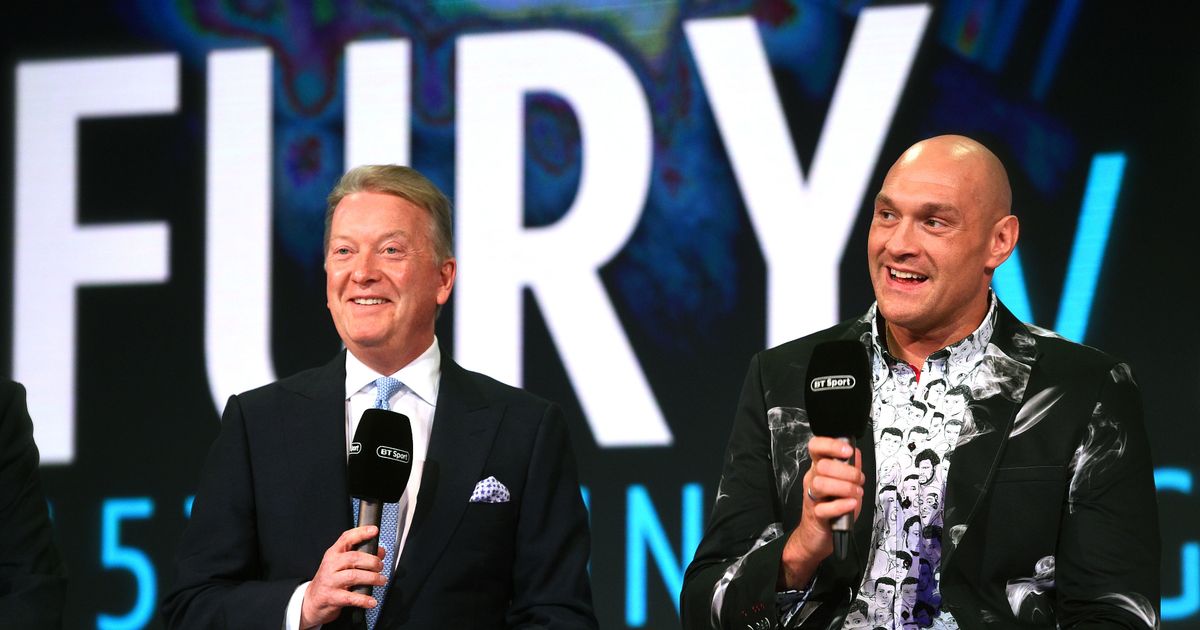 Frank Warren has hit back at Eddie Hearn as the fall out over Tyson Fury's clash with Anthony Joshua being cancelled continued.

And the Queensberry Promotions boss has claimed the all-British fight was heading for legal trouble even before Deontay Wilder won his arbitration.

Matchroom chief Hearn was pushing for a Saudi Arabia showdown for the undisputed heavyweight champion of the world.

But Wilder won an arbitration case last Monday to force a third fight with Fury to end any hope of a Joshua fight this summer.

Hearn claimed on Monday of this week that something “stinks” about the whole situation as all parties were ready to sign until the Wilder news was broken.

But Warren – Fury's UK promoter – has claimed Hearn's constant talking about the undisputed showdown being “100 per cent on” is inaccurate.

He said: “At the start of the year, all parties involved in the fight – fighters, promoters, managers – all signed a contract as to how the negotiations would take place.

“In that agreement there was a clause that made it very clear there was an arbitration situation going on as far as Tyson is concerned – so everyone was aware of it and that we were awaiting the outcome of that.

“There was another clause in there regarding confidentiality and that we would make announcements together, so that we would all be on the same page.

“Within a very short space of time, Eddie Hearn breached that agreement by making announcements.

“That was totally untrue. The fight wasn't done, it wasn't signed and every time I did an interview I just said the truth.

“All these announcements, that were being made on a regular basis by Hearn, I don't think helped and caused a lot of confusion.”

If Fury and Joshua ignored the ruling by the US judge then the Gypsy King would have faced a serious litigation row which could have cost millions.

Wilder was also not interested in taking a financial offer to step aside.

Warren has also claimed that even if Wilder lost the arbitration then those involved in making the Joshua fight would have ended up in legal trouble.

That's because he believes Usyk's team were ready to sue over his wait for a shot at the WBO title.

Warren added: “Usyk had written to the WBO – and subsequently all parties concerned – saying that they will be suing if the fight goes ahead.

“So that wasn't dealt with or brought to anybody's attention. Pot, kettle and all that from Hearn.

“One minute he is telling everybody I'm not involved at all in the negotiations – and now it is my fault.”

The American had the right to a third clash with Fury as per the contract for the February 2020 bout.

Fury bullied and battered Wilder until he stopped him in the seventh but the Bronze Bomber wanted his crack at redemption.

That looked gone when the Covid-19 pandemic hit and scuppered plans for a summer showdown in 2020.

Fury insisted he was moving on and his team were confident the contract had expired at the end of the year.

But Wilder's experienced manager Shelly Finkel didn't give in and helped launch the arbitration case.

Hearn and Finkel have history from negotiations to make Joshua against Wilder when the American was WBC champion and mocked the New York-based manager when talks collapsed.

Warren added: “Shelly Finkel and Al Haymon, who work with Wilder, were not interested in remuneration and said they wanted the fight.

“It probably didn't help, all the disparaging remarks over the last couple of years Eddie Hearn has made about Shelly and all the names he has called him.

“I'm sure he wasn't looking to do him a favour.”