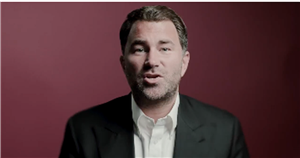 Eddie Hearn has confirmed Matchroom Boxing has signed an exclusive deal with streaming giant DAZN in the UK. The deal, which will last an initial five years, will begin following the conclusion of Matchroom’s decade-spanning partnership with Sky Sports at the end of this month.

The deal will start at the end of July, beginning with Matchroom’s ‘Fight Camp’, a series of three events set to take place at the former home of the Hearn family.

This will be followed by Josh Warrington’s rematch with Mauricio Lara, after the former’s stunning knockout loss to the Mexican earlier this year.

In a statement, Hearn outlined the reasons for his decision to leave Sky Sports and partner with DAZN, a switch that will undoubtedly have an enormous impact on the world of boxing.

“It’s a historic announcement. It’s a five-year deal for our UK events. For 25 years plus, we have been aligned with Sky Sports.

“This deal in our key market is something we are extremely proud of. It’s probably the most exciting move we have ever made as a business.

“Now we have the firepower and artillery to change the face of the sport here in the UK in terms of the fights we are making and the value we are offering.”

The deal, which is rumoured to be worth at least nine-figures over the course of the five-year deal, will give Matchroom the financial firepower to attack the US market aggressively, as well as promote UK-based fighters internationally.

Fighters like the previously Al Haymon-managed Keith Thurman, Shawn Porter and the outstanding Jermell Charlo are all in Matchroom’s sights already, while the likes of Conor Benn, Campbell Hatton and Joshua Buatsi will have the opportunity to shine in front of a global audience.

Hearn said: “To prise us away from a partner like Sky where we had a number of rounds of negotiations, it had to be a seismic deal.

“I felt that over the past few years with the inflation of purses, we have been more reliant on the pay-per-view model and the debate was always is a fight pay-per-view or not.

“What this allows us to do is sit those cards on regular fight nights on the DAZN platform.

“You can imagine the firepower needed to do that.”

With just one event remaining on the deal between Matchroom and Sky Sports, a super lightweight bout between Lewis Ritson and Jeremias Ponce, Sky Sports will soon have a boxing-shaped hole to fill. It is not yet clear whether they will look to partner with another promotional company, stage occasional one-off events or move away from boxing entirely.

It is also not yet clear what will happen to two of Matchroom’s biggest stars, Anthony Joshua and Dillian Whyte, who were both omitted from the Matchroom-DAZN deal for different reasons.

What do you think about Matchroom's new deal with DAZN. Let us know in the comments section below.

Whyte has, for the past few years, negotiated with Hearn on a fight-by-fight basis and so is able to sign with whichever organisation he wishes.

It is worth noting that DAZN does not yet offer a PPV platform, possibly reducing the earning potential of Joshua, Whyte and its other superstars. However, the streaming giant has been able to pay huge amounts in the past to stars of the sport, such as Canelo Alvarez and Gennady Golovkin, and so that is not expected to be a significant hurdle.

that Hearn's Matchroom Media arm will be responsible for all the production of shows in the UK, a prospect he is clearly ecstatic about.

“This is also an amazing opportunity for our newly-formed production and content business, Matchroom Media, who will now be responsible for all live production across our events in close collaboration with DAZN.

“This will enable us to create a cradle-to-grave mindset. From inception to completion, we will bring the live event experience in the narrative and style in which we built it.

“This deal enables us to build the dream team of talent. Across live programming to fight-week build-up to post-fight analysis.

“We will be bringing the best commentary, the best presentation and the best analytical talent to DAZN along with an exciting array of fresh faces.”

There will be an announcement next week on commentary teams and pundits for the expansion into the market on these shores.

Matchroom's deal will see 16 UK shows a year on the streaming channel as well as their events in the US, Spain and Italy.

The deal kicks off in late July with three shows at 'Fight Camp' back-to-back before Josh Warrington's rematch with Mauricio Lara on September 4 in Leeds.