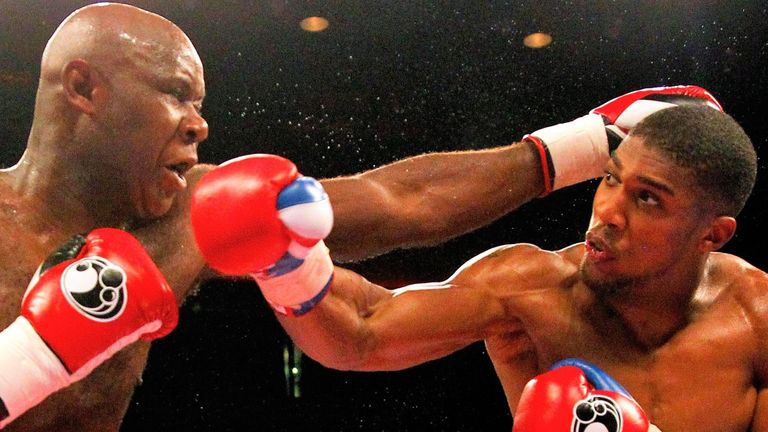 Matt Skelton tells Sky Sports about a late entry into boxing as the ‘Bedford Bear’, world title pain, and a surprising new profession after his final fight with Anthony Joshua.

In a long and distinguished career in combat sports, including boxing, Muay Thai and kick boxing, Skelton dished out plenty of damage to his rivals. But now the former British and European champion spends his days trying to help and heal people.

“Most of any kind of money I made in boxing, I put into property which I’ve made a decent living out of. But after about a year of being retired it became mundane,” Skelton told Sky Sports – six years since his last fight, a loss to the fast-rising Anthony Joshua.

“I started doing some charity work with British Servicemen and that led to an NVQ in Health and Social Care. We work with veterans of all ages. With a lot of the young guys, their problems are drug related. Some of the older guys went into the army to create the sense of family they were missing and then struggle when they’re out on their own.” 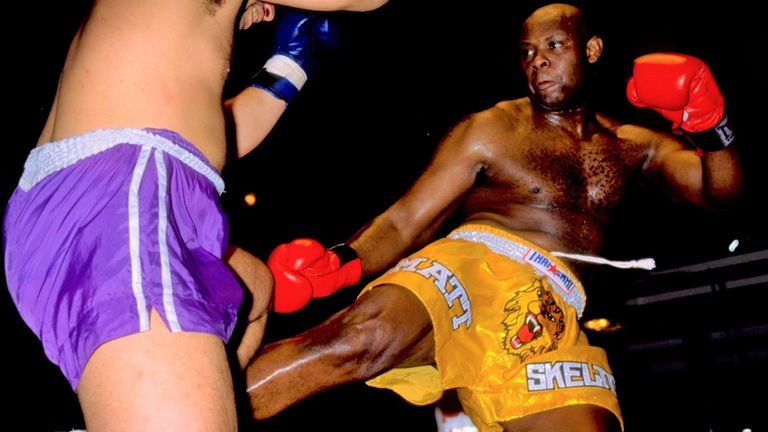 Skelton is now 53-years-old. He didn’t become a professional boxer until the age of 35, and he’s showing no signs of slowing down in his foray into philanthropy.

“I’m looking at doing some probation work. Guys come out and they’re not used to civvy life, they’re getting into trouble.”

He remains actively involved in grass roots boxing too.

“I’ve still got the little gym. Just a boxing gym and we’ve got a few light weights. We have an amateur club three days a week and then fitness classes.”

Skelton is still in good shape. He tries to run five miles every day, which has resulted in him being lighter than in his fighting pomp.

“I’m about 17 stone 2Ib, when I was boxing I was probably 17 stone 6 or 8. I’ve been lucky with my health. I listen to my body. If something hurts, I tend to rest or try an alternative. I go on a bike or a rowing machine. I watch what I eat more now than when I was fighting too.”

His achievements in becoming a domestic and European champion, and challenging for a world title in his 40s are especially impressive, given his late switch of combat codes. It begs the question, though: what would he have achieved had he boxed from his youth?

“No regrets. If I’d have come over earlier, I’d have been in the mix with greats like Mike Tyson. As for British fighters, Frank Bruno dominated the British public. He was so popular. And there was Lennox Lewis who was probably underrated even. I think the British public didn’t take to him because of his connections with Canada.”

That we saw Skelton in a boxing ring at all was more down to luck than design.

“Getting into boxing was purely accidental. I had 33 unbeaten fights in Muay Thai, but then lost. After losing I realised I was mainly sparring cruiserweights. I needed to find more heavyweights so I went to a boxing gym.

“I sparred with Matthew Ellis, a top 10 British fighter at the time, and his dad said, ‘Have you thought about pro boxing?’ I was then fortunate to get in with [promoter] Frank [now Kellie] Maloney and I fought for the English title in my eighth fight. My age was against me, I’d fight anyone.” 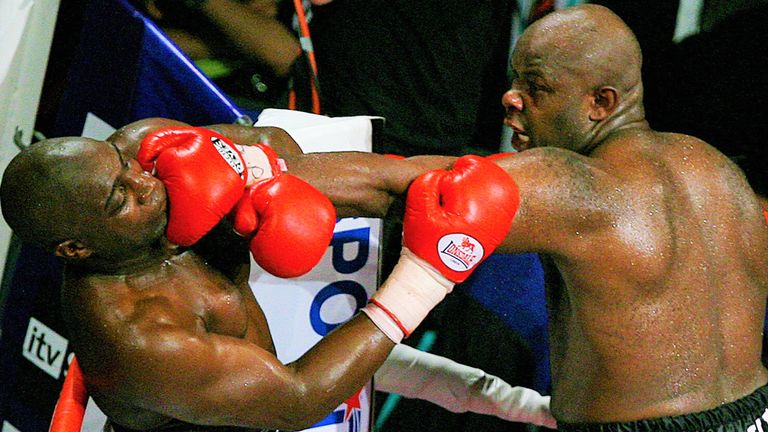 After defending his English title on points against an ageing Julius Francis in February 2004, he became British and Commonwealth Champion on April 24 2004 – 19 months on from his debut. And that final-round victory over Michael Sprott holds special satisfaction.

“I remember before the fight, people kept saying ‘You’re strong Matt, but I wouldn’t take this fight. Sprott’s got a good amateur pedigree.’

“And I remember after the eleventh round, as I sat on the stool, Maloney saying, ‘He’s going to nick it.’ But I said ‘I’m going to knock him out,’ as I could feel him weakening and that’s how it happened.”

Skelton won the European title against Paolo Vidoz in Milan in December 2008. By then he’d already challenged for the WBA world heavyweight title – in January of that year. His memories of the Ruslan Chagaev fight are clouded by a frustrating build-up, though. 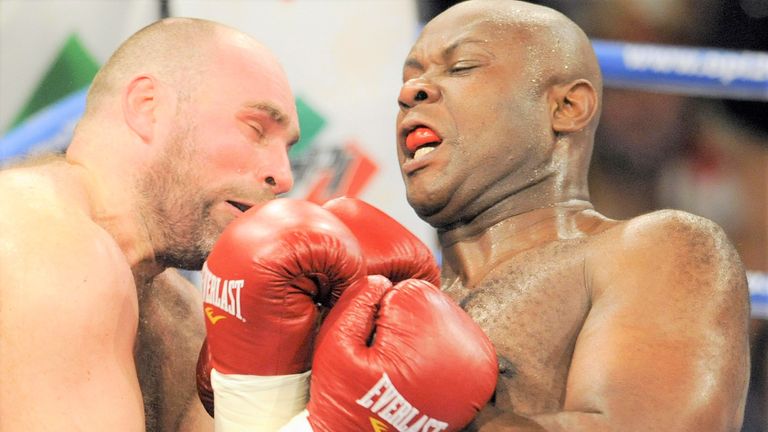 “It was a difficult camp. We couldn’t agree the purse. In the end Maloney said, ‘Just go out there (Germany)’. It wasn’t great money and no one thought we were going to win. Chagaev had an immediate rematch clause, even if we did.

“I felt I was doing well in the early rounds, but his experience came through and he was just doing enough to win rounds. I knew I’d lost the fight.”

Chagaev took a unanimous decision and Skelton reflects that at the highest level he lacked confidence, having fast-tracked his ring career.

“One hundred per cent, it would have been different if I had more experience. I didn’t have belief in my boxing ability. Some of my sparring – not blowing my own trumpet – was amazing, but in the ring I always went back to what I new best, slugging.”

“When I tried to throw a punch, my right leg would come off the canvas in preparation of a roundhouse kick. I’d always cross my feet and the trainers would say I wasn’t planting my feet and putting weight into my shots.

“I’d also crowd my work. I’d find myself up close, because in Muay Thai you’d throw elbows and knees from there. But in boxing you need distance.” 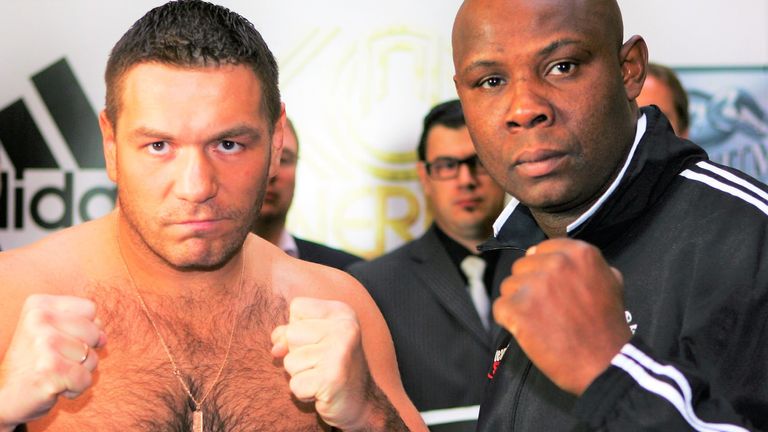 Skelton does not dwell on regrets, but he has following the rise of professional MMA with a sense of what could have been.

“I watch more UFC than ever. I look at these guys at the highest level and they always seem to concentrate on the ground work.

“I think people from a boxing background, who then learn Jiu Jitsu could do well. Aggressive fighters could do well. If I was 30 again, I’d want to be training and go into that.”

With his rare insight across the world of combat sports, Skelton understands why Dillian Whyte might be lured away from boxing to cross-discipline bouts with UFC star Francis Ngannou.

“I feel sorry for Dillian. There’s talk of him stepping aside to let Joshua fight Fury. But that means a year out of the game probably and that’s a long time in boxing.

Skelton also has respect and affection for Whyte’s rivals, including Joshua, who defended the wording of a speech he gave at a Black Lives Matter march.

“I’ve got so much admiration for him (Joshua). I sparred with him a couple of times after losing to him. He’s the poster boy for boxing. What boxing needs.

“I love what Deontay Wilder has been doing for a long time too. I love what he stands for in the Black Lives Matter Movement. The only thing is, he should have eaten humble pie after losing to Tyson Fury – like Joshua did when lost to Ruiz Jr.”

Welcome to Watford! We are uniting our community, sparking discussions about economic change and education! Supported by the local council and police, but inspired by the black lives matter movement ✊✊🏼✊🏽✊🏾✊🏿

Welcome to Watford! We are uniting our community, sparking discussions about economic change and education! Supported by the local council and police, but inspired by the black lives matter movement ✊✊🏼✊🏽✊🏾✊🏿

As a black man committed to helping others from all backgrounds in his community, Skelton has been encouraged by the Black Lives Matter movement, and believes it will lead to “change in the way people are treated”. But he’s convinced communication and empathy is the key.

“I want to sit down with a racist and say, ‘Why are you racist?’ It may be that he was beaten up by black lads when he was younger. But then I’d explain how I used to be attacked by white skinheads, and I’d ask, ‘So why aren’t I racist now?’

“It’s not about black and white races. It’s about one race, the human race. Everyone has to be vigilant. If I’m with other black men and they start saying things about white people, or Asian or Chinese people, I have to pick them up on it.”

Skelton says sport and boxing, in particular, can help society’s evolution towards equality. But he is cautions that sometimes bias and stereotyping can be found in the options presented to young people.

‘My teachers wouldn’t say to me, ‘Try out for the tennis team.’ They’d say ‘Why don’t you take part in athletics?’

“We do it (stereotype) without even thinking. You may see a big young black guy walking down the street and say, ‘You should try boxing.’ And he might say, ‘I don’t want to be a boxer, I want to be an accountant!’

“There’s nothing better than for people to sit down and talk, see what upsets people and what doesn’t,” Skelton reflected, before adding that he had to leave the conversation for his next community appointment.

Just one more thing before you go, Matt. Who wins when Joshua fights Tyson Fury? Perhaps predictably, Skelton, whose life is now about bringing people together, shies away from a divisive prediction.

“I love them both! It’d be sad to see a loser. Both are brilliant. You know what? It could be a draw! And that would set things up nicely.”

And with that, he signed off the phone call. 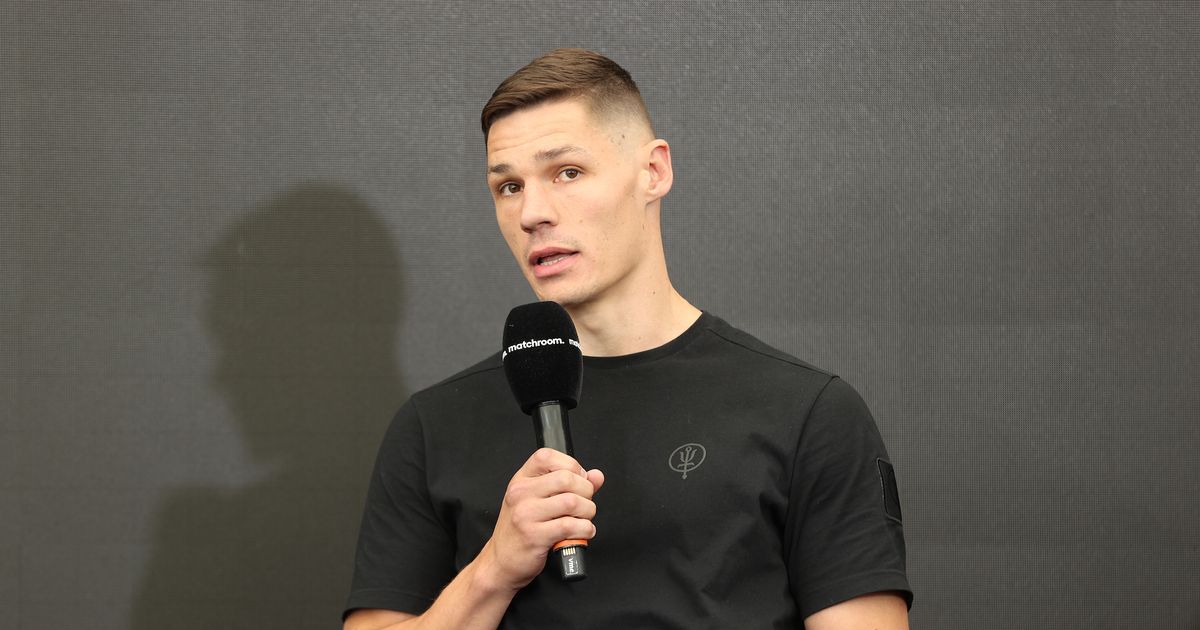 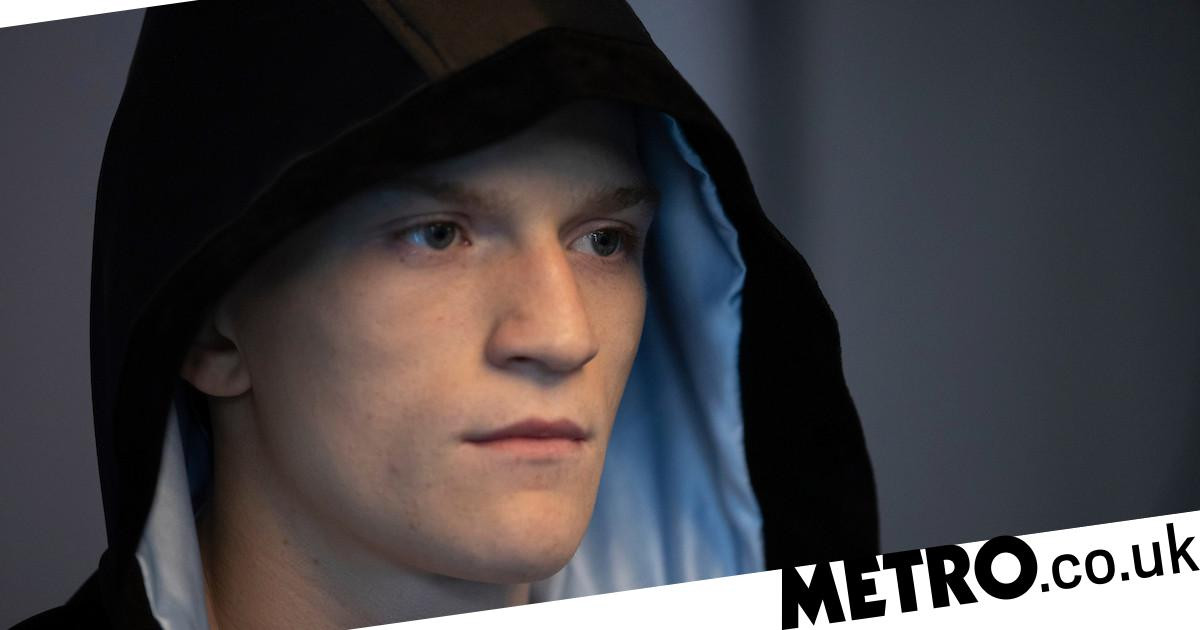 Ricky Hatton: Nerves for Campbell never go away but he's improving all the time 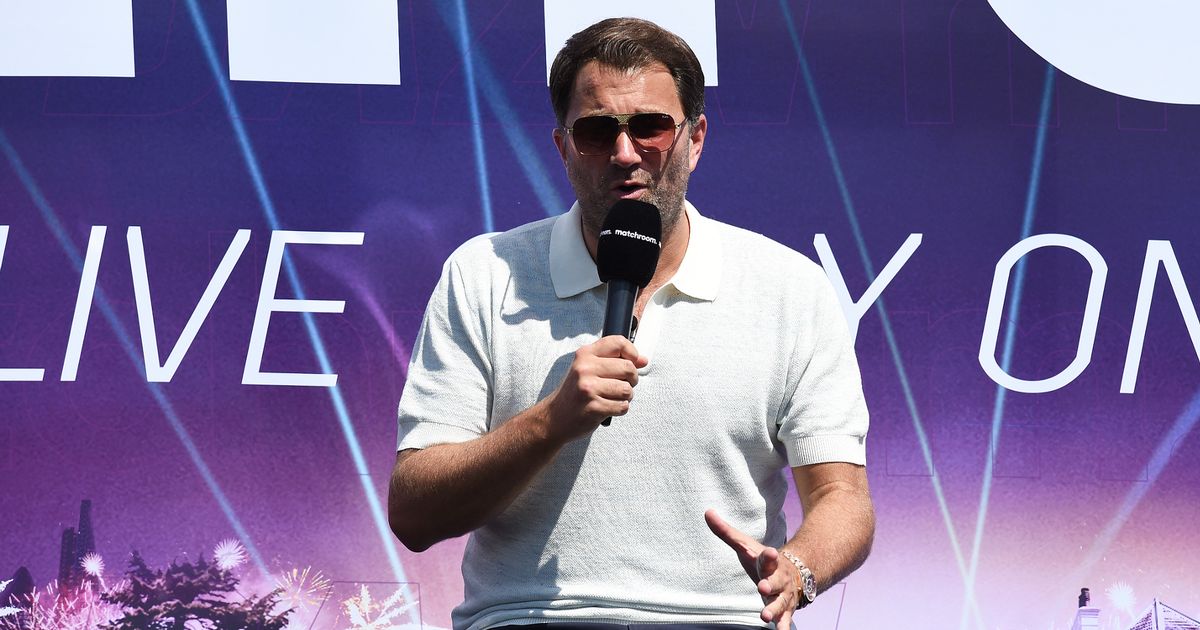