South East Melbourne Phoenix coach Simon Mitchell says his side took a step backwards on Sunday, but he sees a leap forward on the horizon.

The Phoenix fell 109-98 to the Illawarra Hawks in a foul-prone encounter at Lauren Jackson Sports Centre in Albury as Hawks import Josh Boone had 22 points, while NBA draft candidate LaMelo Ball scored 21 points and added three steals before fouling out. 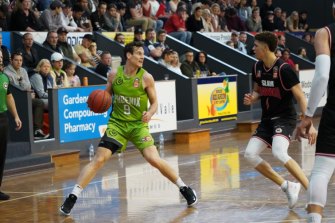 NBL pre-season games have a history of turning into foul-fests, and the Phoenix were on the wrong end of a 32-19 foul count which led to the Hawks shooting 32 of 40 from the free throw line.

The Phoenix players were clearly frustrated with some of the officiating, but they know they have to find a way to avoid fouls before the new season begins on October 3.

Mitchell said his side's transition defence and constant fouling were areas of concern, which was a disappointing follow up to their 93-80 win over Cairns last Sunday.

"We want to get better every day and I don't think we got any better today," Mitchell said.

"Our transition defence was poor. Some of that is predicated by poor offence, some of it from turnovers which has been a thing in our pre-season so far – Cairns profited off it, Illawarra profited off it so we need to rectify it.

"If you put a team at the line 40 times, you are basically giving them free points and a chance to set-up disruptive defences. So we have to be better."

Franchise player Mitch Creek will return to the side this week once he finishes his FIBA World Cup commitments with the Boomers, while veteran guard Adam Gibson has sat out recent games with calf soreness but should be fit for the NBL Blitz later this week.

"We have missed them over the last couple of weeks and our defence gets a lot sturdier with those two in the line-up,” Mitchell said.

Ball's highlights package picked up a lot of interest online after Sunday's game due to his large following in the US, and Mitchell said the teenage guard had a good day.

"Those floaters he started knocking down from the foul line were certainly a weapon and not something you see," Mitchell said.

"It was very effective. I don't think there was anything surprising in what he did.

"He had foul trouble too, and like all young kids in this league it will always come down to how things go for him at the defensive end this season."

What gives Mitchell confidence is he has four first-time NBL players on his roster plus Madgen returning from several years in Europe, so they will soon adjust to the referees.

Mitchell also praised import point guard Roberson for taking more of a leadership role in the side.

"He'll hold his own with anyone in the league," Mitchell said.

"I asked him to be a little more vocal and assert himself on that side of the game. He was more vocal in the huddles today and that's a good sign for us."

The NBL Blitz pre-season tournament starts in Tasmania on Thursday and runs until Sunday.