A "miscommunication" was behind incorrect claims that NBA draft candidate LaMelo Ball had taken ownership of NBL club Illawarra Hawks.

Long-time Illawarra businessman and team sponsor Tory Lavalle released a statement on Friday to Illawarra media saying that the way he has communicated developments to Ball's manager Jermaine Jackson led to the misunderstanding they had secured the franchise. 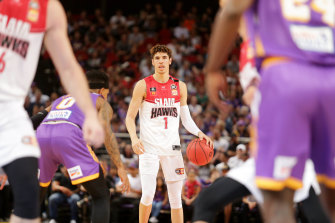 ‘Miscommunication’ led to the belief from LaMelo Ball’s manager that they had acquired the Illawarra Hawks.Credit:Chris Lane

Ball is tipped to be a top-five pick in the NBA draft later this year and has over five million followers on Instagram so is expected to enjoy a lucrative list of endorsements.

The NBL took back the Hawks licence from owner Simon Stratford on Friday night after the franchise went into voluntary administration and all staff were stood down.

NBL owner Larry Kestelman and the league will spend the next few weeks beginning the search for potential owners and are working with the Australian Basketball Players' Association on making sure all players receive their entitlements.

Lavalle said he, Jackson, and Ball were still keen to form a consortium and keep the Hawks in the Illawarra region but the NBL is understood to have had other parties express interest as well.

"For this, I unreservedly apologise to LaMelo and Jermaine.

"However, I can assure the Illawarra Hawks supporters and the general basketball community that a consortium involving myself, LaMelo Ball and Jermaine Jackson remain very interested in discussing future possibilities and opportunities to retain a team in the Illawarra.

"Those discussions are continuing.

"Our only interest and motivation is to ensure the long-term future of the Illawarra Hawks and for the team to be based right here in the Illawarra."