A superb three-point shooting display from the Melbourne Boomers handed them a 17-point win over Victorian rivals and title favourites the Southside Flyers in the WNBL on Saturday.

The Boomers trailed the Flyers by 13 points twice in the second term of the match but dragged themselves back into the contest to lead for the first time late in the third term, and then ran away with the game in the final quarter, winning 89 -72.

That final quarter began as a battle between Liz Cambage hitting two-point shots and the Boomers responding with three-point buckets from seemingly everywhere. 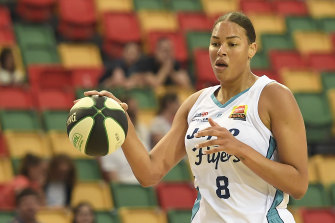 Cambage's quick pair of baskets were answered by a Cayla George three-point shot, with Cambage's next two baskets (and a free throw one-pointer) instantly cancelled out by two more Tess Madgen three-pointers.

This stanza extended the Boomers' three-quarter time lead of seven points to nine points before a time out. It reached 10 points when Ashleigh Karaitiana shot her fifth three-pointer midway through the term.

The Boomers seemed to benefit in this match from familiarity given the bulk of their squad was together last season, while the return of Karaitiana from having a baby and the shooting from Madgen and George was unstoppable.

The Kiwi international Karaitiana ended with 18-points and six from eight from the three-point line in her first WNBL game since 2018. 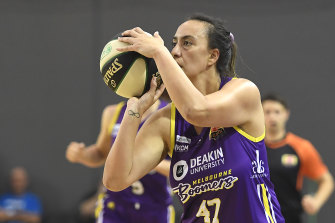 Ashleigh Karaitiana of the Boomers was a force to be reckoned with. Credit:Ian Hitchcock

Melbourne ended with a huge 59 per cent shooting average from beyond the three-point line, hitting 16 from 27 shots.

The Boomers remain undefeated at 2-0 to start the season while the Flyers drop back to 1-1 after the upset blow-out.

For the Flyers, Cambage dominated with 24 points and 19 rebounds, while Rebecca Cole hit 13 points and three assists.

Some 22 of George's 24 points came after quarter time, while Madgen scored 24 along with nine rebounds. 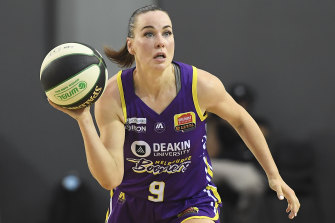 "I definitely found some confidence today. When you're confident it is easy to hit those shots and take some risky shots," George said after the game. "Happy with that but obviously happier with the win.

"With the season how it is it will come down to talent and how well we recover."

Dolphins HC Brian Flores: 'We have a lot of confidence' in Tua Tagovailoa despite benching