NBA champions Golden State have apologised to Toronto Raptors guard Kyle Lowry after he was shoved by Warriors minority owner Mark Stevens during Game Three of the Finals in Oakland on Wednesday (Thursday AEST).

Lowry tumbled into the front row of the crowd while diving for a loose ball and Stevens used one hand to push Lowry as he was getting up. 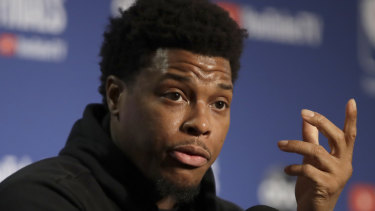 After the game Lowry said Stevens also "said a couple vulgar words" to him.

Stevens was later escorted out of the game and Lowry called for him to be banned from all future NBA games.

"Mr. Stevens' behaviour last night did not reflect the high standards that we hope to exemplify as an organisation," the Warriors said in a statement.

"We're extremely disappointed in his actions and, along with Mr. Stevens, offer our sincere apology to Kyle Lowry and the Toronto Raptors organisation for this unfortunate misconduct.

"There is no place for such interaction between fans – or anyone – and players at an NBA game."

The 60-year-old Stevens, who joined the Warriors' ownership team in 2013, is a venture capitalist who was a partner with Sequoia Capital until 2012 and is now a managing partner of S-Cubed Capital.

The team said Stevens will not be attending any of the remaining games of the NBA Finals and a review of the matter is ongoing.

Lakers forward LeBron James took to Instagram to call for the league to take swift action against Stevens.

"There's absolutely no place in our BEAUTIFUL game for that AT ALL," James said. "He himself being a fan but more importantly PART-OWNER of the Warriors knew exactly what he was doing which was so uncalled for."

James ended his lengthy post with the hashtags #ProtectThePlayers and #PrivilegeAintWelcomeHere.

The NBA released a statement saying Stevens will not be allowed to attend NBA games while the league reviews the matter.

"A team representative must be held to the highest possible standard and the conduct of Golden State Warriors investor Mark Stevens last night was beyond unacceptable and has no place in our league," NBA executive vice president Mike Bass said.

Game Four will be held in Oakland on Friday (Saturday AEST), with the Raptors leading the best-of-seven series 2-1.