LaMelo Ball is still learning to play "organised basketball" but otherwise the Illawarra Hawks are poised to jump on his back and see where the rising teenage star takes them this NBL season.

Ball is emerging as the league's biggest attraction, even though he's playing for the bottom-placed Hawks. 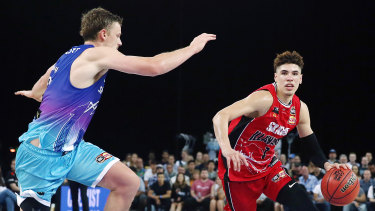 LaMelo Ball drives against Finn Delany of the Breakers at Spark Arena in Auckland.Credit:Getty

The 18-year-old from California became the first player to snag back-to-back NBL triple-doubles for 14 years when his team went down 91-79 to the New Zealand Breakers on Saturday.

His 25-point haul was short of the 32-point display against Cairns five days earlier but was no less spectacular and attracted over 10 million combined views on social media.

And he did it in front of a hoard of scouts who reportedly regard Ball as their top choice for next year's NBA draft.

Illawarra coach Matt Flinn said coaching Ball has been an invigorating experience through 12 games and he's expecting the highlight reels to keep being filled.

However, he also anticipates the fleet-footed guard will continue to evolve as a team player, with some shortcomings exposed at times in Auckland.

"There were times when the ball sort of stuck a little bit and we didn't get it through hands," Flinn told reporters.

"That's a learning curve for him, playing so many minutes and having the ball in his hands so much. 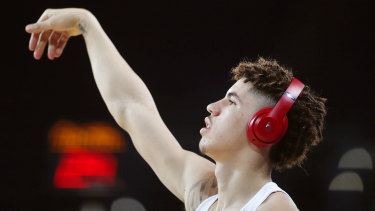 Ball is a special talent already lighting up the NBL.Credit:Getty

"It's learning to play with that tempo and getting other people involved.

"From where he's come from, to where he is now, it's night and day.

"It's exciting to be part of."

Flinn said Ball didn't have an ego and was a pleasure to coach.

While Ball's relentless energy had been present from his arrival, he was soaking up new tactical methods every week.

"He's still learning organised basketball. He still has moments in the game, which is like any young kid, he's only 18 years old," Andersen said.

"I try to give him some guidance where I can and steady his head when the moments get a bit tough, with a little bit of encouragement.

"He's trying to get to the NBA obviously, which is a big thing for him, but for now it's about ticking boxes and making sure he progresses as a body, as an athlete, and keeps his head right."