Australian big man Jonah Bolden made the most of his first day with the undermanned Phoenix Suns, playing 26 minutes and helping his new club to a 112-106 win over the Golden State Warriors in Phoenix on Thursday (AEDT).

Bolden, the son of long-time NBL star Bruce Bolden, scored six points, grabbed seven rebounds and blocked two shots while the Suns were plus-17 points during his minutes in a memorable club debut. 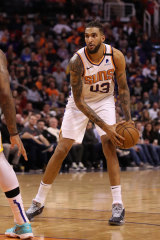 Bolden was waived by the Philadelphia 76ers last week after a season-and-a-half at the club.

The Suns signed him to a 10-day contract on Thursday and he was immediately thrown into action as big men Aron Baynes, Dario Saric and Deandre Ayton were out due to injury or illness, leaving Bolden to play minutes at power forward and centre.

"I was fresh off the plane just hours ago so I was calibrating to how we as a team play and how guys personally play," Bolden said.

"I thought it would move a lot faster but it didn't and that's tribute to our players and coaching staff. They took a lot off my shoulders and let me go out and play."

The Suns don't play again until after the NBA All-Star break but Bolden will be with the team for the visits to Toronto next Friday (AEDT) and Chicago next Saturday (AEDT).

Bolden had only seen the court in four games for the Sixers this season and played just 15 minutes in total after falling down the pecking order, but his performance showed he still has something to offer at NBA level.

The 24-year-old will hope to earn a second 10-day contract and possibly a rest-of-season deal as he looks a good fit with the team.

"I can't remember the last time I played that many minutes and got to contribute positively to a win like that," Bolden said.

"It was definitely fun and us getting a win helps." 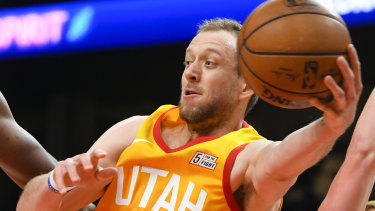 The Jazz will enter the All-Star break with a 36-18 win-loss record, sitting in fourth place in the western conference.

Portland Trail Blazers star Damian Lillard injured his groin against the Memphis Grizzlies in a 111-104 loss, which could force him out of the NBA All-Star game.

LA Lakers superstar LeBron James put together a triple-double with 32 points, 12 rebounds and 14 assists as his club beat the Nuggets 120-116 in Denver. The Lakers have a three-game lead over the Nuggets at the top of the western conference.

Nikola Vucevic hit the go-ahead shot in overtime as the Orlando Magic held off Detroit 116-112, with Australia's Thon Maker notching a season-high 18 points for the Pistons.

A trio of double-doubles to Tristan Thompson, Andre Drummond and Larry Nance Jr enabled the Cleveland Cavaliers to end a six-game losing streak with a 127-105 win over the Atlanta Hawks.

Devonte' Graham pumped in 28 points, and Malik Monk came off the bench for 25 points as the Charlotte Hornets recovered from an 18-point first-half deficit to defeat the Minnesota Timberwolves 115-108.

Bradley Beal scored 10 of his game-high 30 points in the fourth quarter as the Washington Wizards pulled away from the New York Knicks 114-96.

In other games the Brooklyn Nets beat the Toronto Raptors 101-91 and the Indiana Pacers took advantage of new father Giannis Antetokounmpo's absence to snap a season-high, six-game losing streak with a 118-111 victory over the Milwaukee, delivering the league-leading Bucks just their eighth loss of the season in the process.

The reigning NBA MVP sat out his second consecutive contest following the birth of his first child, Liam Charles.