Australia have recorded their first win of basketball's 2021 Asia Cup qualifying series with a crushing 115-52 victory over Hong Kong.

The Boomers bounced back from Thursday's loss to New Zealand to cruise past the 106th-ranked visitors in Brisbane, with exciting prospect Josh Giddey making his first appearance for the national side. 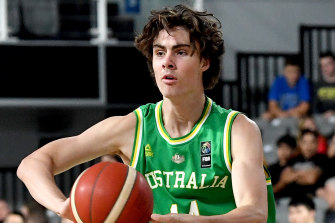 Josh Giddey made his debut for the Boomers against Hong Kong.Credit:Getty Images

The son of 449-game NBL veteran Warrick Giddey became the youngest Boomer since Ben Simmons debuted in 2013, the 17-year-old adding 11 points, six assists and three rebounds in 11 minutes on court.

The Boomers led by six after a lacklustre first quarter but took control in the second with a 19-2 run to take a 23-point advantage into half-time before outclassing Hong Kong in the second half.

Australia's ball control and outside shooting proved too much for their opposition, the Boomers connecting on 20 of 37 three-pointers while winning the assists 30-11.

Cam Gliddon hit six three-pointers as he paced the Boomers with 21 points while Dan Grida and Angus Glover each finished with 16.

"It felt good, the guys played really hard and I think we played the right way," Gliddon said.

"I think we got up pretty big early but we continued to play the Boomers basketball that we know and everybody has done us proud."

Kyle Adnam made five of his seven shots, including a perfect three-for-three from long distance, to tally 14 while Nathan Sobey (10) made it six Boomers to reach double figures.

Giddey became the sixth debutant for the Boomers in this round of qualifiers when he started the second quarter, the 200cm guard showing off his passing ability as Australia's attack clicked into gear.

Gliddon felt Australia's newest recruit was not out of place on the international stage.

"He's a tall body, he can really move and he's a confident kid," he said.

"He knew he was playing this game and he came out and did some great things so just a real bright future ahead for him and hopefully he enjoyed it."

The next round of qualifiers will take place in November with Australia facing away clashes against Guam and New Zealand.