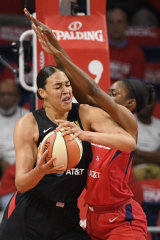 Liz Cambage's Las Vegas Aces have let slip the chance to take a 1-0 series lead in their WNBA semi-final series against Washington Mystics, going down 97-95.

Australian star Cambage had 19 points and 12 rebounds as the fourth seeded Aces threatened to claw back a 13-point deficit in the final quarter of their road opener on Wednesday (AEST).

A'ja Wilson scored 23 points for Las Vegas, who twice got the deficit as close as two points in the final moments, while Kayla McBride added 19 points.

Emma Meesseman had a career post-season high 27 points for the top-seeded Mystics but it was a crucial turnaround jumper late in the game from star Elena Delle Donne (24 points) that proved decisive.

The series opener marked the Aces' first game in a WNBA semi-final series since 2008, when the team was located in San Antonio.

Game two of the best-of-five series is Thursday in Washington.

Meanwhile, Alyssa Thomas had 22 points and grabbed 10 rebounds to lead second-seeded Connecticut Sun to an 84-75 win over Los Angeles Sparks in the opening game of their semi-final series.