New Zealand Breakers have terminated the contract of Glen Rice Jr. after the American breached his bail conditions, ending a brief and tumultuous stint in the NBL.

A club statement read the former NBA guard was picked up by police on Sunday night and he made an appearance in the Auckland District Court on Monday morning.

Rice Jr., who has played three games for the Kiwi club, is facing an assault charge but had been given a second chance to prove himself by Breakers management. 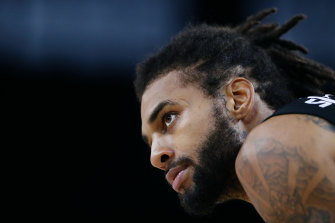 The 28 year old's latest indiscretion was the final straw, ending a month-long tenure that had been highly-promising on the court but a disaster off it.

The son of a former NBA star, Rice Jr. arrived at the Breakers on November 5 as an injury replacement for fellow-import Scotty Hopson.

The recruitment was criticised due to his troubled past, which included brushes with the law in the United States and clashes with teammates at more than one of his former clubs.

Two games into his NBL stint, Rice Jr. was arrested after a late-night incident and appeared in court charged with assault with intent to injure.

The former Washington Wizards player pleaded not guilty and is due to reappear in February.

Rice Jr. was suspended indefinitely but last Friday was dramatically restored to the Breakers' roster for that night's game against the Taipans in Cairns, after a Basketball Australia integrity unit investigation found he had no further case to answer.

The player's unquestioned ability was on show as he delivered a game-high 30 points, 11 rebounds and eight assists.

The bail breach occurred two days later and he has been bailed again to reappear in court on his original hearing date of February 10.

The Breakers statement reiterated the promise of owner Matt Walsh, who has previously said they will help Rice deal with his personal issues and also help him through the legal process.

"The club will continue to assist Mr Rice with his personal struggles until he is freely able to return home to his family in the United States," the statement read.

Rice departs the NBL averaging 25 points per game, with one of the three he played cut short because of injury.