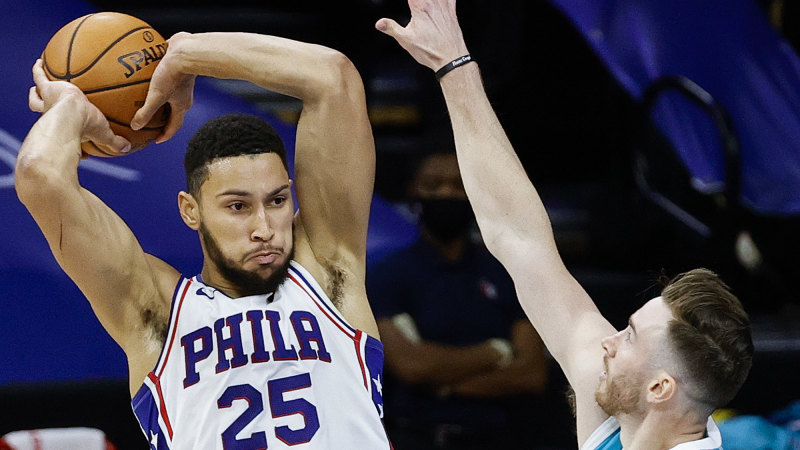 As the Philadelphia 76ers and Washington Wizards traded hoops in a frenzied NBA contest on Thursday, the only thing more emotionally draining than watching the game was watching Sixers fans wrestle with the merits of Ben Simmons in real time on social media feeds.

The Australian point guard was in the midst of turning in a 17-point, 12-assist double-double as his Sixers stumbled then found their feet to hold off the Wizards and the white-hot Bradley Beal, who dined out with a 60-point night only to see his side go down 141-136. 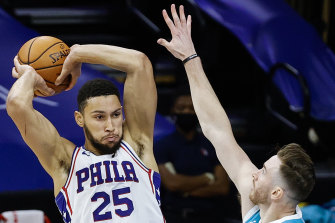 Ben Simmons has continued to help the 76ers’ full-court press with Philadelphia out to a 7-1 start to the NBA regular season.Credit:Getty

And those who spend their time deep-diving into the Sixers have already liked what they have seen so far from Simmons in the new system, praising his intentions in offence and desire to get his hands on the ball in close contests, even if there remains some frustration about his finishing near the hoop.

"Ben Simmons is playing at a high rate. His scoring is down but he doesn't need to score as much because the supporting cast is better," says Marc Narducci, who covers the Sixers for the Philadelphia Inquirer.

"He is not playing much different with Doc Rivers but the system is different and it is giving him more room to operate. He has been driving to the basket and one area of his game that needs improvement is finishing around the rim … he misses a lot of driving lay-ups.

"Defensively he has been as good if not better than last year. At 6-10, he has the versatility to cover any position. He has covered quick guards such as Russell Westbrook, and Markelle Fultz, good shooting swingmen like Gordon Hayward, versatile swingmen such as RJ Barrett and power forwards such as Pascal Siakam.

"Most of all, due to better spacing, he is playing much better with fellow All-Star Joel Embiid."

Even so, the drums just keep beating about Simmons and whether his long-term future lies in the City of Brotherly Love. Just a day after the Wizards win, a local sports radio station featured an 'NBA scout' who criticised Simmons' work ethic and desire to improve.

Narducci has heard it all before but doesn't believe Simmons is going anywhere. But he said Simmons does tend to polarise the fanbase, with the lines clearly drawn as to whether Simmons is the Chosen One or a player with a ceiling who is missing basic offensive tools.

"He has been the subject of trade rumours for James Harden, even though Sixers president of basketball operations Daryl Morey has said he isn't trading Simmons," Narducci said.

"There is no middle ground concerning whether the Sixers should trade him. Many fans want to see Harden in Philadelphia and see Harden as that one missing shooting piece.

"The pro-Simmons crowd mentions how he is seven years younger, a dominant defensive player, somebody who is unselfish who his teammates love playing with. I am of this group and would never trade Simmons and a package of players and draft picks for Harden.

"Simmons will always have his critics because of his reluctance to shoot. So far, it hasn't been a hindrance because the Sixers have other shooters. In his first eight games, he attempted 78 field goals and only five have been further than 10 feet.

"I think the shooting is what may keep him out of being a top-10 NBA player but he is so dynamic, that he still has a chance to reach that level. Last year, he was third-team all-NBA. There is nothing surprising with Ben … he is just playing at the high level that is expected."