Caster Semenya is taking her legal battle against rules to limit female runners' testosterone levels to the European Court of Human Rights, her lawyers have confirmed.

The move was announced just over two months after Switzerland’s supreme court said its judges had dismissed Semenya’s appeal against a Court of Arbitration for Sport verdict last year that upheld the rules drafted by World Athletics affecting female runners with differences of sex development. 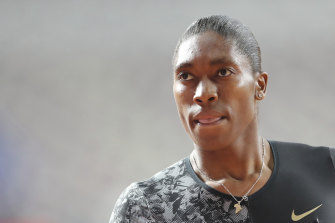 South Africa’s Caster Semenya has won gold in the 800 metres at the past two Olympic Games.Credit:AP

"We will be taking World Athletics to the European Court of Human Rights," said Semenya's lawyer, Greg Nott.

"We remain hopeful that World Athletics will see the error it has made and reverse the prohibitive rules which restrict Ms Semenya from competing."

World Athletics said in response: "For many years World Athletics has fought for and defended equal rights and opportunities for all women and girls in our sport today and in the future.

"Throughout this long battle, World Athletics has always maintained that its regulations are lawful and legitimate, and that they represent a reasonable, necessary and proportionate means of ensuring the rights of all female athletes to participate on fair and equal terms."

September's ruling by the Swiss court prevents Semenya defending her Olympic 800 metres title at the Tokyo Games next year unless she agrees to lower her testosterone level through medication or surgery – something she has repeatedly refused to do.