Four-time Olympic gold medallist Mo Farah said he would gladly have any of his previous blood or urine samples re-tested as part of the World Anti-Doping Agency's (WADA) investigation into the Nike Oregon Project.

WADA wants to investigate all athletes who trained with banned coach Alberto Salazar at the Oregon Project, one of which was Britain's Farah, the 5000m and 10,000m champion at both the London 2012 and Rio de Janeiro 2016 Games. 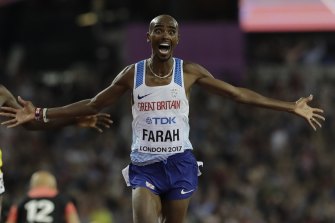 "I've seen reports of my name in connection to UKAD (UK Anti-Doping) and WADA about sample retesting," Farah said in a post on Twitter.

"Just to be clear, I was not consulted about this and as I've said many times, I am happy for any anti-doping body to test any of my previous samples any time."

Farah's comments come after UKAD was criticised for saying it would need "credible evidence" that a sample given by a British athlete contained a banned substance before handing it over as part of an investigation.

UKAD, which says it has worked closely with its American counterparts, declined a request for Farah's historic samples from USADA in 2017, saying it was concerned such samples can degrade if retested or sent to a different location.

Salazar stopped coaching Farah in 2017 when the runner decided to move back to England from the United States.

Farah said at the time that the doping investigation surrounding Salazar was not the reason they parted ways. He has never failed an anti-doping test and denies any wrongdoing.

Earlier this month he said he would have been the "first one out" had he known Salazar faced a ban for doping violations.

He will return to track action this year to defend his Olympic 10,000m title at the Tokyo Games.

Salazar, who was found guilty of doping violations by United States Anti-Doping Agency (USADA), has denied wrongdoing and has appealed to the Court of Arbitration for Sport (CAS) against his four-year ban.

The gift that keeps on giving: Stawell Gift secure until 2023 at least