When proud Kamilaroi woman and Sydney Thunder all-rounder Hannah Darlington walks onto a cricket field, barefoot, ready to take part in a special ceremony known as the barefoot circle before a match, it’s nothing but pride she feels.

At the start of Women’s Big Bash League’s 2020 season – held entirely in Sydney because of the COVID-19 pandemic – the teams joined together in barefoot circles to acknowledge Australia’s proud Aboriginal cultures.

This weekend, players and staff will again stand in the symbolic circles in celebration of NAIDOC Week.

Watch every ODI, T20 & Test Match of India’s tour of Australia LIVE with no ad-breaks during play on Kayo. New to Kayo? Get your free trial now & start streaming instantly >

“It’s a really special moment to be able to stand there with non-Indigenous and Indigenous people, together as one in that circle,” Darlington said. 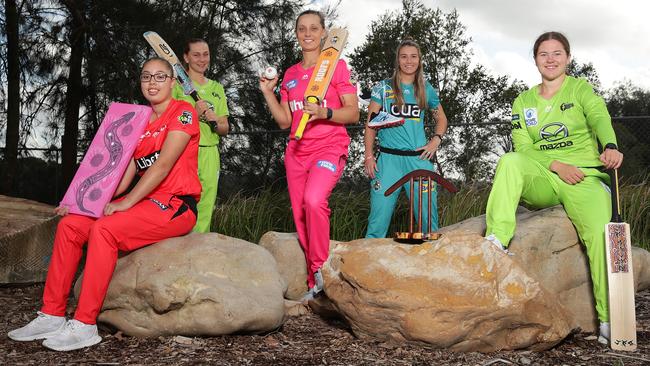 WBBL will mark NAIDOC week at all matches this weekend.Source:Supplied

“As soon as you take your shoes off, you know you’re connecting to country and when people do the Acknowledgment to Country, I get goosebumps because it’s the feeling of really walking on to sacred land and being able to acknowledge those who were there before you.”

Three years ago, there were only two Aboriginal women taking to the field in the WBBL: Australia’s and Sydney Sixers all-rounder Ash Gardner and Mikayla Hinkley (then at the Perth Scorchers, now at Brisbane Heat).

Fast forward to 2020 and this season there are five Indigenous women playing across four teams and this is something that makes Darlington really proud, too.

“Looking at how far we’ve come … it all started with just Ash really and now there are five players, so looking at that growth is really showing that what we are doing (to encourage more Indigenous girls into the game) is working,” she said.

Batting stars reveal the scariest spells they ever faced

Why Warner holds the key to Pucovski’s debut hopes

How India’s quicks are built to take down Aussies

Other ways the WBBL teams are celebrating NAIDOC Week include a special First Nations Festival of Cricket on November 14 and 15, which will see the Melbourne Renegades, Perth Scorchers and Sydney Thunder wear Indigenous-designed game day shirts, and there will be “Walkabout Wickets” artwork featured on match balls.

Many teams have already been taking a knee before games – and will continue to do so this weekend – in a stand against all forms of racism and bigotry.

Head of the Big Bash League, Alistair Dobson, said it was important for the League to continue to provide forums and opportunities to celebrate culture and make a commitment to reconciliation.

‘It’s unbelievable’: Melbourne Stars off to their first WBBL final in six-year history

WBBL: Melbourne Stars storm into final after Alana King has Perth Scorchers in a spin

Sergio Aguero wife: Who is Giannina Maradona? Meet the mother of Aguero’s son