Manchester: A magnificent stand of 212 between Alex Carey and Glenn Maxwell has piloted Australia to a thrilling three-wicket victory in the final one-day international, both men completing centuries to defeat England in a series in England for the first time in five years in this format.

There was a late wobble as the century-makers fell in the 48th and 49th overs to leave Mitchell Starc and Pat Cummins 10 runs to make from the final over. But the left-hander made short work of that, hitting Adil Rashid back over his head for six then sweeping him for four, the finish line reached with two balls to spare to complete the tour in brilliant style. 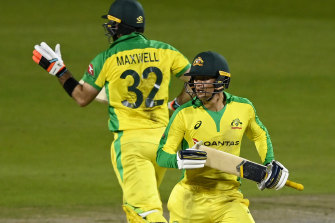 Carey and Maxwell piled on the runs.Credit:Getty Images

Maxwell and Carey came together at 5-73 in the 17th over with Australia in serious strife, but the hosts had no answer to the combination's calculated hitting and dedicated accumulation until Maxwell top-edged Rashid with 18 runs to get from 15 balls. When Carey steered Jofra Archer to Mark Wood from the final ball of the penultimate over, it was game on once again. But Starc held his nerve, appropriately so after taking wickets from the first two balls of the match some eight hours earlier. The response on the balcony said it all – this meant a lot.

It was a landmark night for Carey, this his first international century and the first for an Australian wicketkeeper in an ODI since 2010, making 106 from 114 balls. For Maxwell, the man of the match, it was the sixth time he’s registered three figures and the second in this format, his joyous hand of 108 coming from just 90 balls, including seven towering sixes.

Both men benefited from a touch of luck, Carey recalled after deflecting a catch to third man on nine – Archer retrospectively shown to have overstepped – before Maxwell was put down twice by Jos Buttler; tough chances both. But that did not detract from the achievement across 184 balls together, the highest-ever sixth-wicket union in an ODI chase. 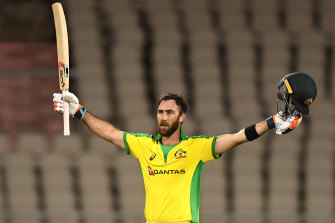 That England still made it to 7-302 after spectacularly losing Jason Roy and Joe Root from the first two balls of the afternoon – Starc prompting a sliced drive to Maxwell to begin the afternoon, then the latter with a perfect inswinger – was principally down to Jonny Bairstow. The opener led the recovery effort before going on to lodge his 10th ODI ton, eventually out for 112 in the 41st over. He was supported by Sam Billings (57) through the middle overs before Chris Woakes whacked 53 not out from 39 balls with 84 added in the final 10.

In reply, Australia were nowhere early on with Aaron Finch trapped leg before by Woakes on 12 then Marcus Stoinis (6) chipping a catch to midwicket off the same bowler. What followed was a masterstroke from Eoin Morgan, bringing Joe Root into the attack for some part-time off-spin that was good enough to bowl David Warner (24) then to earn Mitch Marsh’s inside edge (2). By the time Sam Billings ran out Marnus Labuschagne from backward point (20), all signs pointed towards England making it 14 series wins in the trot in 50-over cricket.

But it didn’t take long after Maxwell walked in at number seven for the atmosphere to change, flicking Archer over square leg for six from the third ball he faced. Routinely taking on the short boundary to the eastern side of the ground, popping the dangerous Rashid into the stands in that direction four times – including once onto the balcony of the hospitality building – was enough to get England’s primary spinner dragged from the attack.

Ultimately, it was his unexpected return to the attack in the 48th over that was Maxwell’s undoing moments after both men had posted three figures – the right-hander in 85 balls and the southpaw in 106. However, the call to keep him on for the 50th was also defining, allowing Starc to hit hard with the spin the deliver the prized result to Finch’s team.