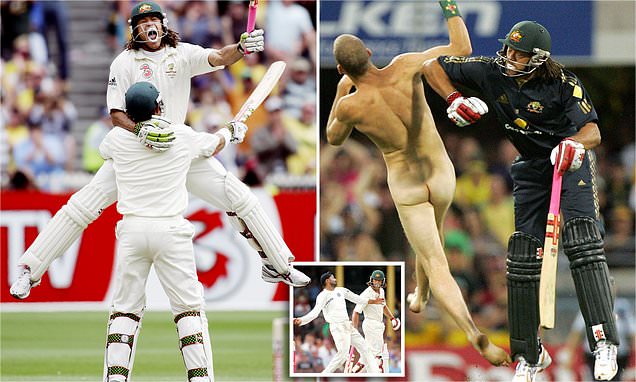 Never a dull day in a life cut tragically short: The greatest and most controversial moments of Andrew Symonds’ stellar cricket career – from smashing a streaker to smashing the century that stopped the nation

Australian cricket lost one of its most lovable and talented stars when Andrew Symonds died in a car accident on Saturday night, robbing the game and the nation of a man who was a lightning rod for the spectacular and the controversial during his 26-Test career.

From the moment he debuted on the world stage in 1995, the hard-hitting all-rounder stamped himself as the sort of cricketer you could never take your eyes off. At any moment he could hit a monster six, take a pivotal wicket – or, in one famous incident, deck a streaker with a shoulder charge a footy player would be proud of.

As fans mourn his tragic passing, one image that’s sure to crop up time and time again is the dreadlocked star leaping into teammate Matthew Hayden’s arms after scoring his first Test century during the 2006 Ashes Boxing Day match at the MCG. 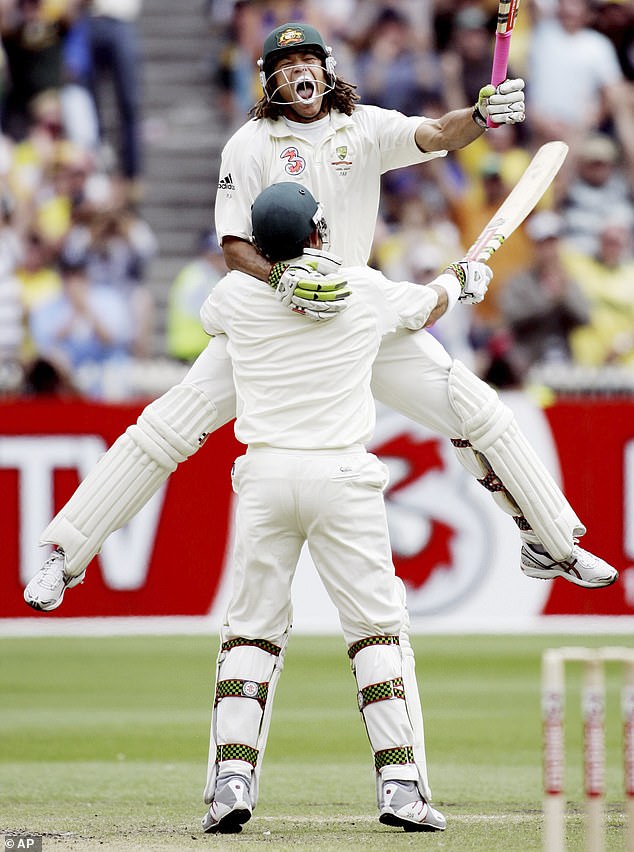 The innings that stopped a nation: Symonds celebrates with his mate Matthew Hayden as he scores his first Test century in a knock that saved the 2006 Boxing Day match for Australia 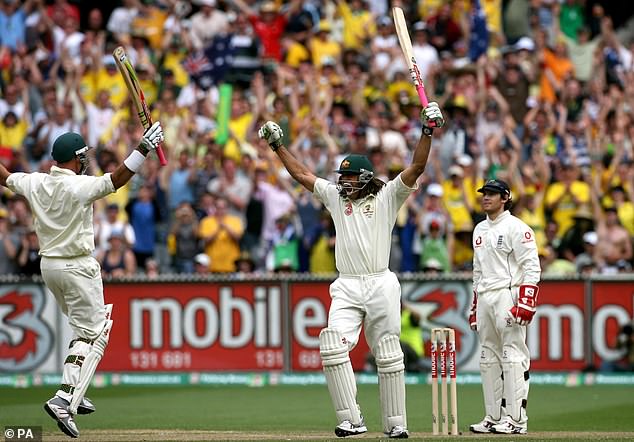 The all-rounder had been under pressure to keep his spot in the side coming in to the Test and responded in typically aggressive fashion, smashing a six down the ground to bring up his ton

Symonds was under pressure to keep his place in the side after getting out cheaply in his previous Test, and the Aussies were in dire straits as he strode to the crease with the score at 5/84.

What followed was possibly his finest moment in the baggy green as smashed the English attack and brought up his first Test hundred in typical style, hammering a six straight back over the bowler’s head before raising his arms in triumph and celebrating wildly with his great mate Hayden.

His knock of 156 was a huge turning point and Australia smashed the old enemy to the tune of an innings and 96 runs.

Symonds wasn’t an instant hit when he first made the country’s one-day team in 1998, struggling to nail down a place in an incredibly talented side – but that all changed at the 2003 World Cup.

Australia was struggling in the side’s first game of the tournament, down four wickets for just 86 runs against Pakistan, and in desperate need of a saviour.

Symonds was just that, turning the game and his career around with an unbeaten knock of 143 from just 125 balls as Australia won that match and every game after it to be crowned world champions. 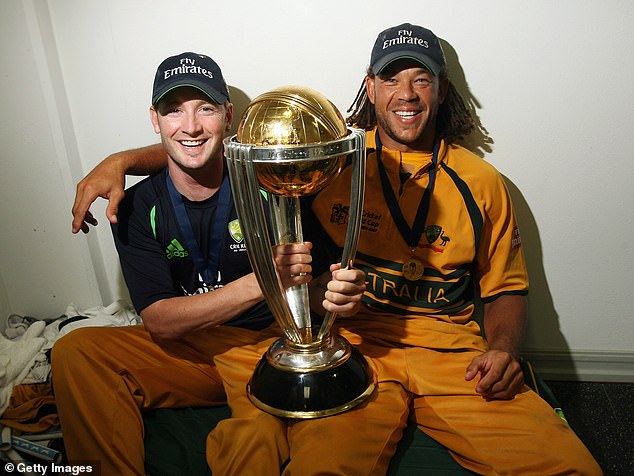 ‘Roy’ – seen here with Michael Clarke after Australia won the 2007 World Cup – was instrumental in the side’s 2003 triumph in the tournament, smashing a stellar 143 to dig the side out of a huge hole against Pakistan

The tournament transformed Symonds from a bit player for Australia into a mainstay of the team.

From 2007 to 2008 he smashed 777 runs in just nine Tests, recording his highest career score of 162 in a sensational innings against India at the SCG.

But that clash also featured one of the most controversial episodes of Symonds’ time on the pitch.

The Aussie accused Harbhajan Singh of calling him a ‘monkey’ during the Test, which saw the Indian spinner hit with a racial vilification charge.

In what became known as ‘Monkeygate’, the Indian team threatened to quit the tour altogether when Singh was suspended for three matches, before the ban was overturned by the International Cricket Council.

Symonds was livid with the handling of the incident and accused Cricket Australia of failing to back its players. He also said Singh had called him a monkey on several occasions before the match at the SCG and broke down in tears as he apologised to him for the slur – which the Indian star angrily denied. 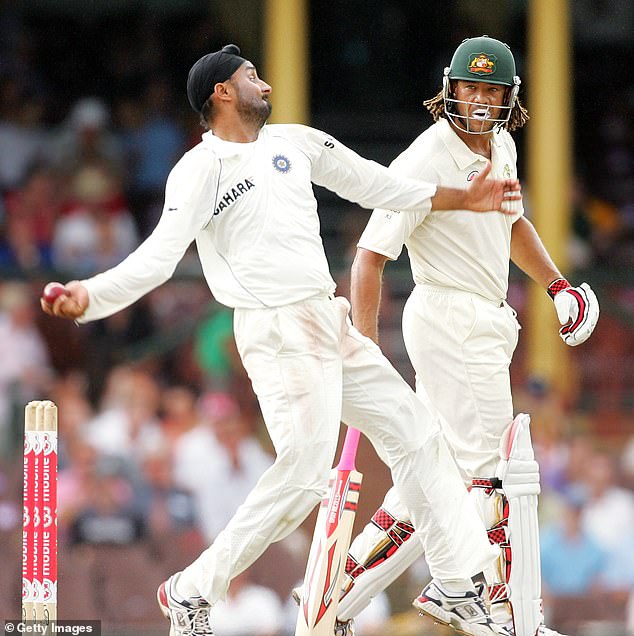 The ‘Monkeygate’ scandal of 2008 – when Indian spinner Harbhajan Singh (pictured) used a racial slur against Symonds – was a hammer blow to the late legend, who was furious with Cricket Australia for not backing him

The scandal left a huge mark on Symonds, who revealed in 2018 that it saw him turn to alcohol as a way of coping.

‘I started to drink heavily as a result of it and my life was starting to dissolve around me. I felt guilty that I’d dragged my mates into something I didn’t think they deserved to be involved in,’ he said.

The all-rounder generated global headlines of a different sort when he decked a streaker with a shoulder charge during a one-dayer in Brisbane in March 2008.

Symonds once considered a switch to rugby league and proved he wouldn’t be out of place in the sport by smashing the pitch invader into next week.

‘It was frustration more than anything,’ he told Daily Mail Australia earlier this month.

‘I wasn’t trying to hurt him, but it was a final and a tight part of the game. I’d just run Matty Hayden out and we’d just started getting back on track, but we were still under the pump.

‘He was an Aussie and he ran out and I’m thinking, “Mate, are you watching the game? You didn’t have to run out now; you could have saved it for later or done it when they were batting.”‘ 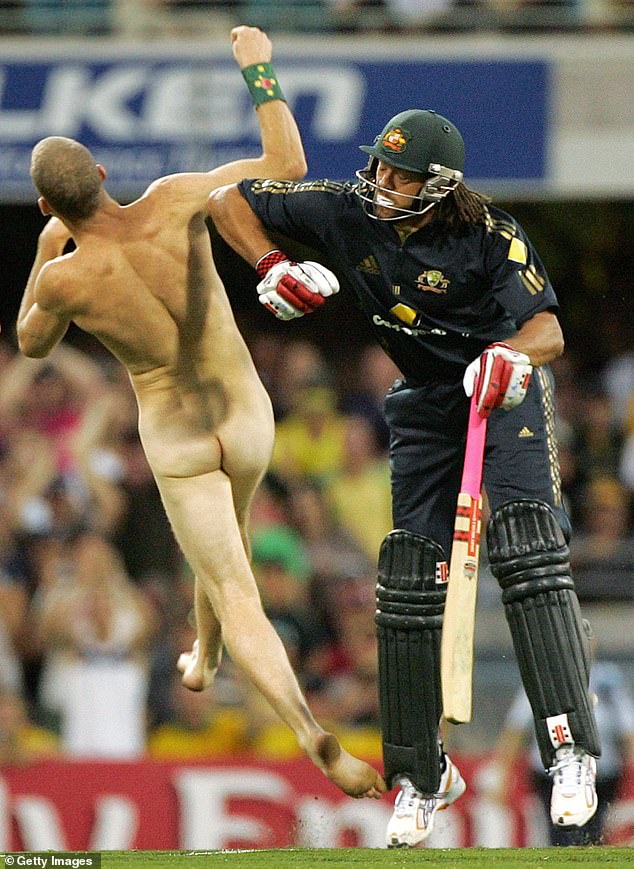 How to hit a streaker for six: Symonds made headlines around the world when he shoulder charged a streaker into next week during a one-dayer in Brisbane in 2008 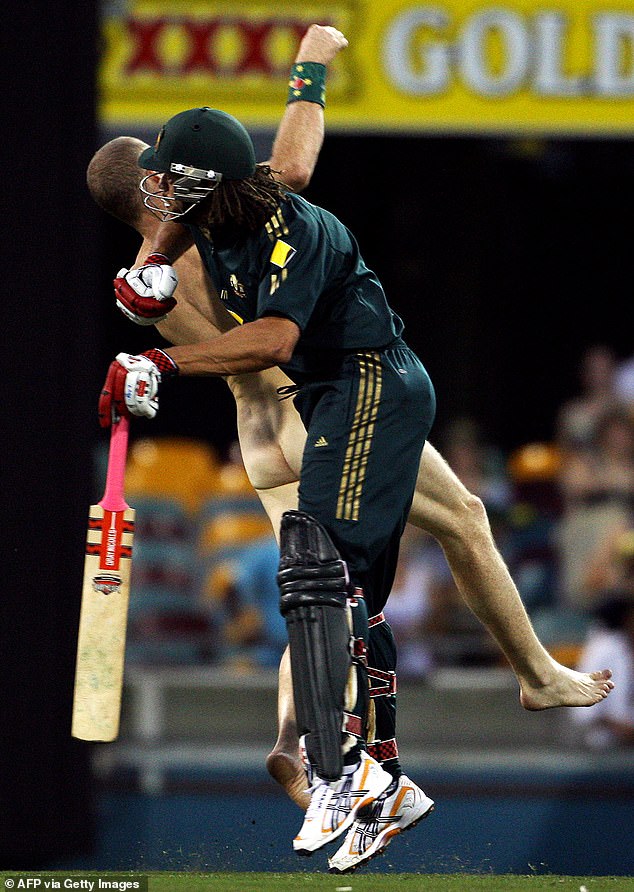 Earlier this month, in one of his final interviews, Symonds told Daily Mail Australia he wasn’t trying to hurt the pitch invader – but he definitely didn’t miss him, either

Later that year Symonds failed to turn up for a team meeting because he decided to go fishing instead. It led to a falling out with former mate Michael Clarke, which the pair never patched up.

He felt Clarke had betrayed him and to make matters worse, the pair had already had a bad run-in during a tour of the West Indies.

‘Our friendship was destroyed in that moment.

‘He’d said to me, not in these words, but he’d suggested I was a selfish player and a selfish person. The one thing I don’t consider myself to be is that and that really annoyed me.’

The pair traded barbs after they were both finished with their on-field careers. 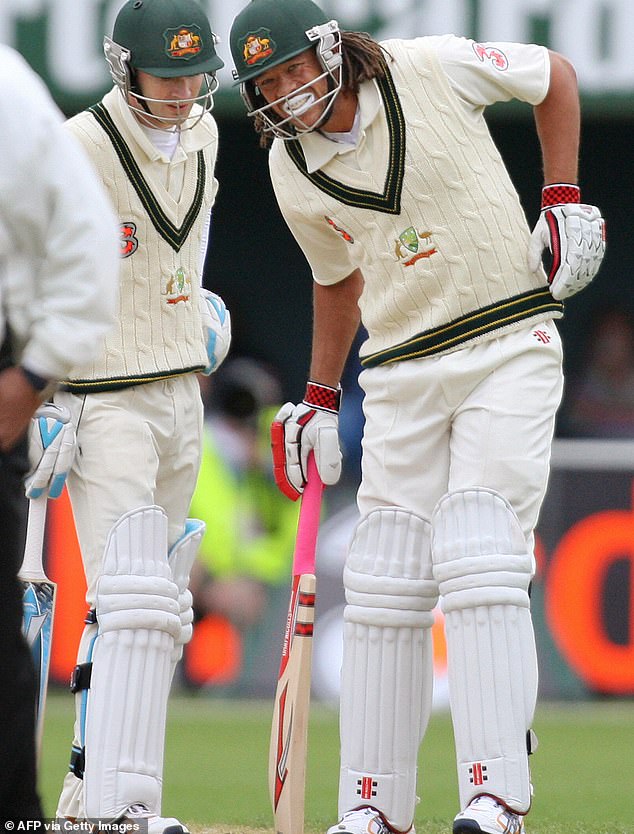 When Daily Mail Australia columunist Mike Colman asked Symonds how he felt the Channel 9 cricket coverage would go for the 2016 season he replied, ‘Well they’ve just hired Michael Clarke and Kevin Pietersen – the two most unpopular people in world cricket – so not too good I’d say.’

Former Test captain Mark Taylor summed Symonds up well shortly after learning of his death, saying: ‘He wanted to go out there and have fun and play the game he remembered to play it as a kid. At times he got in trouble for not going to training or maybe having a few too many beers but that is the way he lived his life and the way he wanted to play his cricket also.’

Sure, that love of a beer got him into trouble at times – most notably when skipper Ricky Ponting blew up because Symonds came to training badly under the weather in 2005… and told coach John Buchanan he’d played in a similar state before.

But how many cricketers would’ve had the talent to play in that state without being pulled up immediately because they crashed and burned on the pitch? Probably just a handful, and Roy was definitely among them. 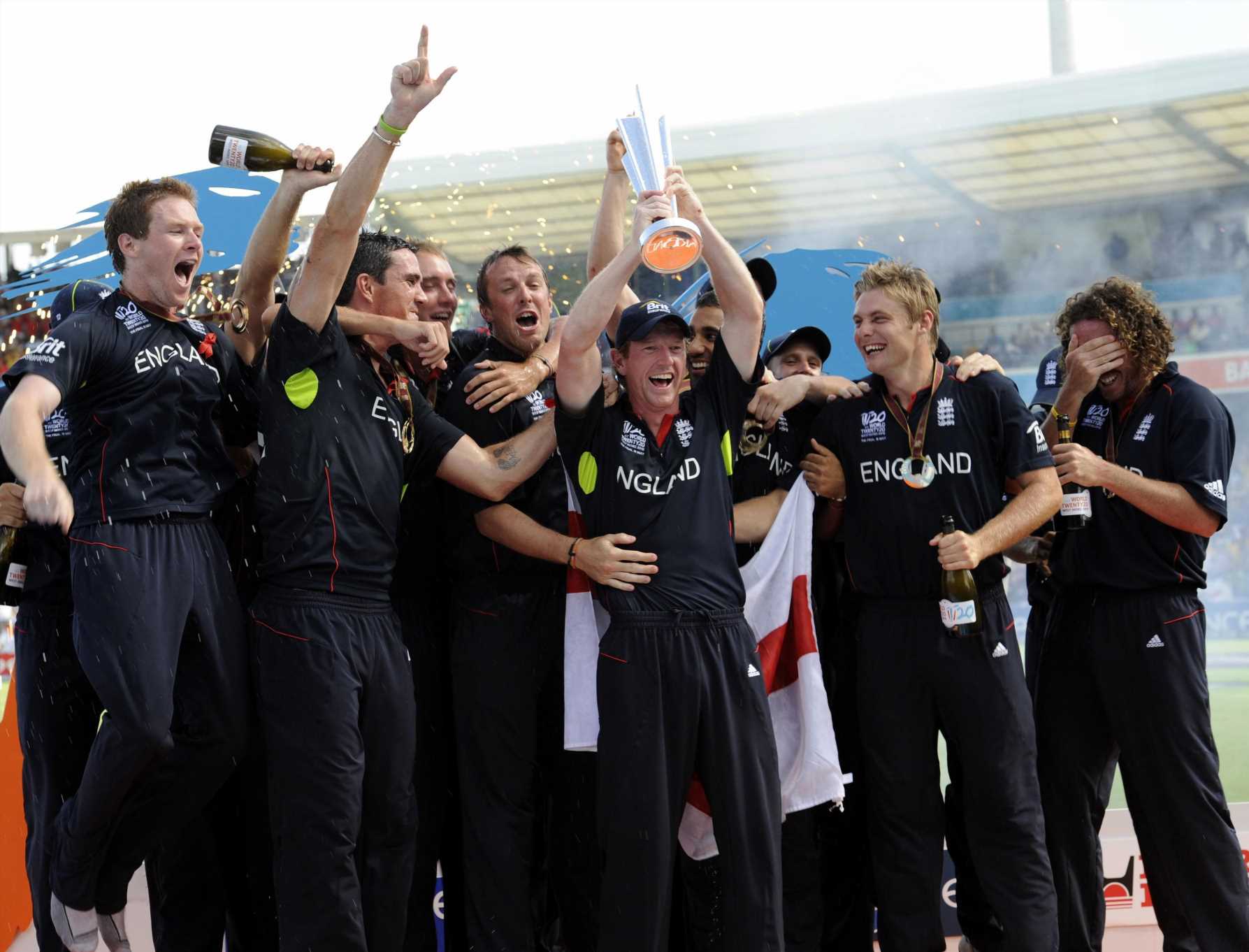 On this day in 2010: England beat Australia for Twenty20 World Cup final glory 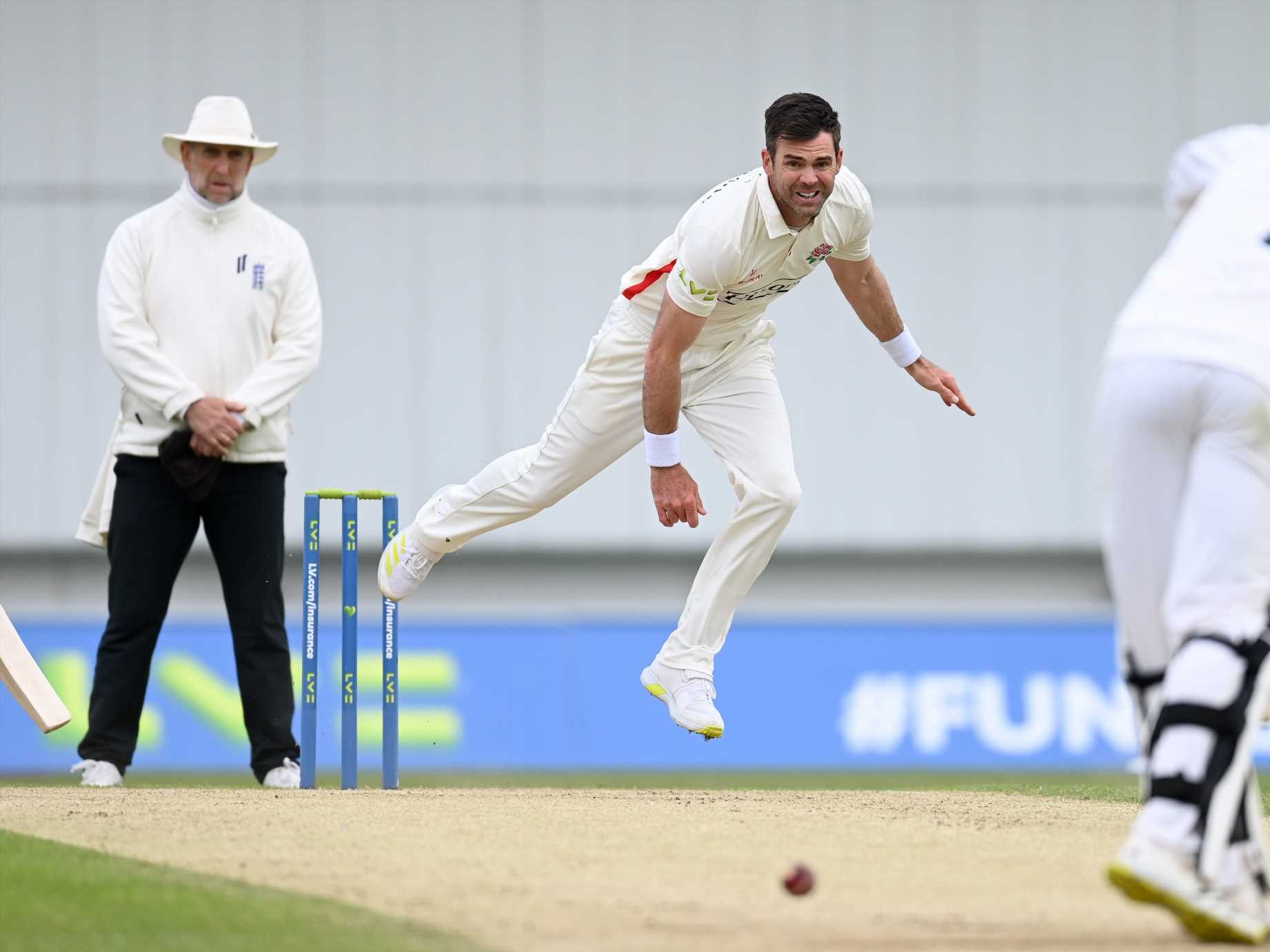