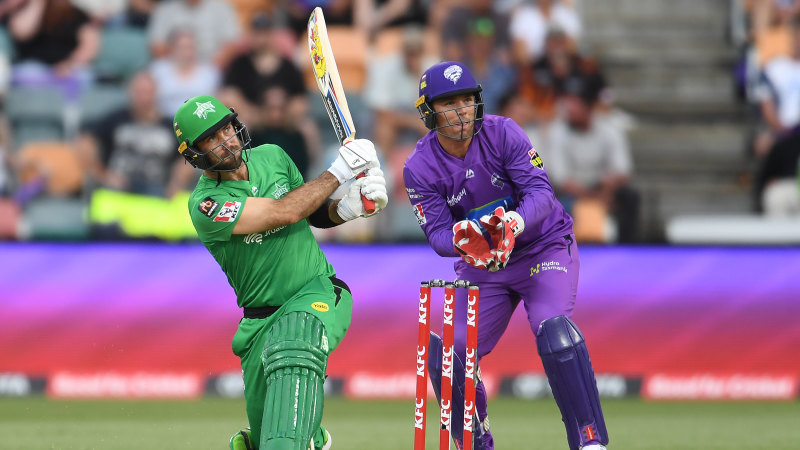 A batting masterclass from Glenn Maxwell wasn't enough for the Melbourne Stars to beat the Hobart Hurricanes on Saturday evening, with the Stars missing a golden opportunity to close the gap with sides ahead of them on the BBL ladder.

Set 165 for victory by the Hurricanes, Maxwell came in at No.4 and whacked 70 runs of 37 balls, an innings which included six fours and five sixes, including one stunning reverse-sweep six off the bowling of Johan Botha. 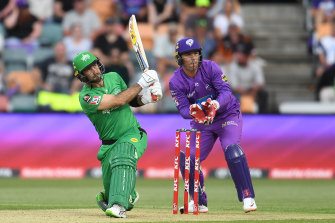 Glenn Maxwell belted 70 for the Stars but it was not enough against the Hobart Hurricanes at Blundstone Arena on Saturday night.Credit:Getty Images

But when Maxwell top-edged Botha straight to a Hurricanes fielder in the 14th over, with the score at 4-112, the task became much more difficult for the Stars.

Maxwell's dismissal followed that of Nicholas Pooran for 14, the pair's 72-run partnership the perfect anchor for the Stars' innings to that point.

The game's momentum swing was further solidified in the 16th over and 17th overs with the dismissals of Sam Rainbird and Liam Hatcher.

It meant the Stars needed 37 runs from the last 24 balls of the game, which triggered Melbourne to use their power surge.

Rainbird tried valiantly to get his side the win before getting caught in the deep off Scott Boland for 15, and in the next over Hatcher was caught off Ellis for five and a cracking yorker got Lance Morris bowled for two.

Prior to that, the Stars' bowlers did a fairly good job to back up their captain's decision to bowl first, keeping the Hurricanes to below 170 runs when it looked for the back part of their innings that they would pass that score.

Hatcher and Billy Stanlake were key in that respect during the 13th and 14th over power surge, where their opponents could only score five runs for the loss of two wickets.

Hatcher only went for three runs in the first power surge over, while Stanlake picked up the wickets of Ben McDermott, bowled for 31, and Nathan Ellis, out for a first-ball duck.

D'Arcy Short again failed to make a trademark big score, he was unlucky to be bowled for 12 in the second over by Maxwell.

Short dropped to his knee to sweep but the ball hit his bat then his leg and deflected onto the stumps.

That brought Dawid Malan to the crease and it was his 75 off 56 balls that allowed the Hurricanes their total.

His 50-run partnership with Colin Ingram (26) was brought to an end by Stanlake and Malan was caught in the next over, the 19th.

Lance Morris could have had Malan caught in the 16th over but the delivery was deemed a no ball.

Early in the innings Stars batter Nic Maddinson did not see the boundary rope and rolled his ankle on it while running to collect a ball that had already gone past the rope.

That put him out of the game (replaced by Morris) and added to the Stars' missing weapons, which include the injured Nathan Coulter-Nile and Adam Zampa, who was suspended last game for swearing.

The Stars have now lost three in a row, and play Hobart again on Monday.