Tim Paine was left stunned by a controversial DRS call that compounded Australia's woes with the bat, leaving the hosts needing another miracle from their prized attack to avoid defeat in the second Test.

Irrepressible India seized control of the game on Monday after another substandard performance by Australia's top six left selectors with more questions over the side's batting heading into the New Year's Test. 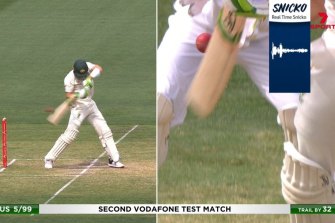 Tim Paine’s dismissal, and the Snicko sound reading that appeared to come after the ball had passed the bat.Credit:Twitter

Paine rescued his team in Adelaide but was denied the chance to do it again when umpire Paul Reiffel's decision was overturned despite seemingly inconclusive evidence from technology, which showed a spike in Snicko after the ball had passed the bat.

Paine was adamant he had not nicked it when the review was called, a view echoed by spin great Shane Warne, who believed the noise was created by the captain scraping his boot along the pitch.

"Light does travel faster than sound … that's why there is that little bit of timing difference," Taufel said on Channel Seven.

The Australians, though, were bemused the skipper was sent packing given they had been on the wrong end of a similar decision with the ball to Cheteshwar Pujara a day earlier.

Nathan Lyon is on a hat-trick in the second innings after Australia cleaned up India's tail, claiming the final five wickets for 32 runs only for the batsmen to falter again.

An inexperienced Australian batting line-up struggled two years ago but the return of David Warner and Steve Smith, combined with the rapid improvement of Marnus Labuschagne, meant this side had three world-class batsmen not available when the sides last met.

However, Warner is injured, Labuschagne is struggling being the hunted and Smith is a shadow of the batsman once hailed as the best since Don Bradman.

The superstar No.4 made eight, taking his series tally to 10 runs, with India increasingly confident they have a game plan to quell a man who usually makes life miserable for their bowlers.

Teams have paid a heavy price preying on Smith's pads but the Indians have turned his strength into a weakness, setting leg-side dominated fields to dry up his scoring. Attempting to squeeze a ball fine, Smith had his leg stump disturbed by Jasprit Bumrah.

Australia's second-tier batsmen continue to let them down, though Wade battled hard for 40 in the unfamiliar role of opening.

Travis Head threw his wicket away on 17, flashing at a wide one from Mohammed Siraj, while Burns's technique was exposed again, caught behind for four. Worse still, he squandered a review.

"If [David] Warner comes back then, unfortunately, I think right now it probably has to be Burns that goes," Ponting said on Channel Seven.

"I think the next Test is on the seventh, so plenty of time for him to get fully fit. With his record, David Warner walks back into the side."