A leading TV rights experts has urged Cricket Australia to get to the negotiating table with Channel Seven, saying there had been a "significant" drop in the sport's broadcast value in the COVID-19 world.

CA interim chief Nick Hockley and his Seven West Media counterpart James Warburton will on Thursday meet face to face for the first time since the dramatic escalation in the media rights war between the game and its broadcast partners. 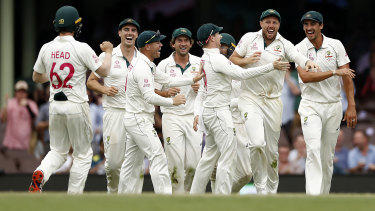 New world … COVID-19 has thrown cricket – and its broadcast partners – into disarray.Credit:Getty

It was all quiet on the TV front on Wednesday as CA's top brass, including chairman Earl Eddings and Hockley, spent the day discussing Jolimont's next move in a feud that has serious implications for all levels of cricket.

A cricket source has indicated the game will have a better gauge of the situation after the meetings with Seven and Foxtel.

Those in the game have believed Seven has played a more aggressive game in public than they have in talks behind the scenes.

Seven has been on the front foot publicly throughout the saga but are now tight-lipped, believing the ball is firmly in CA's court.

The debt-laden network paid only a part of the $25 million instalment it was due to provide to CA on Tuesday, effectively valuing the free-to-air rights at a quarter of their $82 million annual value.

Warburton wants CA to appoint an independent expert to determine the "fair value" for the upcoming season, the schedule for which is yet to be finalised.

Seven believes the quality of this season is not up to previous summers and therefore warranting a reduction in fees. CA, however, believes they will deliver their side of the bargain with a full international and Big Bash League program.

TV rights expert Colin Smith, the managing director of Global Media and Sports, says the prospect of matches with reduced attendances and the possibility of more of Australia's best players being unavailable for the BBL meant the rights were not worth as much this season.

"It's right to say the balance sheets of Channel Seven and Foxtel are challenged, but it's also a reality that broadcast rights are going to reduce," Smith, who has advised some of the country's major sports in their deals, said.

"I can't give you an exact answer. I could if we did some work on it. But the value isn't the same as it was two years ago. It would be a significant amount [lower]."

But Smith believes they are higher than what Seven have offered after it declared it would not pay another cent.

"I think it's a line in the sand," Smith said. "I don't think that value is a true value, I think it's undercooking it."

Smith said it was in CA's interests to reach a compromise with Seven, whose move on Tuesday was effectively a strategy to get the governing body to go to court or to renegotiate.

"What CA needs is to seek a remedy to the breach, but not walking away from the contract," Smith said. "If you follow my logic and the actual value of the rights has dipped, then if you went to market that's when you could really get hit in this world.

"[Nine chief] Hugh Marks has said he's still interested in cricket, but he then caveated that by saying what value.

"I think the best solution is to work out a compromise, which is exactly what the NRL and the AFL have done. It would mean the value would be lower."

Vale Dean Jones, still with so much to give

Celts ‘relax,’ take control in 2nd half to stay alive