Geoff Lawson reckons it would be nothing short of extraordinary if Sean Abbott were to one day play Test cricket.

“It’s remarkable where he’s at,” the former Test paceman says. “No one in our lifetime has had to go through what Sean Abbott had to go through. So to come out the other side is a story in itself.” 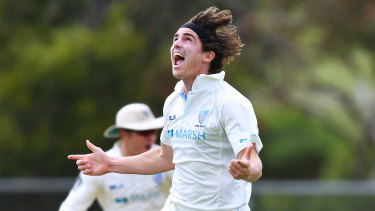 Sean Abbott enjoys success on a flat pitch in round one of the Sheffield Shield in Adelaide. Credit:Getty Images

It was a polite inquiry. The 28-year-old from Parramatta is well aware of the almighty roadblock between him and a baggy green. The barrier is close to home: state teammates Pat Cummins, Josh Hazlewood and Mitchell Starc are such proven international performers they are virtually guaranteed selection, and knock him out of the Blues side if they’re all back in town.

But with a larger-than-usual Test squad of as many as 16 players to be chosen for this summer’s series against India because of the requirement for players to be in a bubble, Abbott is in the mix for a place.

The answer that day in the UK from Bailey, with whom Abbott played T20 cricket in Canada last year, was the selector’s staple: keep taking wickets and scoring runs, "you're trending in the right direction”.

It's fair to say Abbott did more of that with a fine start for NSW this season, having to think outside the square to take 6-89 on a road in suburban Adelaide as well as scoring an unbeaten 60 in the Blues’ first-up draw against Western Australia. 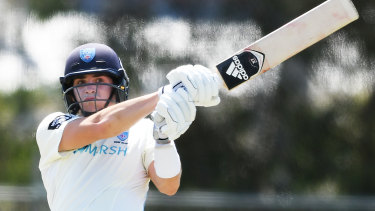 Abbott hits out in Adelaide.Credit:Getty Images

“I think I’ve probably put better numbers on the board in white-ball cricket over the years and only just sort of finding a bit more form and momentum with the red-ball stuff,” Abbott says ahead of NSW’s Sheffield Shield match against Queensland starting on Friday.

“Obviously playing Test cricket is a dream of mine but it’s pretty daunting when you think about Cummo, Starcy, Hoff [Hazlewood], Patto [James Pattinson], who are four of the best bowlers in the world and have been doing really well. And then you’ve got guys like Jhye Richardson and ‘Nes’ [Michael Neser], who takes wickets every game and scored a hundred last game. Australia's bowling stocks are pretty good at the moment.”

Listening to Abbott speak over the phone from the serviced apartments where NSW are staying in Adelaide, it seems having a strong support crew around him has lately been just as important as anything cricket-related.

Abbott has a coffee machine set up in his room in Adelaide and has a queue of teammates making their way in for a cuppa and a chat each day.

“With Andre, we don’t really do much technical stuff. We’ll have a few cues here and there but we very much focus on how to get our thoughts and thinking and language in the right space to perform,” Abbott says.

“That’s been the biggest thing for me. It might not get other players going but it’s really worked for me. And even having that space with Andre to even talk about things away from cricket … I had him in my room this morning, I’ve got the coffee machine away with me and we were talking about coffee beans, and extracting good coffee and settings.

“To be able to have that space whilst in a bubble like this, I’m really grateful for. And I've got that with a couple of other guys as well, it’s a really strong group of guys at the Blues. I’m pretty fortunate for that.

Lawson, who still speaks regularly to Abbott and is a member of the same golf club, marvels at his development on and off the field.

“He’s playing some good cricket and he’s maturing as a leader within the NSW group, which was something which was considered unlikely four or five years ago,” he says.

“He’s now become a senior player in that group particularly when Starc, Cummins and Hazlewood are away. He makes me smile every time I see him. Cricket wise, personally, he’s a young man to be proud of.”