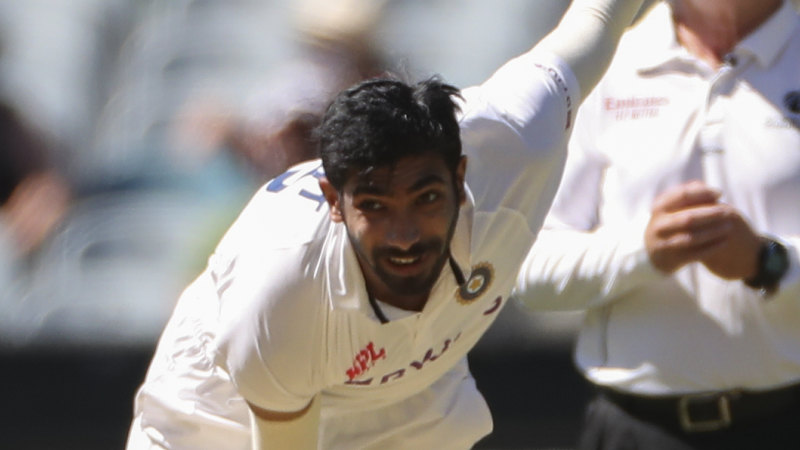 Australia's hopes of regaining the Border-Gavaskar Trophy in the series-deciding clash in Brisbane this week have been buoyed by the reported absence of Indian spearhead Jasprit Bumrah.

The Press Trust of India reported on Tuesday that Bumrah has an abdominal strain. 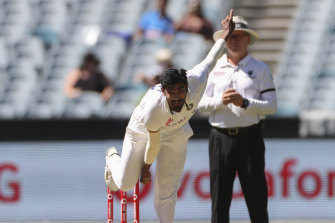 Jasprit Bumrah is set to miss the fourth Test.Credit:AP

"Jasprit Bumrah suffered an abdominal strain while fielding in Sydney. He is going to sit out of the Brisbane Test but is expected to be available against England," a BCCI source told PTI.

Bumrah, with 11 wickets at 29.36, appears set to join a long list of Indian injuries and absences, leaving the tourists all but running on fumes.

"The all-rounder will now consult a hand specialist in Sydney before he returns to India," the BCCI said in a statement.

Batsman Hanuma Vihari, who bravely helped save the drawn third Test at the SCG by surviving 161 balls, predominantly with a hamstring tear, is in doubt. Rishabh Pant and Ravichandran Ashwin are also battling problems. Pant could not keep wicket in Australia's second innings because of a left elbow injury, while Ashwin, who survived 128 deliveries in a rearguard display, has a back problem.

Bumrah's injury comes as Will Pucovski remains in doubt for the Gabba clash, which could force Australia to unveil their fifth opening batsman of the series.

Pucovski was sent for scans on his right shoulder on Monday after he landed awkwardly while diving in the field on Monday. Cricket Australia was set to provide an update on Tuesday.

Should Pucovski not play, Marcus Harris would come under serious consideration to finally play, having been bypassed through the opening three Tests. Harris played the last of his nine Tests on the 2019 Ashes tour.

In a summer of tumult, the home side has already had Joe Burns, Matthew Wade, David Warner and Pucovski at the top of the order, with two different combinations.

Warner returned from a groin injury in Sydney and made 5 and 13. He has yet to fully recover from the injury but team sources said on Tuesday he was fit for selection in Brisbane. Warner had flagged that he could miss the Gabba clash should he have not pulled up well in Sydney but that has has not become a major issue.

Matthew Wade is suddenly under the microscope after a double failure of 13 and 4 in Sydney in his return to the No.5 spot. Wade was selfless in agreeing to be a locum opener earlier in the series but he has been overly aggressive at times through the series, and been dismissed just when he appeared set.

Coach-selector Justin Langer said after Wade's first innings dismissal in Sydney, when he was caught at mid-on having charged Ashwin, that he had "a lot of faith" in the Tasmanian. But the bottom line is that he hasn't reached 50 in his past 12 knocks at Test level since November, 2019.

Travis Head was axed for the Sydney Test because he had failed to heed the lessons from being caught behind the wicket so it would be a gamble to recall him so quickly.

Team sources said frontline quicks Pat Cummins, Mitchell Starc and Josh Hazlewood would have the option of being nursed through the week because of the quick turnaround. While they have benefited from having all-rounder Cameron Green in the side, Hazlewood and Cummins had a particularly heavy workload, with the former delivering 47 overs and the latter 47.4 overs.

Former Australian fast bowler Damien Fleming said the Australians had over-attacked with the short ball during India's second innings in Sydney and needed to recitfy this in Brisbane.

"It was a bumper barrage, which I don’t mind forcing batsmen back, but then you've got to for the lbw or the bowled or the nick behind," he said.

"It really wasn't until the end of the day that Mitchell Starc started bowling full, we get the edge that Paine dropped and had some missing the outside edge."