Cape Town: Having cruised through the past 12 months in T20 cricket, Australia find themselves under the pump with a series-decider in South Africa to provide an early taste of the pressure that will come with hosting the World Cup.

The Australians were left bruised after a middle-order collapse in Port Elizabeth cost them the chance to take out the series. 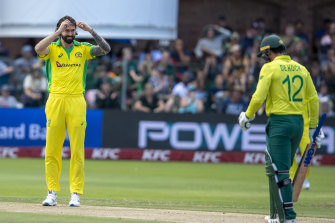 But there's also a view that a do-or-die game three in Cape Town on Wednesday night will provide valuable exposure for the tourists after clean sweeps of India, Sri Lanka and Pakistan last year.

Australia have never bettered their runner-up finish at the T20 World Cup in 2010.

While the current side is strong on paper, success in the shortest format can often come down to how well teams handle all sorts of match situations.

Australia's women had considerable expectations placed upon them before their shock opening-round World Cup loss to India, and Aaron Finch's side will face similar pressure when the men's tournament rolls around in October.

"That's the point, I assume, of these series, to try and emulate that going forward into a World Cup," paceman Kane Richardson said.

"I know a week ago, England and South Africa were in that same position in the third game so it's valuable experience for everyone. Just try and learn from it and win on Wednesday night.

"We obviously want to win every game and win every series but I think looking forward, the big picture view is if we can get those chases right in a World Cup final or a semi or something like that, then we'll take the experience now."

Australia had looked to be home free in Port Elizabeth when David Warner (67no) and Mitch Marsh narrowed the equation to 25 off 18 balls, but the tourists lost three wickets in quick succession with Warner stranded at the non-striker's end.

Richardson said South Africa's valiant effort to snatch victory from the jaws of defeat had left the Australians stinging.

"The change room right now is pretty down but I think everyone knows there's an opportunity to learn from it and go out on Wednesday night and win a series," he said.

"If in Australia we come up on a pitch like that, we've got to learn from it. But to be fair they bowled and fielded very well, especially compared to the other night. They came up and about and ready for it.

Richardson is aware he has little margin for error if he wants to be part of Australia's T20 World Cup campaign later this year, having spent the better part of 12 months in the white-ball wilderness after being dropped midway through 2018.

"I've just got to perform, because my name isn't as big as those other guys," Richardson said.

"When you talk about Cummins and Starc, they do it a little bit differently. I'm probably not as sexy as those guys in terms of they bowl 145km/h plus.

"That type of wicket (in Port Elizabeth) suits me perfectly because I can bowl those variations. But it's just something I've got better at … I wanted to run in and bowl as fast as I could when I was 21 and I think you just learn over time you've got to be a bit smarter."

While a maiden T20 World Cup berth is Richardson's to lose, Australia also have Sean Abbott and Jhye Richardson in reserve in South Africa and a hungry Josh Hazlewood waiting in the wings.

"If I keep getting picked and I keep performing, I think I'll be there," Richardson said.