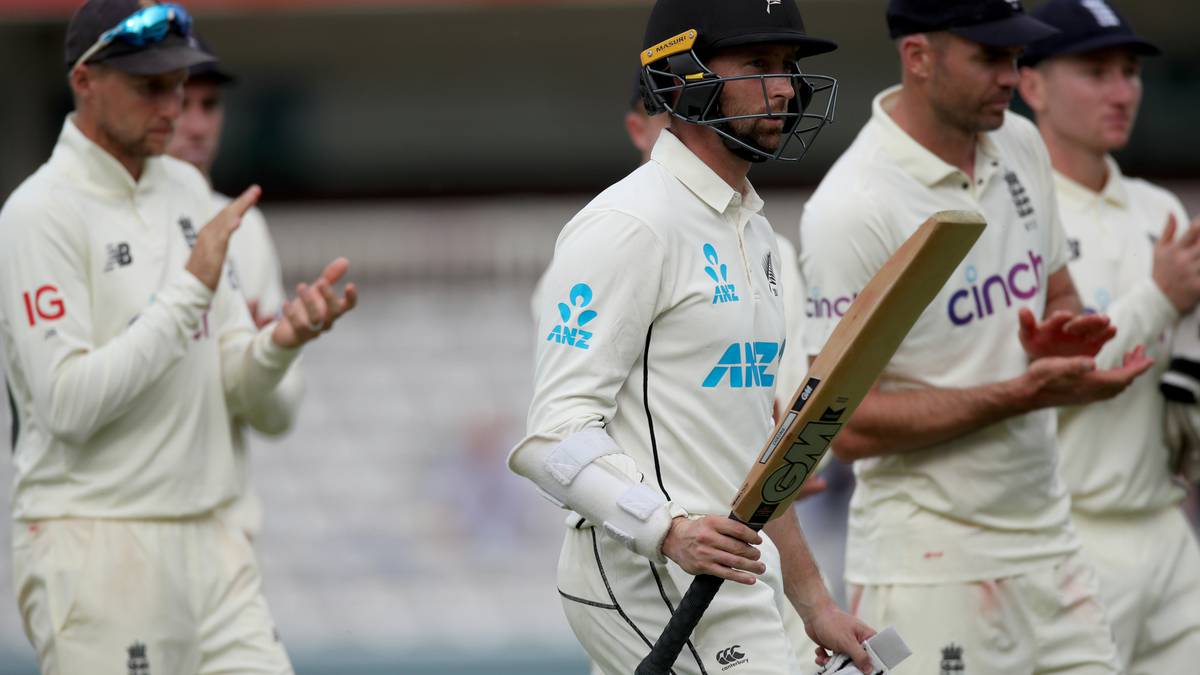 Newly-named opening batsman Devon Conway and his cool and calm stroke play dominated the British media’s review of the first day of the opening cricket test between the Black Caps and England at Lord’s.

Making his long-awaited debut in test cricket, the 29-year-old Conway wasted little time proving his worth at the top of the order for New Zealand with a masterful performance, with an unbeaten 136 featuring 16 boundaries, propelling New Zealand to 246-3 at stumps.

It’s a near-perfect start to a match that, if successful for the Kiwis, will be a rare scalp on the famed home of cricket.

Englishman Mike Atherton – a top-class opening batsman during his international career from 1989 until 2001 – told Sky Sports UK Conway’s innings was as good as he’s ever seen.

“I can’t think of an opener in this country, on debut, who has played better in recent times,” he said.

“He [Conway] was incredibly assured and skilful. If you think back to the start of the day, there were bound to be some nerves jangling around, he was starved of the strike for 20 minutes but he didn’t look like that affected him at all.”

The Guardian’s Simon Burnton said Conway’s debut in the red-ball game was worth the wait for cricket fans.

He describes Conway as “New Zealand’s latest international sensation” who “showed no signs of nerves”.

“It was a stunning debut, but Conway does not seem the type to get carried away.”

Burnton added Conway’s sparkling performance was expected by those who have watched him at domestic level and in limited-overs international matches.

Stephan Shemilt of BBC Sport said thanks to Conway, England were reminded of how well they’ll need to bat to get back into the contest.

“He [Conway] immediately looked at home at this level, with flowing cover drives a feature of his innings. There was a period of discomfort against some short bowling from Wood, while an edge fell short of third slip on 45 and another was tickled past leg slip on 77, but neither could be classed as a chance.

As for the match, Shemilt said it shouldn’t be a surprise that New Zealand poses a threat, and are forcing the hosts to work hard.

“Although they have not won a test series in England for 22 years, New Zealand were always likely to be stiff opposition.

“This is the first home test since 2012 that England have not chosen a specialist spinner, and losing the toss meant their four fast bowlers were faced with the prospect of a day’s hard graft.”

Former England batsman Nasser Hussain – who was present in commentary as well – chipped in on the Conway compliments in a column for the Daily Mail.

“Conway played a lovely innings, in which he let the bowlers come to him, and batted on his test debut as if to the manner born. And England’s bowlers put in a challenging shift on a difficult surface… In Conway, they had just the player to make good use of a nice batting strip,” Hussain said.

The South African native’s heroics lay a controlled foundation for the visitors after one day at a ground they’ll likely be exorcising some demons from thanks to some unwanted memories.

It is nearly two years since the Black Caps’ heartbreaking Cricket World Cup final defeat to the same side in the 50-over format, but as Sky Sports UK notes, New Zealand “are buoyant now with Conway’s century giving them a strong start in their bid for a seventh test win in a row and just a second test victory at Lord’s”.

New Zealand will resume on day two with Conway and Henry Nicholls at the crease, and seven wickets in hand with 300 well in their sights before lunch.