Cricket Australia is monitoring the fallout from the coronavirus outbreak in South Australia, but says there is no reason to think next month's Test series opener against India is in doubt.

South Australia's Chief Public Health Officer Nicola Spurrier revealed on Monday that the number of locally acquired cases had leapt from four on Sunday to 17, leaving contact tracers scrambling to keep the cluster from spiralling out of control. Of the cases, 15 are understood to be linked to one family. 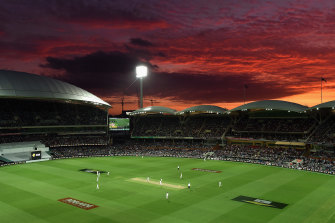 The first Test is due to be played at Adelaide Oval from December 17.Credit:Getty Images

The outbreak has forced dozens of people into isolation and seen several businesses close.

This comes only a month before Adelaide is due to host the blockbuster first Test against India, from December 17. Cricket Australia officials were in contact with key decision-makers in Adelaide on Monday but there was no suggestion the Test – at this point – was in doubt.

"There is ongoing monitoring but that's the end of the story," a CA spokeswoman said.

One major fear for cricket authorities would be if the relaxing of border restrictions was delayed. Another issue would be if further restrictions in South Australia were introduced, resulting in a drastic drop in crowd sizes. Current restrictions cap crowds at 50 per cent capacity, leaving 27,000 tickets available per day. The match is sure to be popular, particularly because it is the only Test that Indian skipper Virat Kohli is due to play.

Should Adelaide be unable to stage the pink-ball clash, Sydney is the natural replacement, for both teams will already be there because of the preceding white-ball series, with matches to be shared with Canberra. The second Test will be held in Melbourne.

The WA government has changed its quarantine rules for South Australian visitors in the wake of the outbreak. On Monday, the Northern Territory declared South Australia a hotspot. SA is still planning to open its border to Victoria from December 1.

The Indian squad and those Australians who took part in the Indian Premier League in the United Arab Emirates began a fortnight of quarantine in Sydney last Thursday, and will be released a day before the opening one-day international at the SCG on November 27. Both squads will remain in a bio-secure bubble through the entire white-ball series and four Tests.

Adelaide hosted the opening four rounds of the Sheffield Shield with all teams confined to a hub.

The Victorian squad arrived at a time when Victoria was in lockdown, prompting, in part, SA authorities to enforce tougher restrictions on the team and its staff. While this then led to a revised Shield schedule, the matches were held without incident.

South Australia senator and Trade Minister Simon Birmingham said on Monday he hoped the outbreak would not become a second wave and spiral "out of control" as it had in Victoria.

"What we need to do is make sure that South Australia's response is comprehensive in terms of how quickly they move to isolate people and to date we do know they have isolated large numbers of people," Birmingham said on Channel Nine's Today.

"The contact-tracing operation is already very, very large. I'm certain there will be, yes, more cases and more isolations to come, but that doesn't mean it spirals out of control like Victoria.

"We want a NSW-type response here where it is absolutely isolated and quarantined as quickly as possible."

The need to host all international and domestic series and tournaments in hubs this summer has weighed heavily on CA, which estimates it will have $120 million in lost revenue and costs. The governing body hopes an expected easing of restrictions after Christmas will boost its bottom line.